Newlyweds Alvaro Porras Loza and Maricruz Martinez Hernandez moved in early June from the Kansas City area to work the farm fields of New Haven, a town that hugs the banks of the Missouri River and stationed about an hour west of St. Louis.

The couple lives in a blue two-story house with six rooms, dark original hardwood floors and central air conditioning. The house sits in the middle of a neighborhood block with historic homes owned by permanent residents. It’s modestly furnished, but spacious.

Trailers with window units are often the norm for migrant workers in Missouri.

Loza, 50, and his wife of roughly a year, Hernandez, 41, took jobs in the New Haven area picking zucchini, cabbage and cucumbers. They will harvest eggplants, corn, peppers and tomatoes into early winter, they said.

“If you work on the farm or the field, I just say to look for a good place to stay, good housing, and good salary and ask for the farmer to treat you nice,” Loza said in English. “We came to this country to work. But we are not animals, we are humans and we deserve fair treatment.”

Loza is among Missouri’s estimated 15,000 migrant workers who work in the orchards and fields that make up the state’s $9 billion agriculture industry. Because he has family in Missouri, he’s also among other workers who try to stay in the area nearly year-round. 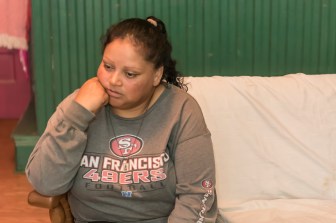 Loza and Hernandez call Missouri home nowadays, but it’s a world away from Mexico, their birthplace.

In June, when the couple was interviewed, they said that they each worked anywhere between 55 to 60 hours per a week and had Sundays off. During many workdays, they said, the heat index would push close to 100 degrees late some afternoons.

Loza and Hernandez said that they made about $11.50 an hour and earned bonuses if they continued working on the farm until the end of the harvesting season. The bonus: an extra $1 for each hour they worked.

“I don’t like to work inside, like in a factory. I like to work outside,” Loza said in fluent English. “I grew up on the farm and used to pick melons and worked for hours.”

He added that getting used to the heat is usually the hardest part and the most common complaint he hears about the job, to which Hernandez nodded in agreement.

In late June, the couple only had two housemates: Ryan Wilson, a 22-year-old white man from Lexington, and Moises Salvador Santoyo, a 25-year-old family friend from Michoacán, Mexico.

By the end of August, the four were joined by six to eight other workers as the season started to pick up for harvesting. That would bring the household to a total of 10 to 12 people at times.

Still, the housing was one of the more luxurious living arrangements when it comes to field work, Loza said. 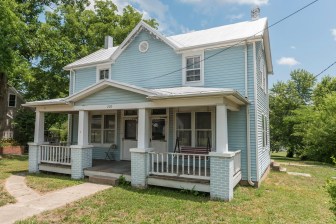 Alvaro Porras Loza, 50, his wife and several others live seasonally in this home in New Haven, Missouri. Photo taken on June 25, 2016.

“This place and the orchard area is better, but I have family in other parts of Missouri and the country and it’s rough,” Loza said.

The pay is usually better in Missouri than in the Southwest and home countries, Loza added.

Some workers have reported that jobs in the Midwest pay hundreds of dollars more per week and have more perks such as free housing. As part of their agreement to work in New Haven, Loza and Hernandez do not have to pay rent or utilities, and they are provided a car for transportation and a room to themselves.

Loza said that he has been in migrant labor long enough to know where he can work best and, through trial and error, has found that Missouri has better jobs than other states closer to Mexico.

Loza first came to the U.S. from Guanajuato in 1980 to pick carrots, onions, watermelons and melons in Texas. He was 14 years old, he said. He gained citizenship in 1986 through the bipartisan Immigration Reform and Control Act that Republican President Ronald Reagan signed into law.

“It only cost $75, and then that was expensive,” Loza chuckled. Then, he worked in farms in California picking lettuce, broccoli, asparagus and grapes.

In 1994, he took a job near Lexington, where he was hired by a local orchard to pick apples and recruit other labor – sometimes as many as 100 people. There, he also fell in love, got married and had four children.

During the decade he worked at Kerr Orchards, the farm owner housed Loza and his family in their own apartment with a washer and dryer.

Loza was in charge of making sure that all the living quarters for the workers on site were in good shape. It was something he said he took pride in while recruiting others, given the poor conditions workers face in other parts of the industry he had seen.

Motivated by a change in management, Loza then pivoted from working in the fields to working in maintenance at football stadiums in Missouri. That led to Loza exploring contract jobs for landscaping companies laying sod at venues throughout the Midwest.

After a divorce three years ago, Loza moved to Iowa for work. Shortly thereafter, while on a visit to see his kids in Lexington, he met Hernandez at a party. She came from Monterrey, Mexico, to work in the Lexington fields.

“This place and the orchard area is better, but I have family in other parts of Missouri and the country and it’s rough." - Alvaro Porras Loza

Eventually, the two reconnected in Iowa working on a farm. They fell in love, traveled together while working and got married in August 2015.

But the pair has experienced several hardships.

Hernandez, who worked in housekeeping for the owner instead of in the fields, initially was told she would have a separate room because she was the only woman.

But it could have been worse, Loza said.

“I have the advantage of knowing where else to look and who to speak with,” he said.

Loza has been able to avoid some of the more exploitative behavior he’s heard about from colleagues. And like others, he declined to name employers with bad behavior over concerns that he won’t get hired for future jobs.

“When you talk to the owner, you have to say, this is what I am looking for, and if they can’t offer it, then it’s time to go,” Loza said.

Loza has since returned to his roots working in the fields, this time in New Haven.

A contact in the industry called him offering work and asking for help recruiting others.

Loza said that often white male owners who seek migrant labor and his help in recruiting workers specifically ask for “Spanish people” because, he’s been told, Latinos are generally less demanding and more productive than other groups they hire. Migrant advocates interviewed about the claim said farm owners’ mentalities could also result from other groups better knowing their workers’ rights and being able to push back on exploitation.

In winter, the couple will migrate to Loza’s sister’s home in Bakersfield, California, to work and await the next season in Missouri.

With no children together, they have some mobility.

Wilson, Loza’s white housemate, jokes he is spiritually half-Mexican because he loves working with the Latino community. He wanted to earn some extra cash as he and his fiancé have a baby on the way.

“El gringo loco,” Loza said with a laugh, explaining that is Wilson’s nickname on the farm, a non-derogatory name which translates to a person, usually an American, who is not of Latino descent.

“These people work hard,” he said.