Gabriel and Sara Ruiz, husband and wife, were neighbors who fell in love and moved from Michoacán, Mexico, to California in the early 1990s to work on farms with hopes of realizing the American Dream. They brought with them their two children, Gabriel Jr. and Maria.

The married couple picked grapes, oranges and olives. While in California, Sara gave birth to the couple’s third and final child, Julio.

“Working in the fields is a tough job,” Sara said in Spanish. “Years ago, I first worked in a meat packing plant but hurt my back and was ran off that job.”

Ever since, Sara said that she could no longer work in the fields and instead has been relegated to packaging fruit, because it’s a lot easier on her body. But even after gaining citizenship, her husband kept working out in the fields because “that is what he knew best and liked the most,” she said.

Now their bodies are breaking down and they are wondering how they’ll get Julio through school and one day retire. 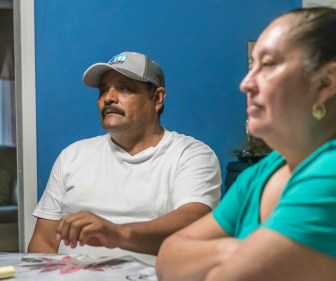 Gabriel Ruiz and Sara Ruiz at their home in Waverly, Missouri, on June 21, 2016.

There has been some choice in their lives as migrant workers, such as moving to Waverly, Missouri, in 1997, where the elder Gabriel took a job working year-round at an apple orchard there. From there, he went from a migrant farmworker working seasonally to a full-time farmworker.

The area is touted as the “Apple Capitol” of Missouri. It’s a far cry from Mexico, and the Ruizes were one of the few Latino families in the area at first, but there was something quite familiar about the area’s rural nature that reminded them of home, they said.

Now, there are about 15 Latino families living in Waverly year-round, Sara estimated.

All members of the Ruiz family are now American citizens or have attained permanent legal status.

During an interview over the summer, Sara recounted their lives over the past 20 years.

She worked seasonally on local orchards to augment her family’s income, while also caring for her children.

The family of five lived in a trailer on the orchard’s property — a common incentive farmers offer up to entice workers — allowing the couple to save on rent. They had enough money to help their kids cover school expenses for college and have had a relatively stable life.

“It was hard and sometimes we barely had enough to pay for books for Maria’s school,” Sara recalled in an interview in Spanish. “But we made it.” 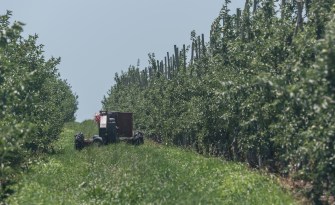 The younger Gabriel, 31, went on to work at a meat packing plant nearby, eventually moving into management there. Maria, 26, became a nurse and is now married with two children.

But life in America hasn’t gone according to plan at times, especially trying in the past year.

In December 2015, the elder Gabriel’s job, which provided the family’s chief source of income, was eliminated. He was given a few weeks to move his wife and two youngest children out of the trailer they had called home after nearly 20 years in service to the orchard.

The cost for treatment was $18,000, a bill the family is still struggling to pay despite health insurance coverage. The family had recently signed up for health insurance through the Affordable Care Act, but the hospital is still deciding how to apply their coverage.

With no home, a jobless husband and limited language and educational skills, a recovering Sara took matters into her own hands.

“Working in the fields is a tough job... Years ago, I first worked in a meat packing plant but hurt my back and was ran off that job.” - Sara Ruiz

A family friend offered up his home for a few months with reduced rental rates until the Ruizes could get back on their feet.

Meanwhile, Sara upped her babysitting services for families in the area and cooked and sold Mexican food on the weekends and evenings. Her efforts brought in about $600 a month.

But the money wasn’t enough to meet the $1,200 needed for rent, utilities, food and transportation, for which the family needs a car to get around the rural areas for work, groceries, and school.

For the first time, the Ruizes were forced to sign up for food stamps.

Despite these challenges, the eldest Gabriel declines to speak ill of his former employer.

“But it was 20 years of my life invested, and then it’s just gone,” Gabriel Sr. said. 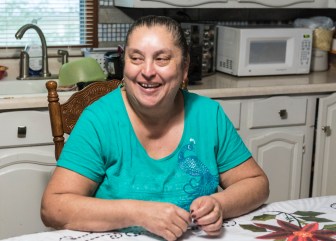 A couple of months ago came a minor reprieve: both Sara and Gabriel Sr. got seasonal jobs working at another orchard. But by the Christmas holidays, they’ll possibly be out of work again.

The Ruizes are at a critically vulnerable spot. Despite health issues, Gabriel and Sara won’t qualify for Social Security or Medicare until 2021. Because migrant work doesn’t usually come with a retirement plan, they have to keep working.

The eldest Gabriel turned 60 in September, which he says will make it harder for him to find work, especially after an injury at work a few years ago that slowed him down. He doesn’t speak English.

“I have three strikes against me,” he said in Spanish. “First: the accident. Second: my age. Third: my language. At least that’s what I think.”

Sara, now 57, worries about their next steps.

In Spanish, Sara explained the family manages “just like this,” calmly smiling and shrugging it off with a dismissive hand gesture.

She didn't cry when describing the family’s struggles, that is, until she spoke about Julio. Sara says she is proud of what her youngest son has accomplished so far, but her eyes filled with tears as she expressed worries that the family’s situation could distract Julio from his studies.

But Julio is more optimistic, consoling his mother with a smile and a hug. Yes, he said, money is tighter than ever, but he’s looking for all the scholarship aid he can get to cover his final years in college. Partial motivation? To not follow in his father’s footsteps of field work, he said.

When Julio was deciding two years ago where to attend college, he kept in mind his father’s health had become more fragile and the stakes would be higher on him to work to help pay for his own college.

A view towards the Missouri River across farm land in Lexington, Missouri, on June 21, 2016.

He opted to attend a local community college instead of his dream school, University of Missouri at Columbia, an hour away.  Financial aid and scholarships would not have covered all the costs, Julio said.

He worried about taking on further debt in case something went wrong financially.

Still, the hour-long commute to and from campus everyday is costly, and the nearby housing in Sedalia is out of financial reach at $8,000 per year.

The Ruizes said that they help Julio cover gas, as they don't want him to drop out. His older siblings pitch in here and there, too, they said.

The younger Gabriel didn’t finish college and instead went to work in a meat processing factory in Marshall, where his career took off, not an unusual trend for the eldest child in first-generation immigrant families working their way up to the next economic class. This is where Julio works in summers for $14 an hour. With minimum wage at $7.65 an hour in Missouri, the pay rate was enticing, especially to a cash-strapped, first-generation college student in need of a new laptop.

Julio and his parents differ at times on how they say they’ve been received in Missouri. Julio said overall that his family has been able to assimilate well, but he says his parents don’t always pick up on prejudices against migrant workers or Mexicans, mainly because they don’t interact with the locals as much as he and his siblings do.

Sara said she hasn’t experienced racism, but the language barrier makes it harder for migrant workers and locals to understand one another.

Julio, however, said he and his siblings, all bilingual, have heard derogatory comments. He was only one of two Latino students, both children of migrant workers, in his graduating class of 26.

Where his parents say they may have felt invisible to the community, Julio said he and his siblings felt at times they stuck out.

Despite these feelings, Julio plans to stay in the area a little longer. His family recently put down a payment on a used mobile home, where he plans to live while finishing college in Missouri. He dreams of a future in California and a career in tech, not too far from his birthplace near the fields in the San Francisco Bay Area.

But he has no desire to return to his parents’ line of work, there or anywhere. He said it was a life of poverty, both in Mexico and here.

Like many others, the Ruiz family left Mexico because the work pays very little.  In America, it’s not much better.

The average annual income of crop worker families is between $15,000 to $17,499 for a family, according to the National Agricultural Workers Survey, or NAWS, a report published by the U.S. Department of Labor.  The Ruizes earned less than $28,410, the poverty level for a family of five, and their kids qualified for free and reduced lunch.

Julio said his siblings spoke about how little money their family had in Mexico where jobs were scarce, educational opportunities were limited and pay was lower there than on farms in U.S.

Seeing them work in the fields,  “that stuck with all of them,” Julio said. “[My parents] came like many Hispanics do here, for the American Dream and for us to have it better than they did. Seeing them, and their work ethic, it inspires you.”