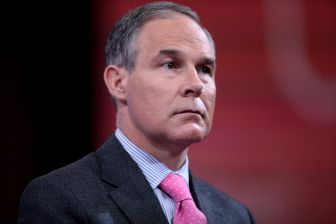 Senate Democrats have raised questions about the nomination of Oklahoma Attorney General Scott Pruitt to head the Environmental Protection Agency. In separate letters to the U.S. Office of Government Ethics and EPA, the nine senators from the Environment and Public Works Committee asked for more information about Pruitt, saying that his ethics and financial disclosure agreements ignored key areas of concern.

Pruitt, who was infamously caught sending letters drafted by the fossil fuel industry to the EPA and other government organizations as attorney general, has strong ties with political contribution campaigns, like the Liberty 2.0 PAC and the Republican Attorneys General Association, but did not list them on his ethics forms. Pruitt also served as chairman of the Rule of Law Defense Fund until last week, but the senators said that he did not give enough information on the activities of this organization.

Each of these organizations has ties to the fossil fuel industry, which is regulated by the EPA. The senators sent a letter Thursday to the OGE asking the office to disclose any information Pruitt gave about the donations given to these organizations, promises he made in return for donations and any gifts, including chartered flights, Pruitt may’ve received from these organization’s activities.

The senators said this previous work could have a role on Pruitt’s conflicts of interest, even if he has no personal financial interest.

“During his tenure as Attorney General of Oklahoma, Mr. Pruitt has blurred the distinction between official and political actions, often at the behest of corporations he will regulate if confirmed to lead EPA. While the disclosures Mr. Pruitt made to OGE may be sufficient to ascertain his personal financial conflicts of interest, they do not document conflicts he may have as a result of political activities,” the letter read.

Additionally, in his role as attorney general of Oklahoma, Pruitt is currently suing the EPA, alleging that it overstepped its bounds with the Clean Power Plan, which requires states to reduce greenhouse gas emissions.

While Pruitt pledged to consult the ethics office for one year before being involved in the lawsuit he filed on behalf of Oklahoma, the senators called it “little more than pro forma” and asked for more information about the types of conflicts that may exist. These questions included the extent of the power of the ethics office, how other types of conflicts of interest would be handled (including litigation involving his co-plaintiffs in lawsuits), why Pruitt’s recusal was only one year, among other questions.