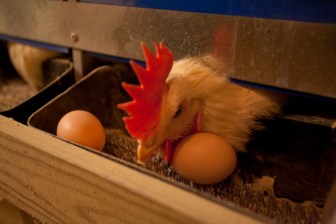 The U.S. Department of Agriculture has, for a second time, delayed the implementation of organic poultry and livestock standards.

The U.S. Department of Agriculture is — for the second time — delaying the implementation of organic rules for the treatment and living conditions of poultry and livestock.

Finalized during the end of the Obama administration, the organic livestock and poultry rule would strengthen standards for animal handling, transportation and slaughter. Among its several provisions, the rule sets minimum indoor and outdoor space requirements for chickens marketed as organic.

The organic livestock rule was originally scheduled to go into effect on March 20, but was pushed back until May 19.

On Tuesday, the USDA announced the rule would again be further delayed until Nov. 14, though it is possible the stricter standards are never implemented at all.

USDA officials said the delay is to give the department more time to consider the changes and allow for additional public comment.

Senate Agriculture Committee Chair Pat Roberts (R-Kansas), who has long been critical of the organic livestock rule, said in a statement that he applauded the delay and hopes the USDA will “carefully consider its unintended consequences.”

“As I’ve heard time and time again from organic livestock and poultry producers — the folks who are most affected by its implementation — this rule is bad news for farmers, ranchers and consumers,” he said.

The National Pork Producers Council and United Egg Producers are among the agricultural interests who have publicly opposed the rule.

In April, more than 300 certified organic beef, pork, dairy and poultry producers representing about $1.95 billion in annual sales voiced their support for the rule in a letter to USDA Secretary Sonny Perdue.

They also called on the secretary to implement the rules without further delay, a request that was obviously not followed.

“Being certified organic is a choice, not a mandate,” said Laura Batcha, CEO and executive director of the Organic Trade Association, in a statement. “Organic means more than just what animals eat. The comprehensive regulation reflects a consensus between producers, certifiers and consumers that organic livestock, including poultry, should be provided with meaningful outdoor access and adequate space to move around, and that all organic livestock should not be subjected to unnecessary physical alterations like tail docking.”

In its announcement delaying the organic livestock rule, the USDA said it had four options to assess: put the rule into action, pause the rule indefinitely, further delay or rescind the rule all together.