Experts warn that projected decreases in corn and soybean yields in the coming decades because of climate change could continue the rise in irrigation and drive up prices for farmland above aquifers.

Climate experts predict that over the next few decades, Illinois is going to become hotter and have longer dry periods.

"As carbon increases in the atmosphere, there will be higher rates of evapotranspiration and to maintain yields, more and more irrigation will be required," said Stephen Long, a crop sciences professor at the University of Illinois. "This will put more pressure on water resources."

Even if the same amount of precipitation comes, rain events will likely be fewer and further between, meaning the storms that do come will be more intense, according to climate projections. Under high emission scenarios, the Illinois climate is projected even to be similar to North Texas by the end of the century.

That could have disastrous effects on agriculture, as studies have found that both corn and soybeans yields will likely decrease in the Midwest in coming decades, as temperatures rise and precipitation becomes less frequent.

In a study published last fall, University of Illinois crop sciences professor Andrew Leakey contradicted the widely held belief that increased carbon dioxide in the atmosphere will boost the yields of soybeans. 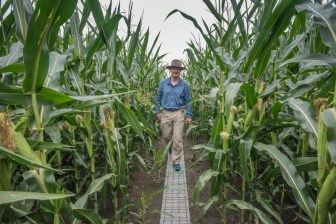 University of Illinois Crop Sciences Professor Andrew Leakey walks through a corn field on July 29, 2016, at the SoyFACE facility in Savoy, Ill.

Leakey found that in ideal growing conditions, carbon dioxide boosts crops’ yield, but in years of drought, the damage offsets those benefits.

An increase in carbon in the atmosphere could cause plants to grow larger, increasing their demand for water and making decreased yields and crop failure more likely when rain doesn’t come.

That could potentially be offset by irrigation, but that’s not an option in some places, like areas that aren’t above aquifers and Champaign County, where irrigation is approaching its maximum.

“Certainly, (an increase in irrigation is) is what one potential implication would be if you’re willing to pay the environmental and ecological costs,” Leakey said.

However, Leakey said the market would have to drive irrigation.

Champaign County farmer Mark Pflugmacher said that climate change wasn’t a consideration when he decided to install his irrigation system.

Lauren Lurkins, director of natural and environmental resources at the Illinois Farm Bureau, said she hasn’t heard very much concern statewide about climate change from farmers considering irrigation, either.

“Is it increasing because of climate change? I see it more in response to their bottom line,” Lurkins said. “If they could take measures to improve their operation, it would make more sense to do that when times are good, and farmers made a lot of money the last few years.”

But George Roadcap, a groundwater hydrologist at the Illinois State Water Survey, said when commodity prices were high a few years ago, farmers who were looking at investing in land were also interested in whether the land was over the aquifer.

“If I was a farmer looking to invest in ground, one of the considerations I would look is whether it is over the aquifer or not,” Roadcap said. “In the future, the farm ground that has water you can irrigate with might be a lot more valuable than the ones that don’t.”

He said it’s a long-term look at the issue, but even with more efficient hybrids, irrigation might pay off because of climate change.

“If I was going to invest in farm ground, if some of these climate scenarios come true, then having irrigation might be something that would pay off in the long-term,” Roadcap said.