Below is part one of a four-part series as presented on Rosenstein's website. It was also featured in the Huffington Post, the Champaign News Gazette, Illinois Public Media and the Chicago Tribune.

“It’s not tax money, so angry taxpayers can calm down.” That was the first reader comment posted on an on-line Chicago Tribune story.

The issue that elicited that reaction was the six-year, $18 million contract for newly hired University of Illinois, Urbana head men’s basketball coach Brad Underwood. It’s part of a familiar ritual that happens whenever the UI hires a new high-profile coach:

– “Intercollegiate Athletics is self supported and does not use state funds, taxpayer dollars, or university funds for our salary program,” said Kent Brown, athletic department spokesperson.

It’s a narrative that’s been repeated for years, over and over, from pretty much every corner.

Except it’s not true.

Watchdog Watch: A curated collection of investigative or enterprise stories from media partners and other independent, nonprofit newsrooms across the country. Read more here

And benefits for UI employees – health, dental, etc. – are paid for by the state of Illinois. In other words, the taxpayers.

The cost isn’t exactly trivial. In 2016-17, the taxpayers’ bill for athletic department benefits was just under $6 million, according to the UI’s Associate Chancellor for Public Affairs. And the cost of those benefits is an annual expense. Combined with the $2.6 million pension cost for retired coaches and other retired athletic department employees (as explained in Part Two of this series), the total cost to Illinois taxpayers for UI athletic department compensation packages was $8.6 million in 2016.

Yet according to U of I Trustee Tim Koritz, “coaching contracts are covered by athletic department income, not tuition or state funds.”

Maybe in Trumpworld of alternative facts.

“What I think it does is it undercuts the argument that tax dollars have nothing to do with athletics,” said State Senator Scott Bennett. “They certainly do.“

Even if taxpayer money isn’t going directly to pay these incredibly generous salaries, it still plays a role. By picking up the cost of employee benefits for the UI athletic department, taxpayers help to free up money for the athletic department, money it can then use to pay for other things – such as the salaries of its coaches. Those huge salaries — football coach Lovie Smith and men’s basketball coach Brad Underwood are the highest paid public employees in the state — ought to look very different to the public when it knows that part of the justification for those salaries, that “the state of Illinois does not fund coaches’ salaries” is basically a lie. 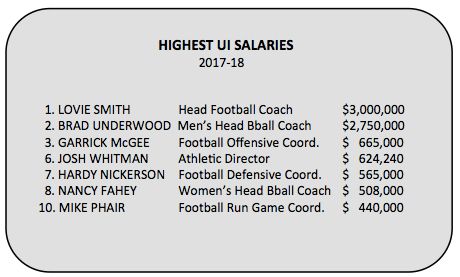 All data from U of I Academic Personnel Book “There’s so many people in an athletic department (today), it’s incredible. I mean, literally incredible,” said Rick Telander, a sports journalist who has been covering college sports for more than forty years. “There are no limits. There’s no cap.”

Like many of its peers, the UI athletic department has grown dramatically. The total number of athletic department staff, according to the university’s academic personnel books, has risen from eighty-eight in 1997, to one hundred and ninety-six in 2017. That’s a whopping one hundred and twenty three percent increase (+123%) in athletic staff. (Compare that with the number of tenured faculty, which is basically unchanged over that same twenty years, while the total number of students has increased by 25%). 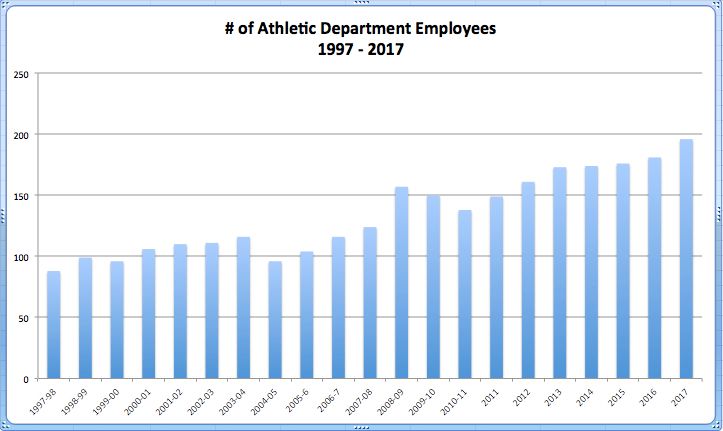 Data from the University of Illinois Academic Personnel “Gray” Books

More staff costs taxpayers more money. New hires add to the total benefit costs that Illinois taxpayers have to pay. As long as TV revenue for broadcast rights continues to grow as it has, the number of athletic department employees is likely to grow with it. It’s strangely ironic that the more TV money the UI athletic department gets, the more it could actually end up costing the taxpayers.

Of course, the athletic department doesn’t have to hire more staff. The number of sports offered by the UI hasn’t changed for decades.  But no one seems to be willing to ask the simple question: why does athletics really need to keep hiring more people? Maybe it’s because we already know the answer: because everyone else is doing it.

And unfortunately the even more important follow-up question is never asked either: since athletics keeps getting more and more revenue, why can’t it pay the benefits for its own employees instead of the taxpayers?

That answer is easy too. Because we allow it to happen, that’s why.

And why do we allow it to happen?  Perhaps because we believe these statements:

–“Coaching contracts are covered by athletic department income, not tuition or state funds.”

–“The state of Illinois does not fund coaches’ salaries.”

–“Intercollegiate Athletics is self supported and does not use state funds, taxpayer dollars, or university funds for our salary program.”

Alternative facts.  And round and round it goes.