But engineering experts say there may be a greater risk posed by the collapse of the riverbank holding back more than 600 million of gallons of toxic coal ash.

A 2017 engineering study paid for by Dynegy Corp., the previous owner of the site, shows that the river is rapidly undermining the riverbanks near the ash ponds. The company has made a least two attempts to harden the riverbank against further erosion, but the banks remain unstable.

The study was obtained through an Freedom of Information Act request by the Eco-Justice Collaborative, a non-profit environmental group in Champaign, that has shared it with news outlets.

Since the report, the riverbank has continued to erode, according to environmentalists, community leaders and Dynegy itself.

“Two years ago that was the site of some pretty rapid erosion followed by a sort of emergency response application from Dynegy to say hey we need to armor this,” said Andrew Rehn of the Prairie Rivers Network. Armor is a term for stabilizing the riverbank.

“So they got approval to armor the riverbank and what you see there now is just under 500 feet of white stone,” Rehn said.

“The existence of the ash pond within the meander pattern of the River is a considerable threat to the River,” wrote Park Service’s Midwest Regional Director Cameron Sholly. “In the absence of the immediate removal of the fly ash ponds, the re-establishment of the bank and associated armoring is necessary as a temporary practice for the protection of the River and its values, until such a time the ponds are removed.”

After the riverbank under the New East Ash Pond was stabilized in 2016, erosion along other sections of the Middle Fork increased.

“We went out on May 2nd and we were astounded,” said Pam Richart, co-director of the Champaign-based Eco-Justice Collaborative. “You can see the way the banks had moved closer, specifically on the Old East pit.” 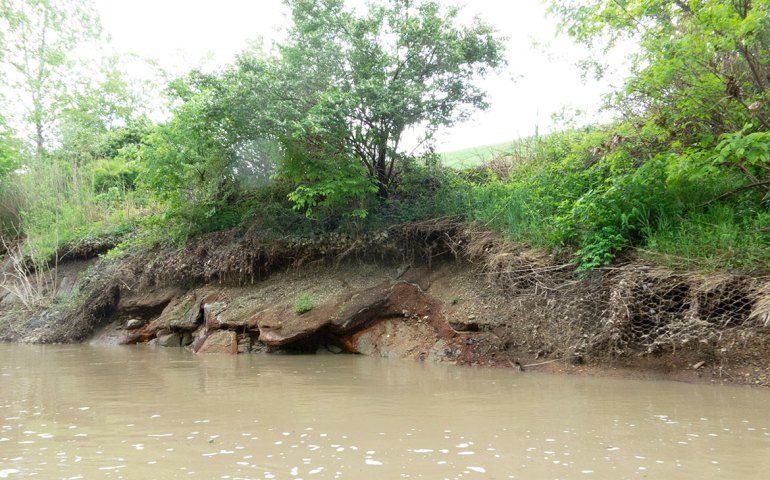 The Middle Fork River has been undermining the riverbank under the Old East Ash Pond, which sits within the river's floodplain.

The Vermilion Power Station began burning coal in 1955, when few water pollution laws were in place.

“They just flushed the ashes down into the floodplain and built a little dam to hold back the slurry,” said Clark Bullard, a professor of mechanical engineering at the University of Illinois and long-time environmental activist.

“It was a convenient place at the time to dispose of the coal ash,” said Rob Kanter, a Prairie Rivers board member and Clinical Associate Professor at the School of Earth, Society and Environment at the University of Illinois. “Obviously you know in hindsight it's seems ridiculous that anybody would put the waste material with that kind of toxic substances in the floodplain of an actively meandering river.”

The Illinois Environmental Protection Agency is expecting Vistra/Dynegy to submit in October a proposal for closing its three ash ponds at the Vermilion Power Station. The proposal will likely include options for capping the ponds in place, and for excavating the coal ash and removing the ponds from the banks of the Middle Fork.

A report by Stantec Engineering, paid for by Dynegy, revealed that given the rate of erosion near the ash ponds, additional riverbank stabilization is required no matter which closure option is approved by the Illinois EPA.

But many of the structures previously put in place to stop riverbank erosion have been overwhelmed by the force of the river. 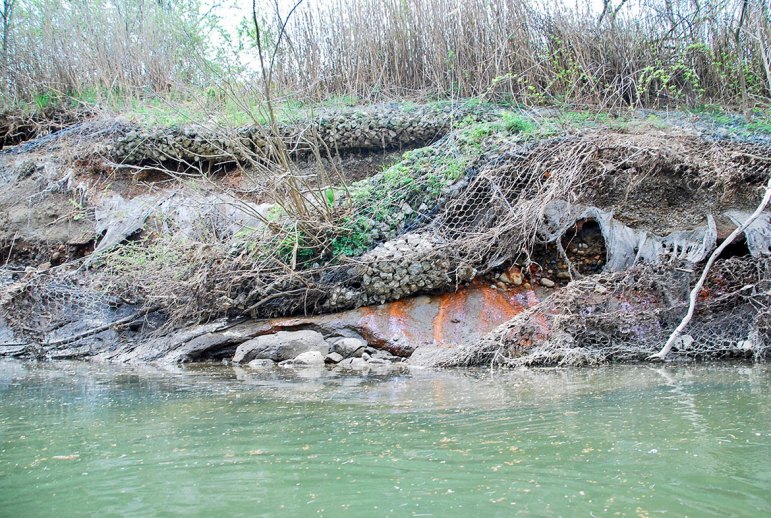 Photo courtesy of the Eco-Justice Collaborative

Structures meant to stop erosion of the riverbank under the coal ash ponds were damaged by the force of the river during a flood event in early 2018.

“They built what are called gabions,” said Clark Bullard.

Describing a gabion, Bullard said, “Imagine ordinary chain link fencing material made into baskets of rocks that are 5 foot cubes arranged in stair step manner to protect the bank from erosion.”

The river broke open many of the gabions and washed them downstream. More erosion was found in 2016 on the riverbank underlying the New East Ash Pond. 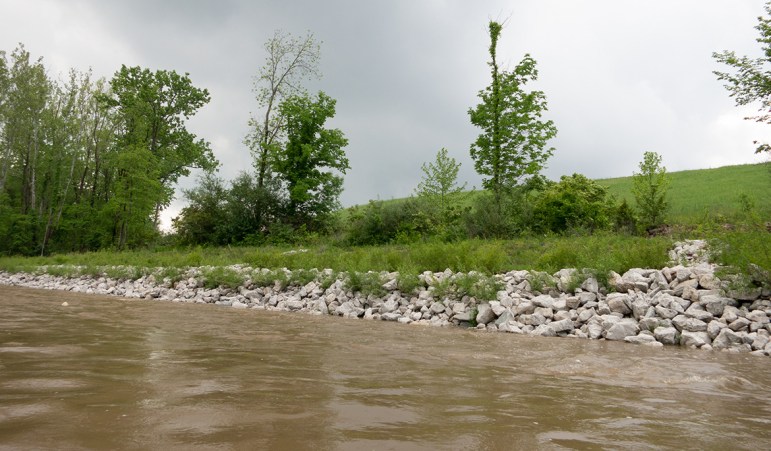 In 2016 Dynegy installed white boulders – a structure called "stone toe protection" – along a 500 foot section of the Middle Fork riverbank to prevent further erosion under the New East Ash Pond.

On June 28 Dynegy filed a permit application to install an additional 1900 feet of armoring on the riverbank under the North and Old East ash ponds.

Dynegy’s plan calls for digging seven feet below the existing river channel bed, and filling it with “void-filled riprap” – a mix of stones designed to stabilize the stream bed – along a one-third mile stretch of the river under the coal ash ponds. Large boulders would be placed on top of the riprap. The upper bank would be filled with native materials and seeded with layers of live brush.

The company wants to install a combination of “stone toe protection, embedded toe boulders, void-filled riprap, and live branch layering” to stop the Middle Fork from further eroding the banks.

“That’s a real eyesore,” said local resident Kristin Camp, who has lived near the Middle Fork for six decades. “All the white limestone rock, and the fact that they want to do that four times as long…I mean that’s not acceptable at all.”

Schematic drawings of Dynegy's proposed stabilization structures were obtained by the Eco-Justice Collaborative through a Freedom of Information Act request. 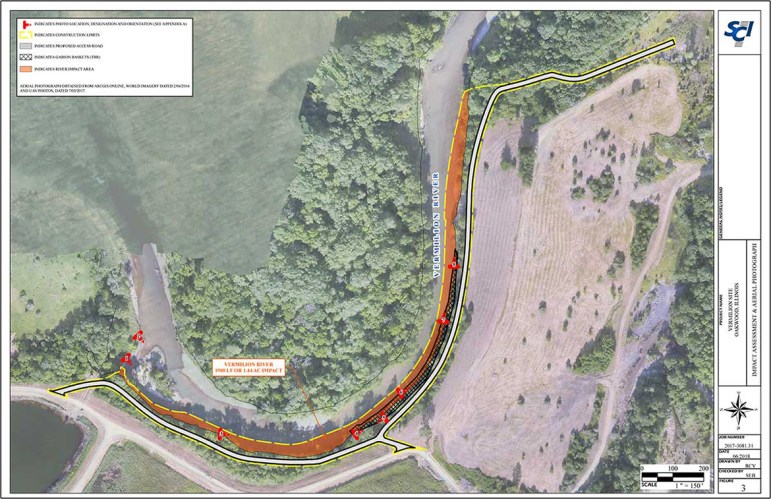 Diagram from a report by SCI Engineering

A diagram from Dynegy's engineering contractor, SCI Engineering, shows a plan to install stone toe protection along one-third of a mile of the Middle Fork River. The structure would have a significant impact on Illinois only National Scenic River.

“We're talking another 1700 to 2000 lineal feet of stabilization that has to be done,” said Pam Richart. “And how is a half mile of white rock along a National Scenic River with the mounds of the coal ash pits rising in the background going to be considered consistent with the Wild and Scenic Rivers Act?” 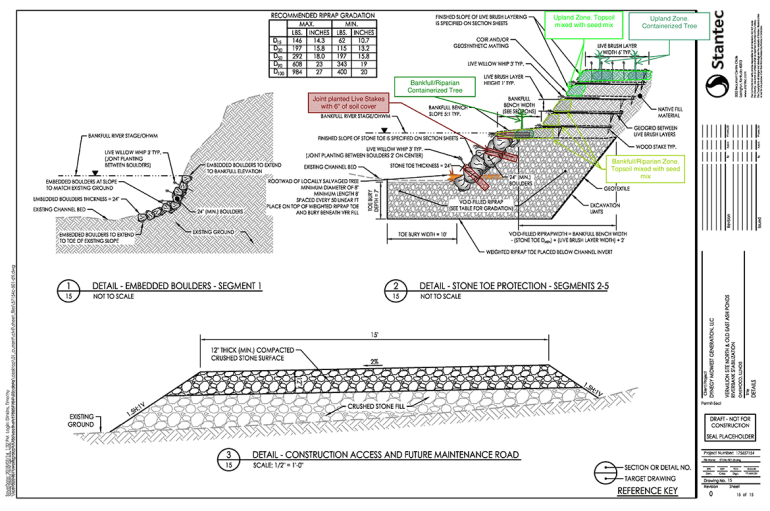 Dynegy's riverbank stabilization proposal includes digging seven feet deep into the riverbed to install “void-filled riprap” – a mix of stones designed to stabilize the stream bed – along a one-third mile stretch of the river under the coal ash ponds. Stone toe protection boulders would be placed on top of the riprap.

Impact on a National Scenic River

The federal Wild and Scenic Rivers Act, signed into law in 1968, prohibits “any water resources project that would have a direct and adverse effect on the values for which such river was established,” including the “outstandingly remarkable scenic, recreational, geologic, fish and wildlife, historic, cultural, or other similar values.”

The National Park Service is responsible for administering the Wild and Scenic Rivers Act, and has jurisdiction over projects impacting National Scenic Rivers like the Middle Fork. The NPS approved Dynegy’s 2016 application to armor the riverbank under the New East Ash Pond.

But Cameron Sholly said the National Park Service had strong concerns about the existence of the ash impoundments so close to the river.

“The proposed project is necessary, in the absence of pond/ash removal and reclamation of the area, to protect the River and its values and to reduce the potential of embankment failure and possible discharge of the contents of the primary pond into the River,” he wrote. “The NPS recommends that the proponents consider the mutual benefits of pond relocation for facility management and the River’s values.”

Because the Middle Fork is a National Scenic River, any proposal to alter its “free-flowing condition” must also be approved by the Illinois Department of Natural Resources. The U.S. Army Corp of Engineers must approve a permit for construction of bank fortifications. 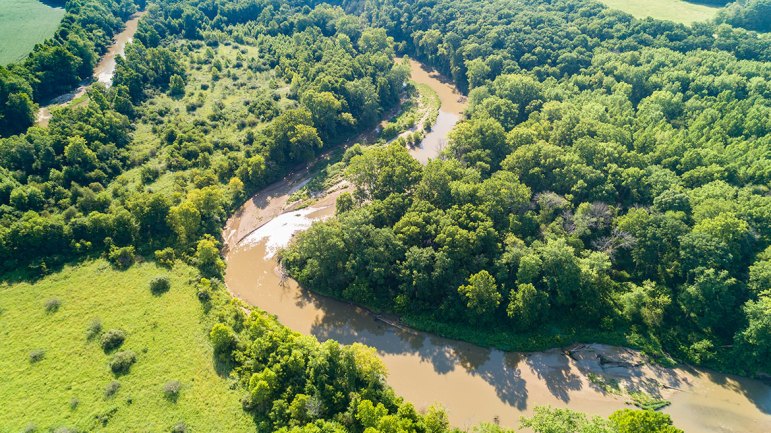 The National Wild and Scenic Rivers System was created by Congress in 1968 to preserve certain rivers with outstanding natural, cultural, and recreational values in a free-flowing condition for the enjoyment of present and future generations. The Middle Fork is Illinois' only National Scenic River.

Dynegy’s plan to permanently close the Vermilion coal ash ponds, due in October, must also be approved by multiple state and federal agencies.

Dynegy had asked for fast-track approval of the closure plan. The company claimed in a letter to the Illinois EPA “there are no regulatory requirements to provide our ash pond closure plans to the IDNR, the NPS or the USACE for approval.”

Sanjay Sofat, Chief of the Illinois EPA Bureau of Water, explained the approval process would include four groups within his division, and all other agencies with jurisdiction over the site and the river.

“Definitely we're going to make sure that DNR, Corps, and NPS, they all have given their approvals and then we will give our approval,” Sofat said. “So there will be some individual determinations going on as well as coordination among the agencies to make sure that whatever closure option is selected is consistent with everybody's requirements.”

Riverbank stabilization will likely be required even if Dynegy proposes to remove the ash ponds, since excavation would take several years.

“It's a tragedy that something has to be done like this,” Andrew Rehn said. “Nobody wants to see the embankment fail.”

But Clark Bullard says stabilizing the riverbank won’t stop coal ash contaminants in groundwater from leaching into the river. “So you have to go back to the root cause – putting band aids on an arterial bleed doesn't really help,” he said. “It's a temporary way to make it look like you're solving a problem.”