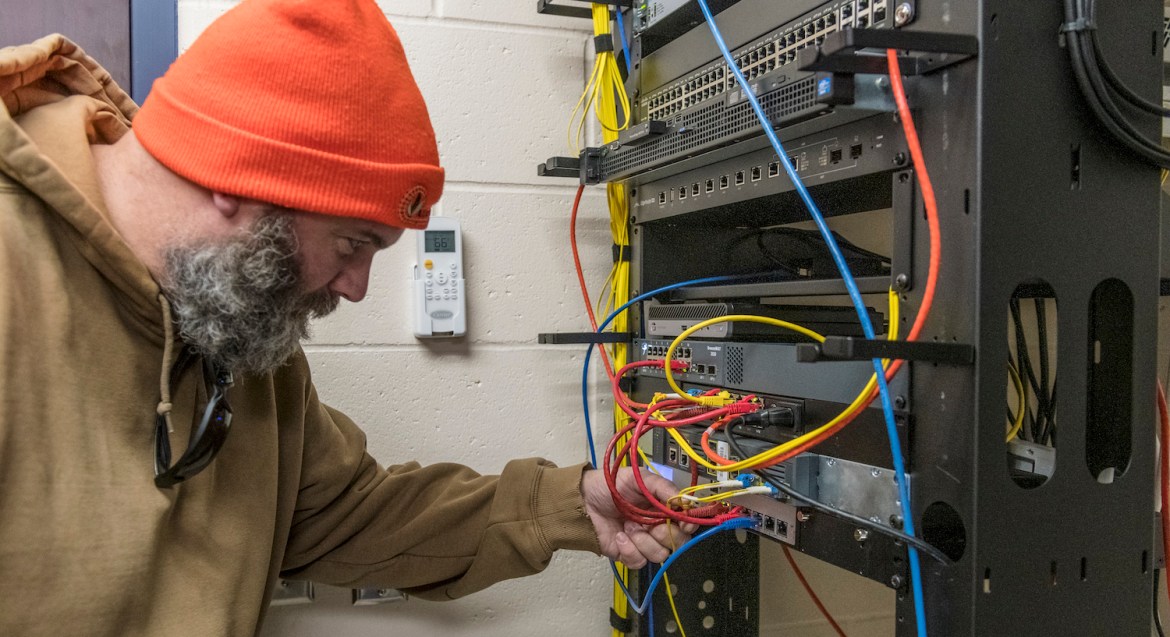 Tristan Johnson, owner of Wireless Data Net, shows where his system links into the fiber at Blue Ridge High School in Farmer City, Illinois, on Tuesday, November 13, 2018. Wireless Data Net is based out of Saybrook, Illinois, and serves just under 1,000 customers throughout 20 smaller rural towns in central Illinois. The company puts its towers on grain elevators and water towers to reach internet customers through its wireless network.

These are just some of the concerns contained in nearly 300 public comments on Rural Broadband Pilot Program proposed by the U.S. Department of Agriculture, a review by the Midwest Center for Investigative Reporting found.

The proposal follows a promise to farmers by President Donald Trump in January 2017 to deliver a faster, more reliable internet to rural areas.

The President followed the promise with an executive order to spur a broadband expansion in regions of the U.S. where connectivity is spotty at best.

But little has been done since. The public comments that began in July contain at least 3,600 references to criticism of the standards, including that speeds would would not be fast enough and that it focused on speed and not bandwidth.

“(Rural Utilities Service) should consider input from communities, consumers, large and small businesses, and local leaders on the level of service or broadband speed they deem as sufficient for their community and their satisfaction with existing service,” said Bryon. “25/3 Mbps should be the absolute minimum build speed, but we feel that it should be 50/10 Mbps as a standard for broadband speeds.”

In 2015, the Federal Communications Commission set the standard definition of “broadband” at 25mbps/3mbps.

The President’s announcement was welcome news to rural Americans who often pay high fees for sluggish internet connections via cellular, satellite or wireless services. Rural Americans can pay as much as $155/month for service slower than the Federal Communications Commission classifies as “high speed internet.”

But after the president’s executive orders, there was little action on the issue. The program, which had a $600 million budget in 2018, was promised another $425 million in the 2019 Agriculture, Rural Development, Food and Drug Administration, and Related Agencies Appropriations bill.

The public comment period opened in July and closed September 10.

Secretary of Agriculture Sonny Perdue, speaking at a USTelecom Broadband Investment Forum on October 18, said the USDA’s Rural Utilities Service is still determining how internet providers will get funding for the program in which parts of rural America.

“We are moving as expeditiously as possible,” he said. “I’ve challenged our people to have a good, solid plan in place by the end of the year.”

Yet funding for the service is still unclear.

On June 4, Mick Mulvaney, the director of the Office of Management and Budget, sent a letter to the chairman of the Senate Committee on Appropriations, calling into question several items in that bill. In that letter, Mulvaney pushed back against the request for more money for the Rural Broadband Pilot Program, pointing out that the agency hadn’t yet used the money allocated in 2018.

“This funding is premature, as the Consolidated Appropriations Act, 2018 recently provided $600 million for a "pilot" grant/loan program, which USDA is still working to implement,” said Mulvaney in the letter.

The Midwest Center for Investigative Reporting compiled all the comments submitted during the public comment period and analyzed them for common themes in the text of the remarks.

While nearly all the comments were in favor of the Rural Utilities Service’s efforts to expand broad internet, there were 3,659 references to the idea that the pilot program’s standards for speed were either not fast enough, they were focused on speed but not bandwidth, or the speed at which technology is advancing would leave those speeds obsolete in just a few years.

MAP: Comments on the USDA’s Rural Utilities Service Rural Broadband Pilot Program. Click on the icons to see who submitted the comments and find a link to the full comment.

Who should qualify for the pilot program, and where

The pilot program tries to define what parts of the country should be eligible for expanded rural broadband coverage.

But 2,114 references mentioned words relating to who should receive coverage, words such as “unserved,” “underserved,” “density” and “eligibility.”

Many spoke of living on the edge of coverage, with high speed internet available just down the road from them, but not where they lived.

Sarah Sorrell of Fredericksburg, Virginia commented that, although she lives within five miles of a high school, she doesn’t have reliable internet access, which she needs as a college student.

“No cable company wants to run cable out to us,” she said. “the map says that we have cable wireline coverage, and it also says that down the road there is fiber optic coverage. This information is false.”

The Rural Utilities Service’s map of current coverage is built using data from internet services providers. The providers are to “comment if 10 Mbps downstream and 1 Mbps upstream service exists for households in the proposed service area or not,” according to the request for comment.

The just over 1,100 references to the accuracy of these maps indicates that commenters don’t have a lot of faith in the speeds the internet service providers claim they’re able to offer.

Christopher Varenhorst of Eclipse Communications, a wireless internet service provider based in Benzonia, Michigan, explained in his comment that mapping internet coverage has long been a struggle, across government agencies.

“The National Telecommunications and Information Administration (NTIA) recently requested feedback regarding improving the accuracy of broadband availability maps,” said Varenhorst. “This is a realization that the viability of current datasets and maps are at this time, compromised.”

Cost is top-of-mind for many commenters. More than 1,800 references were made to current costs, fears that adequate speeds will come with big price tags and hopes that decent internet could help rural communities that are fighting poverty find prosperity and new opportunities for growth.

Mary Stough, from Spencer, Indiana, said in her comment that when she moved to rural Indiana, she found the only internet connection available to be via mobile hotspot.

“The speed is not fast and it's prohibitively expensive but it's something,” said Stough.

For others, paying expensive rates is not feasible. Debra Hansen, commenting on behalf of Stevens County, Washington, said that an affordable option has to be available.

“Especially where there are higher levels of poverty, lower levels of education attainment, limited jobs, etc., having at least one provider that offers discounted service is critical,” said Hansen.

Sean Markis of Tempe, Arizona lays out a scenario in his comment that highlights the need for keeping costs down.

“If I as a WISP (Wireless Internet Service Provider) say that I can get you 25/3 speeds to your house and get thousands of grant dollars to build up my infrastructure to support those speeds. Then charge you the customer ridiculous amounts of money that make it unaffordable for that speed,” said Markis. “Does paying hundreds, thousands of dollars a month for FCC required 25/3 speed make much sense when customers can’t afford it? How exactly did we solve anything?”