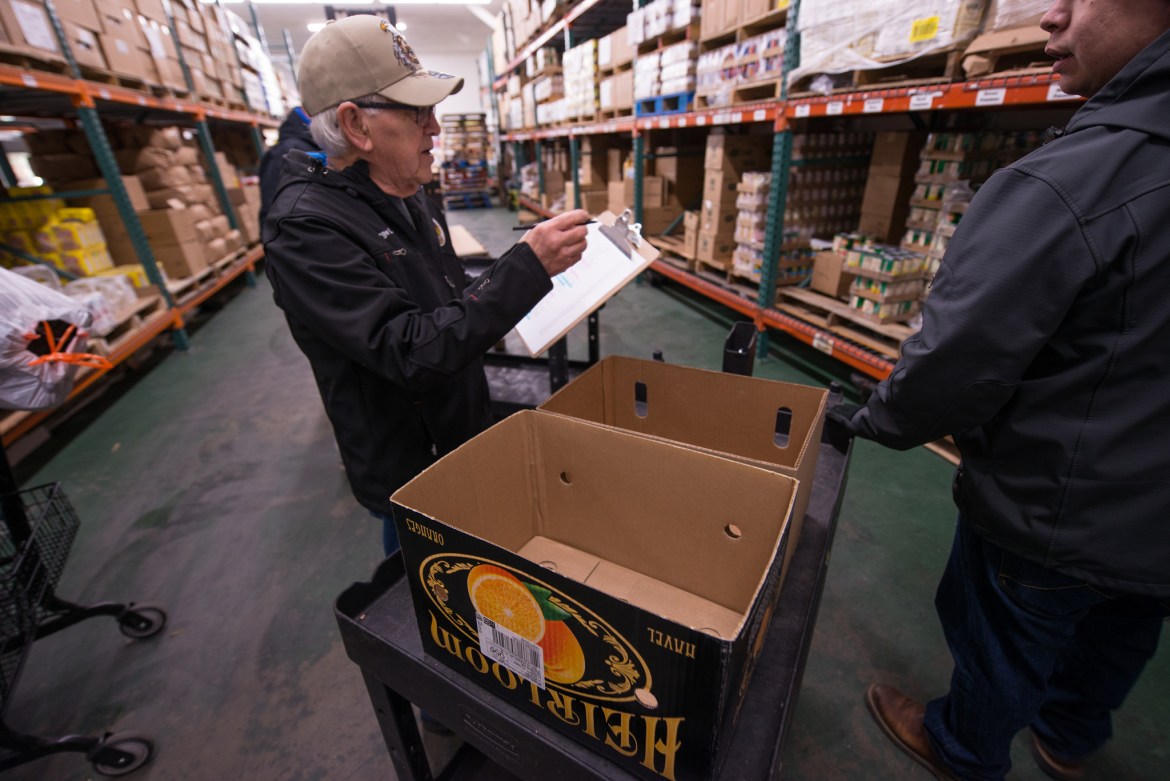 Photo by Don Hamilton for USDA

Lummi Nation Food Distribution Program on Indian Reservations (FDPIR) staff work in the warehouse on the Lummi reservation in Washington on January 10, 2017. Indian Tribal Organizations administering FDPIR order a variety of USDA Foods to distribute to their clients each month.

Six months after the U.S. Department of Agriculture promised to buy $1.2 billion worth of food from American pork, beef, and produce farmers, many producers are still waiting for signs of relief.

Since Secretary of Agriculture Sonny Perdue announced the program on August 27, the agency has ordered just 11 percent of the food it promised to buy from U.S. farmers, an analysis by the Midwest Center for Investigative Reporting found.

The pork industry has been hit particularly hard by President Donald Trump’s nearly year-long trade wars with China, Mexico and Canada. While negotiations with North American neighbors have settled, the disrupted trade with China continues to hurt hog farmers across the country.

“U.S. pork is on three trade retaliation lists (two in China; one in Mexico) that cover approximately 40 percent of total exports,” the National Pork Producers Council stated last year. “In China, we face tariffs of more than 70 percent, rendering us non-competitive against domestic producers and other exporters.”

The USDA, in an effort to offset lost foreign markets for pork and other U.S. food, has bought 65 million pounds of U.S. produced meat and rice and 2.1 million cases of fruit, vegetables and nuts between the end of October and early February. Pork products, such as pork chops, ham and canned pork made up 38.5 million pounds of the USDA’s purchases.

Still, at $137.5 million - the purchases only amount to 11 percent of the food the agency has promised to buy from U.S. farmers, an analysis by the Midwest Center for Investigative Reporting found.

The $1.2 billion commodity purchase program is one of three pieces of the trade mitigation plan announced by Secretary of Agriculture Sonny Perdue on August 27, 2018. The prolonged trade war with China has already cost American farmers hundreds of millions of dollars in lost trade.

The majority of the food purchased through the USDA’s trade mitigation plan is destined for food banks and pantries, through the Emergency Food Assistance Program. ome food may also be made available to The National School Lunch Program, the Commodity Supplemental Food Program, which primarily delivers food to elderly Americans and the Food Distribution Program on Indian Reservations, according to the USDA.

But companies are not as eager to sell their products to these programs.

An analysis by the Midwest Center for Investigative Reporting of the $137.5 million worth of food bids awarded as of February 5 found that 17 percent of food orders remain unfilled.

According to the USDA, producers are awarded contracts based on lowest price and the producer’s ability to fulfill the order.

The USDA said it’ll continue requesting bids throughout the year.

“USDA plans to purchase everything it has announced,” said a USDA spokesman via email.

Ted Schroeder, an agriculture economist at Kansas State University, said companies would rather sell their products to grocery stores and restaurants.

“The government opportunity, it’s going to be a little more costly to dive into,” he said. “My guess is, that would be a last resort to dump product I wasn’t otherwise moving.”

While these unawarded bids represent a small percent of all the food the USDA says it plans to purchase, this program was intended as a temporary relief for farmers who have been shouldering the financial burden of the president’s trade disputes since April, 2018.

“It’s important to note all of this could go away tomorrow, if China and the other nations simply correct their behavior,” said Perdue in a press release nearly six months ago announcing the purchase program. “But in the meantime, the programs we are announcing today buys time for the President to strike long-lasting trade deals to benefit our entire economy.”

Schroeder said that even if the Trump administration works out a deal with China tomorrow and tariffs are lifted, the damage to commodity markets will have a lasting impact.

He pointed to the “mad cow” scare in 2003, which saw foreign markets close off to U.S. beef amid concerns about mad cow disease. China imposed a 14-year ban on American beef.

“Just that one event disrupted, closed markets. It took us 10 years, and we’re still not fully rebuilt in some of these countries,” he said. “Once a country establishes a trade relationship with another country, it’s hard to win them back.”