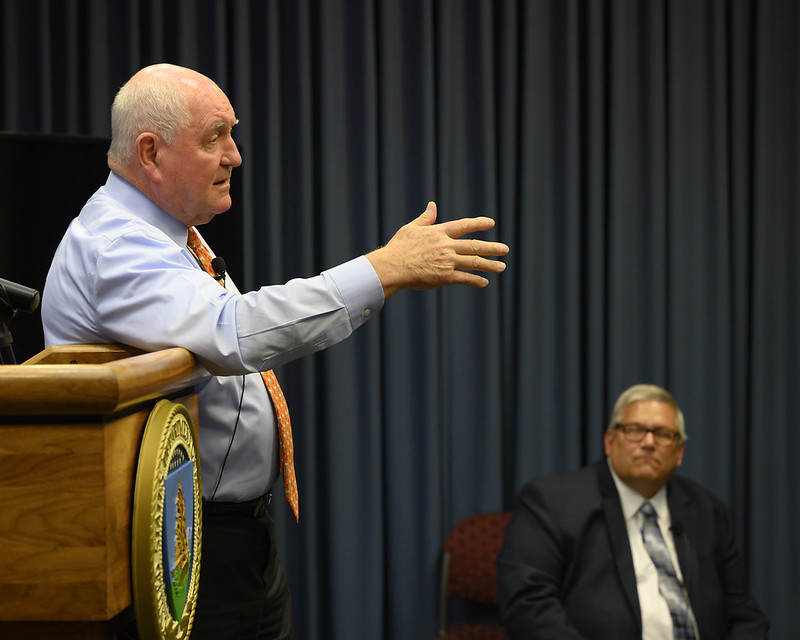 Sky Chadde is the Midwest Center’s Gannett Agricultural Data Fellow. He can be reached at sky.chadde@investigatemidwest.org

This story is embargoed for republication until Feb 22, 2020.

The Trump administration’s decision to relocate two US Department of Agriculture agencies delayed millions in grant funding. One stalled project was a suicide prevention network for farmers.

Last year, the USDA announced the Economic Research Service and the National Institute of Food and Agriculture or NIFA, which funds the network, would relocate to Kansas City. In October, the Washington Post reported the relocation resulted in NIFA no longer having any employees who approved grants and released money. Millions in funding was on hold, according to the paper.

Suicide is a major problem among farmers. A recent Centers for Disease Control and Prevention study found the agricultural industry had the fourth-highest rate of suicide. And a 2019 study found rural areas had seen the greatest increase in suicides since 1999.

In an attempt to address that problem, in October NIFA announced funding for the Farm and Ranch Stress Assistance Network. It’s meant to provide resources to farmers who are experiencing stress, some to the point of contemplating suicide.

The grant recipients believed they would get the funding soon after the announcement, but some of the funding was just recently released, according to the recipients. The recipients said the reason they were given for the delay was the agency’s relocation.

In a statement, the USDA said NIFA was working to release all the funding.

“For a number of reasons, in this case largely because the Farm and Ranch Stress Assistance Network is a new program, the release of funds this year will be, on average, an additional two months later than previous years,” according to the statement.

Asked to enumerate those reasons, the USDA reiterated that the program was new.

Asked if the department was concerned the delayed funding might mean at-risk farmers don’t get the help they need, the USDA said: “USDA is committed to America’s farmers, ranchers and producers and will continue to work diligently to make resources available through the Farm and Ranch Stress Assistance Network.”

The network was created in the 2008 Farm Bill, but a pilot program, with $1.92 million, was not funded until the 2018 version. In its request for applications, NIFA said the network aims to fund “programs to address farmer stress and suicide.”

The four grant recipients and their partner organizations had made plans with the money, including hiring more people to deal with stressed-out farmers, but those were put on hold.

In an interview last week, before her organization could draw down funds, Arnold expressed frustration at the delay.

“The delay has been hard,” said Caitlin Arnold, the national chapter manager of the National Young Farmers Coalition based in New York. “We were supposed to start this in October.”

Don McMoran, the director of the Skagit County Extension office at Washington State University, said the funding had not yet been distributed to the university.

“It’s kind of disheartening,” McMoran said about the delay. “You can definitely see the stress on farmers’ faces. It’s been a tough few years.”

The funding was supposed to help create an online clearinghouse of resources for farmers in eight Midwestern states, Brown said. He had also planned to hire more staff at the Iowa Concern hotline, which helps farmers with financial struggles.

Brown had scheduled the first of eight classes for members of the agricultural community on mental health first aid, which teaches trainees how to help someone in a crisis, for March. The classes were intended to be free, but that may have to be reevaluated if the grant money isn’t released by then, Brown said.

“We are anxiously waiting to get funding,” he said.

Brent Elrod, the network’s national program leader, said the project leaders had expressed concern about the delayed funding to him. Because of that, he said, the initiatives have been given extra time to spend the funds.

In December, $10 million was approved for an expansion of the stress assistance network. Elrod said programs would probably be able to start applying for funds by late March, and the money would be awarded and ready to use by late 2020.

It’s still unclear if the USDA had the authority to relocate the two agencies. Congress needed to approve the relocation, but USDA acted without receiving it, according to a USDA Office of Inspector General report from August 2019.

The Washington Post reported that about 220 NIFA staffers were eligible to relocate to Kansas City but only about 70 moved. According to the USDA statement, the office now has 77 employees in Kansas City and 18 in D.C.