PLAINFIELD — Long Lake has lost its shoreline. Dock after dock dead-ends in the weeds. This small lake in the Central Sands of Wisconsin looks more like an unmowed lawn with a pond in the middle than a place where families used to water ski and fish. The lake used to be up to 12 feet deep. Now it is closer to 3 feet.

“Long Lake was once a trophy bass lake. So when we moved here, in the first two years, my boys were catching bass like crazy,” said Brian Wolf, who owns a cabin on Long Lake. “It was like catching fish in a barrel as the water declined.”

In 2006, the lake dried up completely and all the fish, including 3-foot-long northern pikes, died in the mud. Homeowners like Wolf lost their lake and more than half their property values.

Across central Wisconsin, in a region known as the Central Sands, residents have watched water levels in lakes and small streams drop for years.

Twenty miles north of Long Lake, a six-mile-long coldwater trout stream, the Little Plover River, just landed on a list of America’s 10 most endangered rivers because of its declining flow.

In a state with about 15,000 lakes and more than a quadrillion gallons of groundwater, it is hard to believe that water could ever be in short supply. Experts say, however, that the burgeoning number of so-called high-capacity wells is drawing down some ground and surface water, including the Little Plover River and Long Lake.

In the early 1950s, there were fewer than 100 high-capacity wells in the Central Sands, according to the state Department of Natural Resources. Today there are more than 3,000  —  40 percent of the state’s total — in the six-county area.

Officials at DNR say that legally, they cannot block new wells based on the impacts from existing wells. And lawmakers want to keep it that way.

In June, as part of the new two-year budget, the Legislature took away citizens’ ability to challenge well permits issued by the DNR even when evidence suggests the new well would contribute, along with other neighboring wells, to drawing down nearby surface waters. 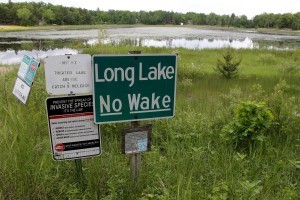 The boat launch at Long Lake, near Plainfield, no longer reaches the water. In Wisconsin's Central Sands, some lakes and streams have lowered or dried up in recent years as the number of high-capacity wells has mushroomed, largely for irrigation.

The law, which will go into effect on July 1, 2014, was sponsored by state Rep. Daniel LeMahieu, R-Cascade. He passed along requests for comment to the office of Assembly Speaker Robin Vos, R-Rochester, which stated that the budget amendment does not change existing standards but “protects the DNR by taking the judicial branch out of the permitting process.”

Water advocates saw the measure as a sign the Legislature does not want to acknowledge a serious problem.

“Any fifth-grader can tell you that if you put too many straws in the water it’ll be gone,” said Bob Clarke, a board member of the nonprofit stewardship group, Friends of the Central Sands. “For our legislators to ignore that is just wrong.”

Experts say the implications of overpumping are on display across the state.

In the Madison area, the deep aquifer is down almost 60 feet. Waukesha’s withdrawals have pushed the deep aquifer down 600 feet. Green Bay had to tap Lake Michigan after depleting its groundwater in the 1950s.

In the Central Sands, scientists say a rapid expansion of irrigated agriculture may be largely to blame for the drawdown — setting the stage for a water fight between farmers and those who fear for the region’s lakes, rivers and wetlands.

In the Central Sands, there is no rock layer above the groundwater, and water is so close to the surface that the lakes are basically holes where groundwater emerges. Draw down the aquifer through pumping — for agricultural, industrial or municipal use — and there’s less to feed the surface waters.

“Every gallon of water that gets pulled out of the ground is a gallon that’s not going to the stream or lake it’s supposed to,” said George Kraft, a hydrogeologist with University of Wisconsin-Stevens Point and UW-Extension.

The state DNR evaluates and can put restrictions on well permits based on potential adverse environmental impacts. But its lawyers say the agency cannot take into account the cumulative effect of other owners’ wells.

To farmers who rely on irrigation to grow their crops in the Central Sands, Wisconsin’s current policy is fair. Why should one farmer’s well permit be denied because of his neighbors’ wells?

Besides, said Duane Maatz, head of the Wisconsin Potato and Vegetable Growers Association, an Antigo-based group representing the interests of 140 growers, there is no water shortage.

“Our groundwater is not decreasing,” said Maatz, citing data from irrigation wells showing water levels higher than last spring before the drought. “If the flows are different, there has to be another reason.”

But in many arid Western states, water withdrawals have long been tightly regulated. And some of Wisconsin’s neighboring states have begun to address groundwater depletion. Minnesota, for example, is developing groundwater management areas to address cumulative effects of pumping in heavily irrigated regions.

Several groups and individuals, including the Friends of the Central Sands, have sued DNR, alleging it failed to protect Pleasant Lake and other nearby lakes and streams when it issued two well permits to Richfield Dairy, a proposed 4,550-head operation in Adams County.

Although some believe LeMahieu’s amendment was aimed at protecting Richfield Dairy from legal challenges, late in the budget process, the language was changed so that the new law will go into effect in July 2014 and have no impact on the case.

“What the Legislature is saying is that we don’t care how high-cap wells are affecting our surface waters,” said Carl Sinderbrand, the attorney for the lead plaintiff, Pleasant Lake Management District, a governmental entity that maintains the lake.

Although the Supreme Court has determined that the DNR has the legal right to consider the adverse effect of a well on nearby water when issuing a permit, it did not directly address the issue of cumulative impacts, said Eric Ebersberger, the DNR water use section chief.

“Let’s say your well will draw down two inches; each of your five neighbors’ will too. I don’t have the authority to deny your well because your neighbors’ wells are already having an adverse impact,” Ebersberger said.

Farmers in a tight spot

The central Wisconsin landscape is dominated by big, flat fields. Long irrigation pivot arms  run from a central well, crawling in a big arc and spraying down onto neat rows of potatoes and corn. Wisconsin has almost 400,000 irrigated acres, about half of them here in the six counties that comprise the Central Sands -- Adams, Portage, Marquette, Wood, Waushara and Waupaca.

Without irrigation, yields in the porous Central Sands would drop sharply.

“We view ourselves as good guys,” said Justin Isherwood, a farmer who uses about a dozen high-capacity wells to irrigate his 1,400 acres of potatoes and other vegetables in Portage County.

“We're raising the food, we're getting dirty doing it, we listen to cowboy songs on the radio, how can we be to blame for anything?” Isherwood said. “It's not easy confronting that we just might be the bull in the china shop.”

“We’re using less and less water and yet we’re still blamed for the problems,” Maatz said. “Everybody wants to manage or regulate us out of business.”

Water advocates say they are searching for a more fair way to share the region’s water resources.

“We enjoy eating. We enjoy potatoes. We enjoy milk,” said Clarke, the Pleasant Lake homeowner who runs Friends of the Central Sands. “But there’s got to be a balance.”

The current policy leaves lakefront property owners like Wolf literally high and dry. In 2007, the local assessor dropped the real-estate values of lakefront property in the Long Lake area by 60 percent because of lower lake levels.

Meanwhile, permit applications are up dramatically, Ebersberger said, largely in response to last summer’s drought and the high price of corn. Well applications grew from 276 in 2011 to 416 in 2012, and they continue to be high this year, DNR figures show.

Unless something changes, Kraft said, “We’ll have more Little Plovers and more Long Lakes. And then we’ll have the political pressure to do something.”

This project was supported by The Joyce Foundation. The nonprofit Wisconsin Center for Investigative Journalism (www.WisconsinWatch.org) collaborates with Wisconsin Public Radio, Wisconsin Public Television, other news media and the UW-Madison School of Journalism and Mass Communication.