Scientists have realized they may have misidentified the source of Salmonella in beef cattle. They now realize it may be in the lymphatic system of cattle, making it harder to prevent than E. coli. 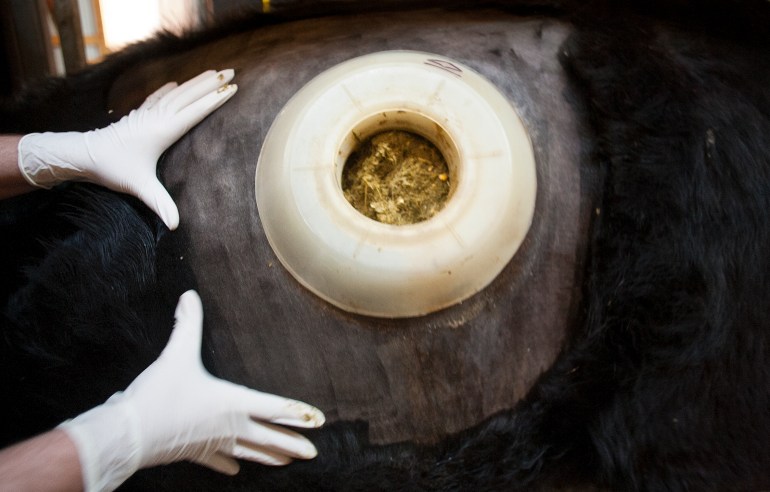 Digestion can be seen at work on a fistulated cow March 28, 2013, at Southern Illinois University’s Beef Cattle Center in Carbondale, Ill.. Researchers are allowed to peer inside the cow and observe digestion.

As recently as March of 2013, Salmonella Typhimurium in ground beef was linked to more than 20 human illnesses in six states.

In September 2012 nearly 50 people in nine states became ill from eating ground beef tainted with Salmonella Enteritidis, according to the Centers for Disease Control and Prevention

“It was always our working assumption that E. coli interventions should be controlling Salmonella,” said James Marsden, professor of animal science at Kansas State University. “E. coli is transferred from the beef hide to the carcass and works its way through the system. We thought this is what Salmonella did as well.”

Marsden, who thinks this is the biggest challenge facing the beef industry, has been writing about the topic for the industry blog “meatingplace”

“Incidences of E. coli have dropped sharply over the past 10 years, but Salmonella isn’t dropping, which is perplexing,” Marsden said. “And some strains of Salmonella that have been observed in beef are drug resistant strains, so they pose a public health problem.”

Researchers at Texas Tech University now believe that unlike E. coli, Salmonella is in the lymphatic system of cattle.

“In 2010 the industry was in a position to start asking questions,” said Guy Loneragan, professor of animal science and lead researcher at Texas Tech University. “We started looking at the lymph nodes which are internal and exempt from current prevention techniques.”

The rate of Salmonella positive tests for ground beef increased each year from 2009 to 2011, according to a 2011 from the Food Safety and Inspection Service (FSIS), the food safety branch of U.S. Department of Agriculture.

The agency has been testing for Salmonella in meat since 1996 when it implemented a plan to test for pathogens and hazards.

The scope and rate of sampling ground meat products is different than those used for intact products, such as whole chickens and turkeys. Any processing plant that produces at least 1,000 pounds of ground beef per day is subject to Salmonella testing.

If an egg facility has a Salmonella-positive test, eggs are not automatically recalled. They then do tests on the eggs. If the eggs are positive, they issue a recall. If not, then no recall. If ground beef tests positive for E.coli, it is recalled whether or not there are any illnesses. If ground beef tests positive for Salmonella ,it is not automatically recalled. It is only recalled if there is a human illness.

As of May 2013, processors were required to submit 325 grams of ground meat for testing. This is the same amount required for E. coli testing. The amount had previously been lower.

Marsden, the Kansas State expert, said that USDA recalls beef with any level of E.coli because it considers it an adulterant. When it finds Salmonella it doesn’t issue a recall because it is not classified as an adulterant.

“If USDA decides it is an adulterant that changes everything,” he said.  “That would put this on the front burner and will cause problems for the industry.”

Marsden said there have been citizen requests to USDA to declare Salmonella as an adulterant, but the agency has yet to do so.

A new paradigm in Salmonella-beef research

“This is important because lymph nodes are infinitely linked to beef, to ground chuck which is muscle, fat, lymph nodes and veins,” said Loneragan.

“It is impossible to remove all the lymph nodes – it isn’t an option,” he said.

Salmonella vaccinations and a diet that includes probiotics or direct-fed microbials are being used to reduce the prevalence of Salmonella in cattle.

Loneragan said that while research is preliminary, the findings are encouraging and warrant further consideration.

Pharmaceutical companies that manufacture animal probiotics are also looking into this topic. One company recently funded a study at Southern Illinois University in Carbondale, Ill.

The study was conducted by Amanda Conder, graduate student, and supervised by Rebecca Atkinson, a professor in animal science.

“Producers have to understand that it is already in the animal when it arrives at the feed lot. This cannot be addressed in the slaughter facility; it has to be up-stream. The owners may be shipping cattle that have Salmonella in them.” - Guy Loneragan, Texas Tech University

Conder was not allowed to say which company funded the research due to a confidentiality agreement.

Conder’s study looked at levels of probiotics fed to cattle in a feedlot environment and the impact on the weight gain of the animal and levels of E. coli, Salmonella and Clostridium perfringens, another pathogen. Specifically, she was trying to determine the cost effectiveness of using a probiotic for pathogen reduction.

She determined “there are benefits to feeding cattle for 30 days prior to slaughter with direct fed microbial (probiotic) supplementation at the low and medium dose level.”

Flies could play a major role in the transmission of Salmonella in beef cattle. Salmonella may live in flies and other insects that are associated with cattle, swine and poultry operations, said Loneragan.

There are more flies in warmer times of years and in warmer locations. This could be link to a higher rate of Salmonella found in the summer and fall seasons, and southern locations. This will continue to be researched.

“Right now we have a textbook understanding of this, but that is overly simplistic and it is not sufficient to explain the observed ecology,” said Loneragan. “We need to provide a better understanding of Salmonella in livestock populations and this will help us develop more effective controls.”

Beef cattle producers would need to assume responsibility for Salmonella prevention, if Loneragan’s research pans out. 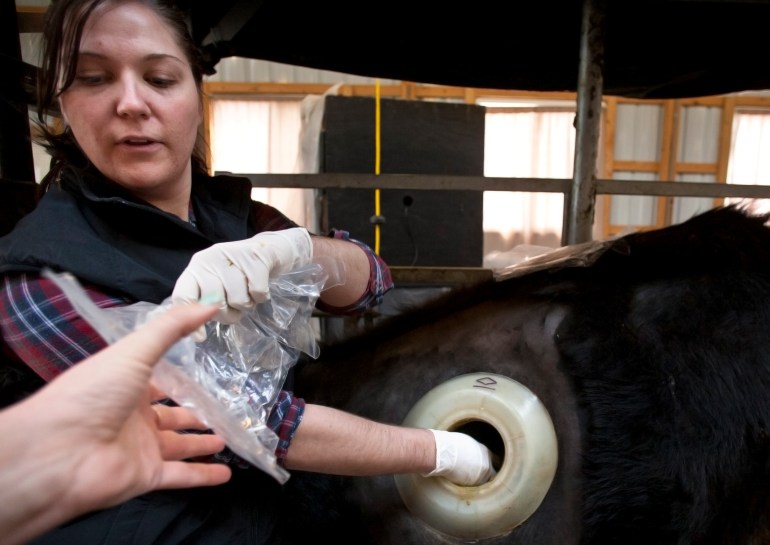 Amanda Conder, a graduate student in Animal Sciences at Southern Illinois University Carbondale, reaches into the rumen of a fistulated cow March 28, 2013, at the SIU Beef Cattle Center. A fistulated cow acts as a porthole into the rumen, which helps researchers observe digestion.

“Producers have to understand that it is already in the animal when it arrives at the feed lot,” said Loneragan. “This cannot be addressed in the slaughter facility; it has to be up-stream. The owners may be shipping cattle that have Salmonella in them.”

The costs to a producer for vaccines have not yet been determined.

Probiotic costs could be about $2 per animal for the duration of time it is in a feed lot.

Reduction, not elimination is the goal, said Marsden. He believes it would be very difficult to get to zero cases of Salmonella, or E. coli.

Due to the drug resistant nature of Salmonella in ground beef there a few post-slaughter prevention options.

Marsden said: “You would need some form of pasteurization to eliminate it, or irradiation, but I am not a big advocate for it. Consumers are against it. Irradiation has been a dead issue for a few years, but there was discussion about doing it again, in a more acceptable manner; it is a possible solution.”

Another possible post-harvest solution would be to treat the ground beef with ammonium hydroxide.

“I have done research with BPI for 10 years and while their main concern was E. coli, we did look at Salmonella as well,” said James Dickson, professor of microbiology and animal science at Iowa State University. “Ammonium hydroxide does control E. coli and Salmonella in ground beef. It doesn’t eliminate it, but it does substantially reduce it.”

Dickson’s research was funded by Beef Products Inc., but he says that didn’t influence the findings.

“Some people have said I have a conflict of interest when reporting what I found, since BPI paid for my research,” said Dickson. “I didn’t feel any pressure to say or find anything. In fact BPI was adamant that I publish the findings no matter what I found. That is unusual in this industry. Most companies want you to sign a confidentiality agreement agreeing not to publish anything.”

“If meat is prepared properly, Salmonella is neutralized,” said Marsden. “It can be in steaks and roast, not just in ground beef. But if it is all cooked right, it can be managed.

“We need to continue the pre-harvest research to reduce this in cattle. USDA is looking at this from a public health point of view. If we start to see outbreaks associated with drug resistant Salmonella, USDA will act.

“People do eat beef less than well done. They have done a good job education the public about Salmonella in chicken and pork, but not in beef.”

The check-off program is a producer-funded marketing and research program.

He later received a grant from the USDA Agricultural Research Service with additional check-off funding for the 2010 study.

The most recent study was funded by a USDA National Institute of Food and Agriculture grant, more beef checkoff money and private industry support.

Research of Salmonella in beef is much more recent than E. coli.  E. coli was declared an adulterant by USDA in 1993, giving the industry time to study and understand the E. coli transmission and to work on solutions.

“You have to think about where we are at the moment with E. coli and it is 20 years after a major outbreak,” said Loneragan. “We are two and a half years into this and we have already come a long way, but it has been a short time, we have more to learn.

We have only just begun to look at the ecology of Salmonella. We need to thing about a three year process to explore this.”