Buying a new farm tractor costs almost as much as a new home in a decent suburb.

What seems more unusual, for newcomers to farm economics at least, is that those shiny new models aren’t the hottest selling big iron on many dealers’ lots.  That would be the used tractors that were traded in when the new models rolled off the dealers’ flatbed trucks. 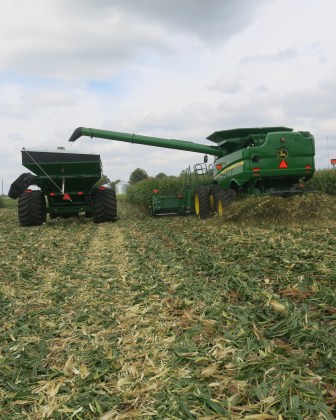 Farm equipment can sell for hundreds of thousands of dollars. Today, even used farm equipment is selling hot.

“Prices for used tractors are hotter than for new ones right now – going up more than 6 percent a year,” reports Greg Peterson. Peterson, is a Rochester, Minn., researcher, writer and market analyst who, as Machinery Pete, has been keeping tabs on trends and prices at between 900 and 1,000 farm auctions annually since 1989.

There are a lot of reasons why used tractors are selling briskly now.

Many are economic. High crop prices have afforded many farmers nice incomes.  Some will owe more tax on that income than they planned. The same potential six-figure tax credits that are pulling new machinery off dealers’ lots apply to used tractors too. Knocking a year’s depreciation off the price because the machinery is used makes those purchases more attractive to midsized farmers tilling 1,000 or 2,000 fewer acres than their uber-farming neighbors.

Others are personal, said Peterson, who even has been seeing some technological  dinosaurs sell for higher prices than the manufacturers listed 10, 20, or even 25 years ago.

“A lot of farmers prefer simple,” Peterson said. “They don’t want to have to take a laptop out to the field to fix it when something goes wrong.”

“Most of the time, no one is looking at the used side,” said Pat Happe, an executive at Iron Solutions, a Franklin, Tenn., provider of data, intelligence and technology that manufacturers and dealers use to increase profitability.

Happe , who previously was an Iowa farm machinery retailer for 28 years, estimates that used farm equipment sales in the U.S. may be around $20 billion, about the same volume as the market for new machinery.

Farmers require the biggest, most efficient and sophisticated farm machinery they can afford because of one implacable fact of rural life, Happe said.

“Realistically, you only have 10 to 15 days each spring to get a crop in the ground,” he said.  Soils are too cold for seed to grow before that window opens and plants won’t grow fast enough after it closes to beat likely first frosts.

“You’ve got the about the same amount of time to harvest in the fall, or losses start reducing your harvest,” Happe said.

The windows of agricultural opportunity  are the same for all farms, but not all farms are the same. And when the different needs of big farmers and smaller ones reach implement dealers’ lots, successful farm equipment dealers adapt by selling  the same tractor or other machinery item to farmers as many as five times over its working life, he said.

“Basically, you’ve got five different channels,” Happe said. The first are the biggest farmers, usually working 5,000 acres or more annually who buy brand new equipment and trade it in after a year.

“They pay more, but they’ve got enough land to spread out the cost of getting everything done in the 10 or 15 days,” he said.  And they have the security of all their equipment under warranty and covered by loaner agreements if something breaks.

Farmers with a bit less land, maybe 3,000 acres, stop at the next rung smaller. They buy the year-old equipment, keep it for two or three years or about the peak of its remaining useful life – “the maximum value for their investment,” Happe said – and then move on.

Farmers with 1,500 acres, then perhaps 500 to 1,000 acres, then under 1,000, make up the three remaining channels, each buying increasingly used equipment, he said.  Each in theory gets the most affordable equipment for his or her needs and the dealer makes money through parts and service work and also selling the same machine between four and six times.

Again, official statistics are sketchy or non-existent, “but when I was running the business in Iowa, we had a rule of thumb that every $1 in new equipment sales also meant $1.50 in used sales,” Happe said.

So, how does this work in the real world?

First, not all farm equipment goes back to original dealers for resale, said Greg Peterson, the Minnesota auction maven.

“Good equipment is scarce,” Peterson said. “It isn’t unusual to see flatbed (semi-trailer trucks) from North Carolina at an auction in North Dakota if good equipment is on the auction block.”

Second, it isn’t really clear how eagerly growers on the smaller end of the agricultural spectrum are to pick up equipment that may be heavily used by the time they see it, said John Cowan, chairman of the Big Iron Farm Show in Fargo, N.D., where more than 800 dealers, vendors and other ag business companies hawked their services to farmers earlier this month.

Farmers are looking for good deals, Cowan said, “but nobody is looking much at anything more than five years old.”