Iowa’s small farms are on their own when it comes to work safety, even though farmers suffer more fatal occupational injuries than any other kind of worker in the state.

Limited Occupational Safety and Health Administration enforcement and coverage favors large farms, leaving the rest on an honors system in which dangerous farm practices fly under the radar until a serious, and often fatal, injury occurs.

“We’re the number one ag state in the country and we’re not doing anything to protect the people who produce our food,” said Rich Gassman, safety director at Amana Farms – one of the state’s largest agricultural producers with 20,000 acres of land.

But farm safety specialists say enforcement is hard to come by. OSHA officials typically do not learn of a violation until a serious injury has happened.

Moreover, the Iowa Legislature shows no interest in pushing for major farm safety reforms for a variety of reasons, chief among them distaste for over-regulating the state’s prime industry populated by people who are independent, except when it comes to uniting against efforts to tell them what they can and cannot do.

While farmers with any number of employees are legally responsible to comply with all regulations, federal funds only allow OSHA to issue and enforce them on farms with 11 or more workers. That accounts for just a small portion of Iowa’s farms.

An IowaWatch investigation revealed holes in the tracking of state OSHA data. Statistics for the number of farms covered by OSHA inspections are not kept in Iowa, for example. The U.S. Department of Agriculture reported that, as of 2006, OSHA programs covered only 10 percent of all farms in the country.

During 2011, only 31 inspections were performed on Iowa’s 92,300 farms. Iowa Workforce Development Labor Services records show that OSHA has issued 27 safety citations since the beginning of 2008, with total penalties amounting to $104,900.

More than 30 percent of Iowa’s fatal occupational injuries in the year 2011 were in the agriculture industry, the Iowa Fatality Assessment and Control Evaluation program reports.

Farm deaths in Iowa averaged 25 deaths per year between 2001 and 2011, an IowaWatch analysis shows. This includes farmers, farm workers, farm family members and related commercial grain cases. Data for 2012 were not available yet.

The next highest job sector was transportation, with 15 confirmed deaths in 2011.

Overall, agriculture-related fatalities are down from the 1990s. In 1998, about 80 people suffered fatal farm injuries in Iowa.

“I don’t want to have to call another spouse and say they’re being taken to the hospital in an ambulance,” Gassman said.

THE STATISTICS GET PERSONAL

Sally Stutsman and her husband, Roger, know about farm safety all too well. Five years ago, their son, Michael, was killed in a farming accident on the family’s farm near Riverside. He was 33.

Michael was working under a combine’s raised corn head with a hammer when the elevated equipment fell and pinned him.

Just one month before the accident, a new model of that combine was released with a safety feature that would have prevented him from needing to stand under the machine at all.

Michael Stutsman left behind a wife and newborn daughter. “I think about my son every day,” Sally Stutsman, now a member of the Iowa Legislature, said. “I always will.”

Beyond the emotional impact of fatal farm accidents, the loss of farm operators takes a significant financial toll. The National Safety Council estimates the cost of each death to the victim’s family and community at $790,000. 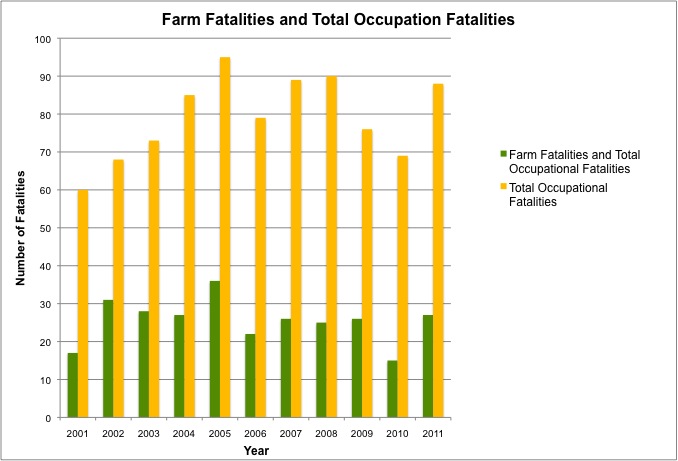 “We need to do what we can to make people aware that farming is a dangerous profession,” Stutsman, a Democrat in the Iowa House, said.

Several farm safety groups are coming together in Iowa to do just that. They are working through the Iowa Center for Agricultural Safety and Health, better known as I-CASH, a collaborative effort between the University of Iowa and Iowa State University that the Iowa Legislature created in 1990. The center, located in the UI College of Public Health, is one of only a few like it in the nation.

One area farm safety groups like I-CASH are focusing special attention on is tractor rollover.

Statistics suggest that rollover protection may be the most significant safety regulation when it comes to saving lives.

In one case, a 71-year-old Iowa farmer was thrown from his tractor while hauling brush along a 50-foot bank on his property. When the tractor became too close to the steep edge, it overturned sideways and rolled 20 to 30 feet down the embankment into a creek where the man was later found dead.

The Iowa Fatality Assessment and Control Evaluation does not release in its reports the identities of victims, victim’s families and victim’s employers. News reports from June 2011 identified the 71-year-old farmer as William Brich, from near Neola in Pottawattamie County, who died when he drove too close to a creek embankment.

OSHA standards for farms set by the U.S. Department of Labor, cover:

He left behind a lifetime of farming, business and service in the community, and a wife of 50 years.

The tractor was not equipped with an important safety feature called ROPS, or rollover protection structure. The structure is a cab or frame that, when attached to the top of a tractor and used with a buckled seatbelt, protects the operator in a rollover. ROPS is designed to withstand the weight of a tractor rolling over three times.

Tractors aren’t the only vehicles to blame. Iowa Fatality Assessment and Control Evaluation statistics also suggest a rise in deaths caused by ATVs, which are becoming more popular for use around farms, particularly for farm youth.

But protecting against rollovers is vital, said LaMar Grafft, who has been a part-time paramedic for 25 years. He also is a program manager in the University of Iowa’s Occupational and Environmental Health Department and serves on the I-CASH board.

“Simply put, 20 to 25 percent of all farm fatalities are because a tractor rolled over,” Grafft said. “If we placed rollover protection on every tractor in the U.S. we would save almost all of those people.”

OSHA’s standard on rollover protection states: “All tractors with more than 20 horsepower operated by an employee and manufactured after October 1976 must be equipped with a roll-over protective structure.”

Grafft said he’s seen too many farm injuries to count.

Despite studies that show the effectiveness of ROPS in preventing rollover fatalities, many farmers continue to operate without one. Nearly half of all tractors used in the Midwest are not equipped with ROPS, a 2011 National Agricultural Statistics Service report states.

This is partially due to the fact that older tractors, often with an outdated tricycle design that offers less stability, still are usable for smaller farm jobs such as hauling or mowing.

Retrofitting usually is available from the manufacturer to bring modern safety features to old models, but safety experts IowaWatch interviewed said farmers choose to forego this upgrade for multiple reasons: the additional height can interfere with storage, farmers don’t want the hassle of contacting the original manufacturer, the structure ruins the antique look, and the price of upgrading stands in the way.

Retrofitting a tractor with ROPS costs farmers about $1,000.

Gassman, from Amana Farms, considers this a small price to pay. "We have several older tractors. It's a given now that we'll add ROPS," he said.

Ask farmers why they resist change in the way of safety precautions and they’ll often tell you “the culture” isn't suited for it.

It may be the reason that farmers opt out of using ROPS or, to save time, use a bypass-start, or jump-start, to get their tractors going.

Bypass-starts are known to lurch a tractor into gear so that the tractor can run over the farmer who is standing on the ground to jump-start the tractor. “Every time you get away with it … you’re reinforcing it,” Gassman said about unsafe shortcuts farmers take.

Roger Stutsman began milking cows at the age of 10 and has been farming ever since. He calls farmers a stubborn group. "We're just such an interesting breed of cats," he said.

He admits to having shared the mindset of “it's never going to happen to me” when it comes to farm safety. “Maybe my neighbor, but never me."

That is, until his son’s life was taken while farming.

"We know we're beating our heads against the wall to try and get farmers to change ... It's going to have to be through the kids, not the grandparents."- Roger Stutsman

Now 68 and a five-year member of the I-CASH board, Roger Stutsman admitted that farmers are a hard market to penetrate. "We know we're beating our heads against the wall to try and get farmers to change," he said. "It's going to have to be through the kids, not the grandparents."

His wife, Sally, said one constructive outcome of Michael’s death has been her husband’s enthusiasm to work with farm safety and “make our personal tragedy a positive.”

Safety specialists have differing ideas on what should be done to lessen the number of agriculture-related deaths each year.

Tightening regulations is one option.

Some states already are taking on stricter OSHA coverage than the federal law requires by including farms with fewer than 11 workers. While safety specialists and farmers IowaWatch interviewed recognize the benefit of expanding OSHA or increasing enforcement, they don’t realistically see it working.

Key state legislators said they do not know of any pending action or proposals on the state level to regulate farm safety.

“Farmers are such an independent group that it would be hard to regulate them,” Sen. Dick Dearden, D-Des Moines, and vice chairman of the joint Agriculture and Natural Resources Appropriations Subcommittee.

Rep. Jack Drake, R-Griswold, co-chairman of the Agriculture and Natural Resources Appropriations Subcommittee and a member of the House Agriculture Committee, said any increased regulation would be challenging because people are tired of government regulations.

“Every time you turn around, you're almost in violation of something," Drake said.

Drake, who at 79 still farms in Cass County in southwest Iowa, said he even hesitates when getting ROPS for some of his tractors that he doesn't use very often.

Rep. Sally Stutsman, who represents Johnson County in Eastern Iowa, predicted that resistance from farmers would be more counter-productive than productive because it would cause more headaches in the long run than regulations.

She said she supports giving monetary incentives or tax credits to farms that meet Certified Safe Farm requirements. “I favor the approach of a carrot, rather than a stick,” she said.

“I think it’s a good time to have that discussion of what kinds of incentives we put in place,” she said.

Farms gain the Certified Safe Farm rating by passing a voluntary intervention program that involves occupational health screenings and on-farm safety reviews. More than 600 farms have participated in the program since the University of Iowa started it in 1998, the UI College of Public Health reports.

Amana Farms is one of them. Gassman said following Certified Safe Farm standards cut accident rates in half.

Programs like I-CASH attempt to create change through safety education.

But entities promoting workplace safety – the Rural Health and Safety Clinic of Johnson County, for example – always will depend on a fragile relationship with farmers. Safety regulation advocates suggest rather than force safety improvement.

They try to build credibility with farmers locally, which means they do not push for regulations.

“Our outreach can either be a big win or a big bomb,” Roger Stutsman said. “But we’re trying.”

This project was produced by Iowa Center for Public Affairs Journalism-IowaWatch.org, a non-profit, online news Website dedicated to collaborating with Iowa news organizations to produce explanatory and investigative work.