After years of disagreement, Congress finally agreed upon a nearly $1 trillion Farm Bill last week that cuts billions of dollars from the federal budget while also boosting crop insurance programs for farmers.

Projections from the Congressional Budget Office and lawmakers claim the bill will save anywhere from $16 billion to $23 billion. To make the cuts, funding for the Supplemental Nutrition and Assistance Program -- also known as SNAP – will be cut by $8 billion. On top of that, billions of dollars going to farmers as part of an agriculture subsidy program called direct payments will also be cut.

Here are seven articles to help break down the more than 900-page piece of legislation:

While many media reports have highlighted how the new Farm Bill will eliminate direct subsidies and cut billions from the Supplemental Nutrition Assistance Program, few have mentioned how the bill will also undermine promises of increased government transparency.

2. The Economist: "A trillion in the trough"

This article from The Economist pegs the Farm Bill as "a strange piece of legislation" that sends benefits to an odd combination of the poor and the rich.

In addition to pointing out multiple defects with crop insurance programs, the article also argues that the Farm Bill makes little economic sense from an international trade perspective. In fact, as a penalty for keeping cotton subsidies in place, the World Trade Organization will require the U.S. government to pay $147 million a year to compensate farmers in Brazil, according to the article.

3. The Wire: "The Geography of the Just-Passed Farm Bill"

"The Geography of the Just-Passed Farm Bill" provides helpful contextual information on where Farm Bill money will go.

In one heat map, viewers can see which states collect the most money from crop insurance payouts, otherwise known as indemnities. In general, farmers in the Midwest and the upper Great Plains regions receive the most.

In another map, viewers can see which states receive the most in food assistance payments, a more geographically diverse and spread out map compared to crop insurance.

This Washington Post article uses information from the Congressional Budget Office to chart the Farm Bill's cost and essentially answer the question: "So what's actually in it?"

According to the article's pie chart, almost 80 percent of the Farm Bill's cost will go toward "food stamps and nutrition," a total of about $756 billion. The second largest section of costs, about 10 percent, is dedicated to crop insurance and risk management programs -- or nearly $90 billion in total.

This technical article summarizes some of the key farm safety net provisions in the new Farm Bill, including: Title I Commodity Programs and Title XI Crop Insurance.

Farmdoc Daily is produced by The University of Illinois Urbana-Champaign's Department of Agricultural and Consumer Economics. The goal of the publication is to provide crop and livestock producers in the U.S. Corn Belt with up-t0-date access to integrated information and expertise to better manage their farm businesses.

In this Harvest Public Media article, reporter Amy Mayer provides an overview of the Farm Bill and briefly highlights the sentiments from key political players involved with the legislation.

Readers can find helpful links to other Harvest Public Media coverage on the Farm Bill throughout the article, as well.

Harvest Public Media is a reporting collaboration focused on issues of food, fuel and ?eld. Based at KCUR in Kansas City, it covers agriculture-related topics through an expanding network of reporters and partner stations throughout the Midwest.

Here, Michael D. Shear of the New York Times recaps the presidential signing of the Farm Bill while providing other important information on the bill.

“We’ve had the strongest stretch of farm exports in our history,” the article quotes President Obama during the bill's signing in Michigan. “What we grow here and what we sell is a huge boost to the entire economy, but particularly the rural economy.”

The New York times report also states that farm income is expected to total $131 billion in 2013, a 46 percent increase since 2008.

Farmers from central Illinois share their thoughts on the Farm Bill 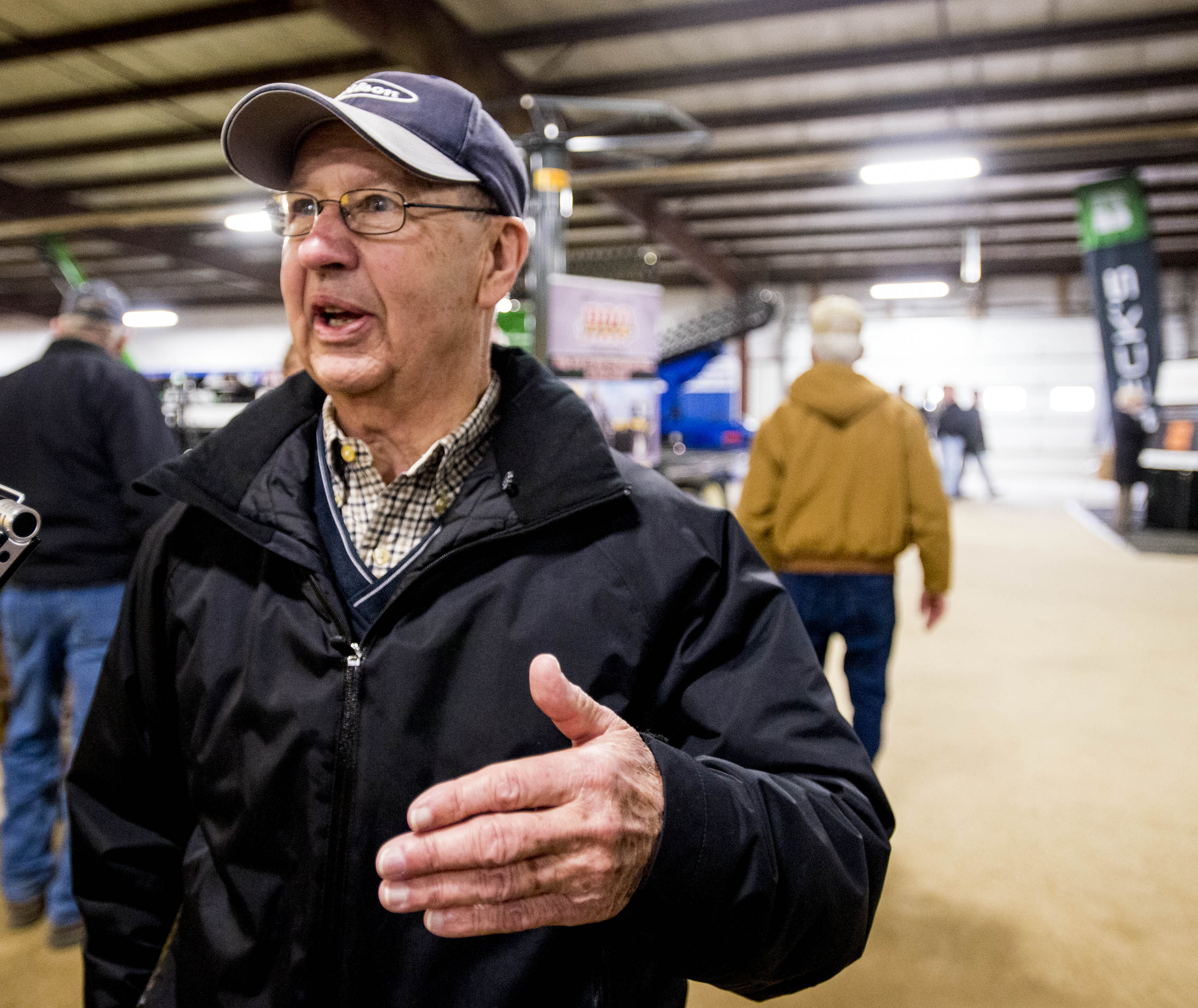 Larry E. Roderick of rural Vermilion County at the Midwest Ag Expo in Gifford, Ill., on Jan. 30, 2014. “Input costs are higher, maintenance and harvesting costs are higher, and many of us are just unwilling to take that without some fallback position, which would be insurance,” Roderick said in regard to strengthened crop insurance programs under the new Farm Bill. Roderick is a corn and soybean farmer from just north of Danville, Ill. 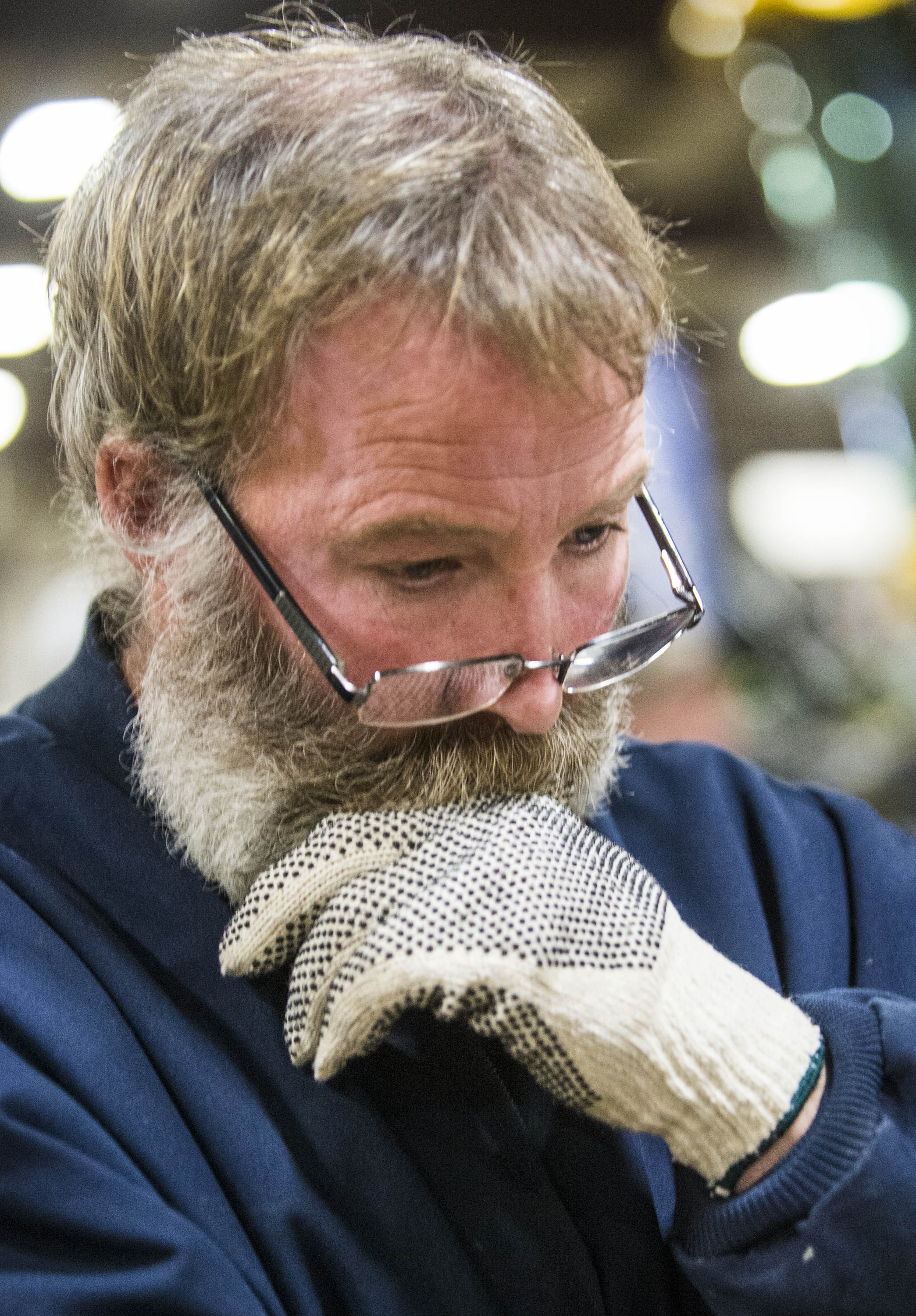 William Kinsella III, who raises livestock in rural Bloomington-Normal, thinks about how he is affected by the Farm Bill. “Well, all I know is that whatever you do, somewhere along the line you have to be able to flip the bill," said Kinsella. "If you can’t, you have to do things differently. So for me, it’s easy to come up with a plan, but who’s going to make it work?” 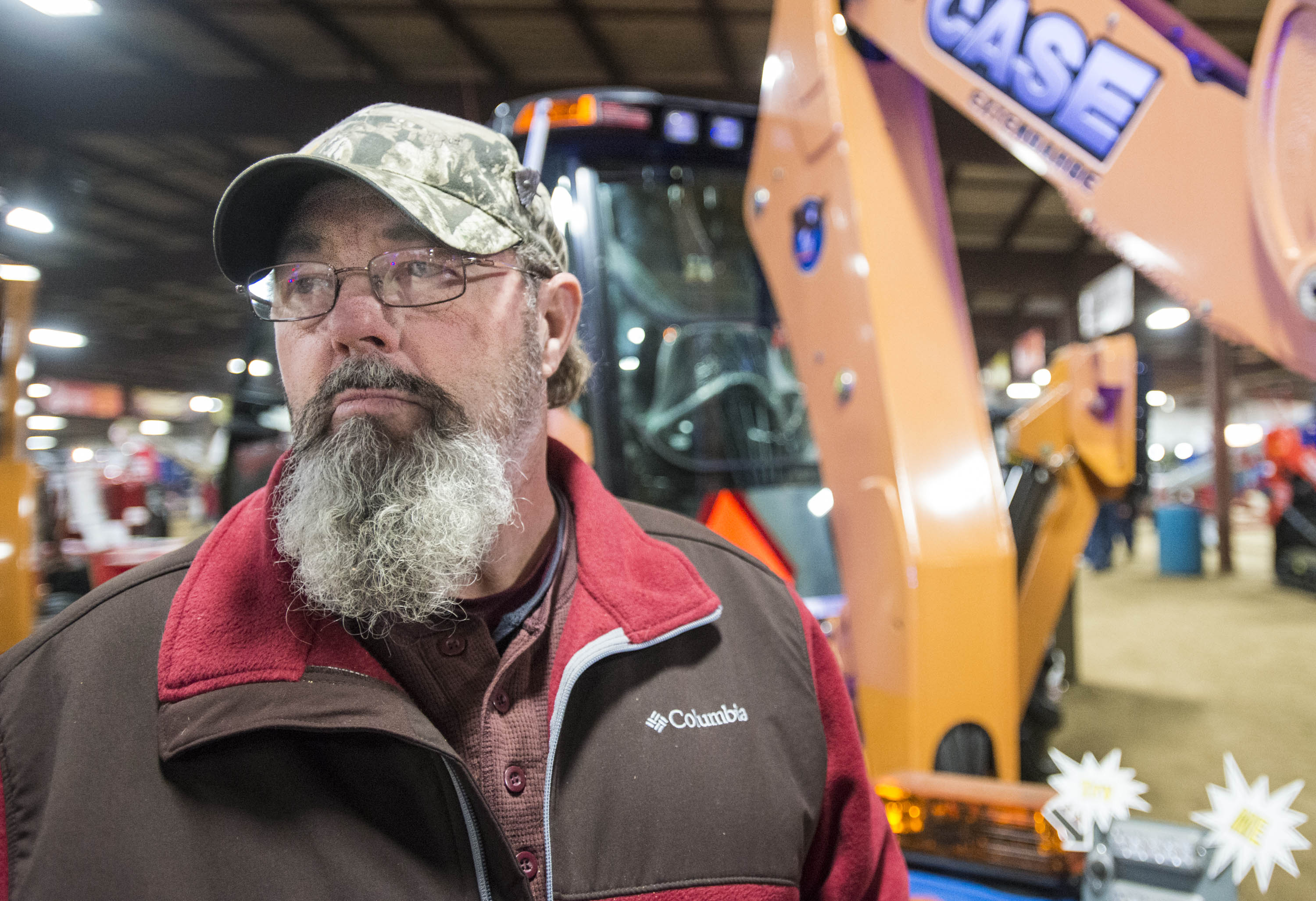 Leonard Johnson used to farm corn and soybean just west of Peoria. Here, he is pictured at the Midwest Ag Expo in Gifford, Ill., on Jan. 30, 2014. 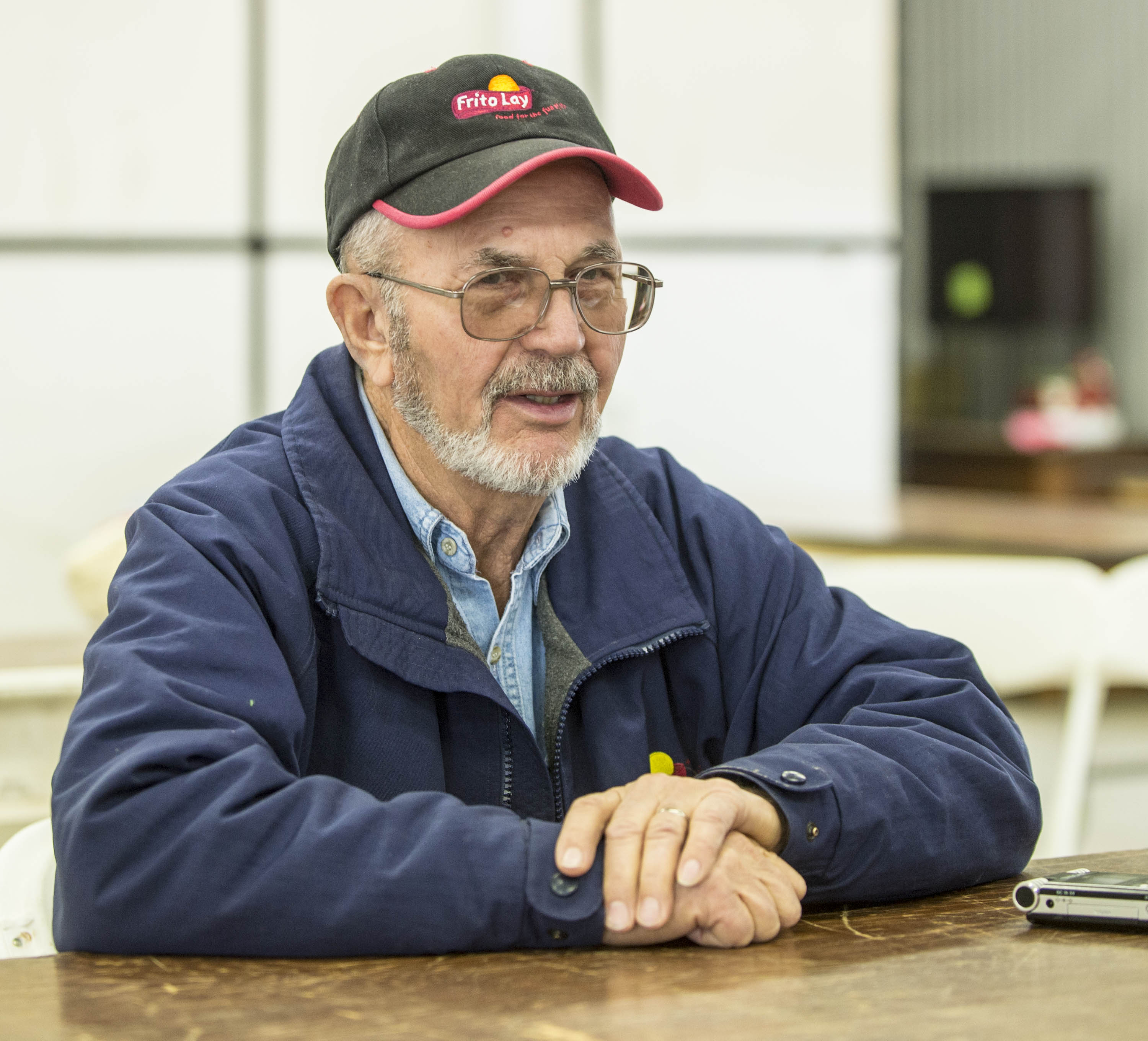 Jim Hughes talks about farming at the Midwest Ag Expo on Jan. 30, 2014. Unlike most farmers, Hughes said he won't be affected by the changes to crop insurance programs. “It sounds good, but I think a lot of times farmers break even, so it’s just money that goes to insurance companies,” Hughes said. “I haven’t had it.” 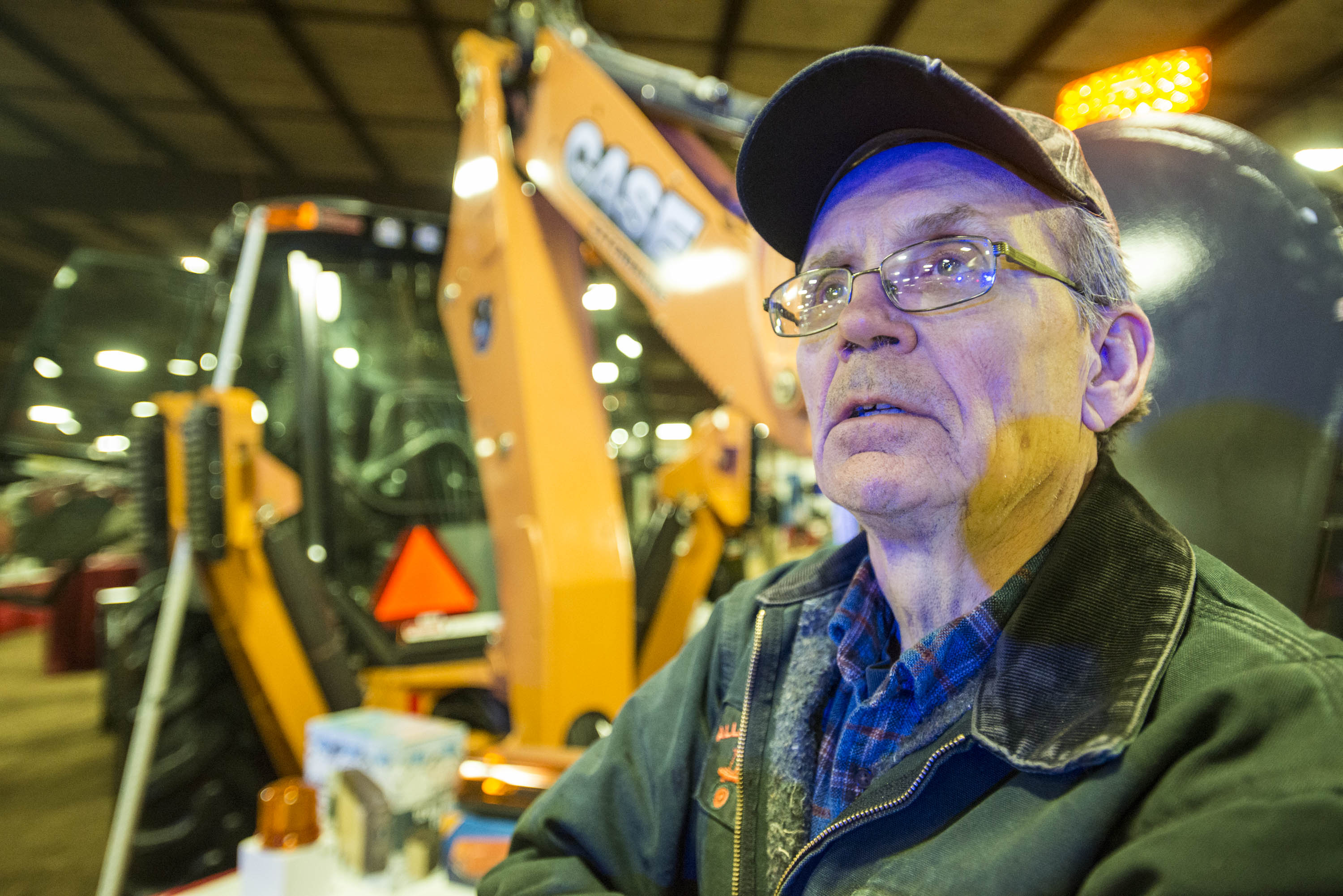 Robert Blue of Canton, Ill., at the Midwest Ag Expo on Jan. 30, 2014. “To me, I just can’t hardly believe some of the payments these guys have gotten,” Blue said in regard to direct payment subsidies. “We never did get that with our family farm.”