Idaho recently became the first state to have both a modern-day farm protection law and an agriculture disparagement, or “veggie libel,” law.

The surge in these types of laws is “just so wrong,” said Ken Paulson, president and chief executive officer of the First Amendment Center.

The new Idaho law does not ban the use of photos. Rather, it only bans video that could end up on YouTube, Paulson said.

“It’s not addressing the real harm here,” Paulson said, adding that politicians are protecting big industry interests as opposed to the safety of their constituents.

“They are trying to criminalize things already criminal – trespass, coercion, fraud or threat of violence,” Paulson said. “Of course, those are all illegal anyway.”

See also: "States restrict drone use because of privacy concerns"

Nine states have some version of a farm protection law and 13 states have agriculture disparagement laws, according to an analysis conducted by the Midwest Center for Investigative Reporting.  Last year, just five states had legislation that limited reporting on agriculture.

Farm protection law data include states with old, new and modified versions of the law.

Farm protection or “ag-gag” laws  limit access to agriculture facilities and prohibit the use of audio and video recording of working agriculture operations.

Agriculture disparagement laws restrict what media and individuals can say about agriculture products and production practices.

North Dakota has an older version of a farm protection statute and an agriculture disparagement law. However, its law is limited to animal research facilities and is not as broad in scope as the Idaho statute. 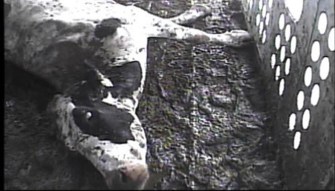 Photo provided by the Humane Society of the United States

In 2008, a private undercover investigator used a hidden camera to record footage of animal abuse at a California slaughterhouse. That investigator's actions would be illegal under many new "ag-gag" laws.

Farm protection laws got a boost in 2012 when Iowa adopted the first of the modern-day versions.

“The ag-gag laws protect something that no citizen in this country wants to have protected, and that is the potential for bad behavior in the creation and processing of our food,” said Sandra Baron, executive director of the Media Law Resource Center in New York.

The Idaho Agriculture Disparagement Law was enacted in the 1990s during a movement by the agriculture industry to limit what media and media personalities could say about agriculture products.

One prominent agriculture disparagement case is the Texas Beef Group’s lawsuit against Oprah Winfrey for a program she aired about “mad cow” disease.

Another is a pending case in a South Dakota court that was filed by Beef Products, Inc. against ABC News for the network’s coverage of lean finely textured beef, also known as pink slime, in 2012.

Anita Carswell, Guardian campaign manager for In Defense of Animals, said her group sent out email notices to supporters in Arizona and previously in New Jersey, Idaho, Indiana and North Carolina when those states unsuccessfully tried to pass similar legislation.

“The ag-gag laws protect something that no citizen in this country wants to have protected, and that is the potential for bad behavior in the creation and processing of our food,” said Sandra Baron

Last year, Idaho enacted a law that prohibits the use of drones to record a person’s activities without their consent.

Between that drone law, the new farm protection law and the 1990s agriculture disparagement law, Idaho could be the least-friendly state when it comes to agriculture reporting.

“It is ridiculous. There is no way to have honesty in reporting in that state,” said Carswell, who said she sees a “real bias in the Idaho legislature” in favor of agribusiness.

Baron said that the different kinds of ag-gag legislation protect “all the wrong things.”

“[This] should rise to the highest attention level of every citizen because it goes straight to the heart of the very kitchen and their kitchen tables – how they feed themselves and their families,” Baron said.