The full 2012 Census of Agriculture will also include more details about all of the individuals who own and work on farms. The preliminary report only profiled individuals listed as “principal operators.”

Following a 2002 Census change, farm operations now can report up to three operators. 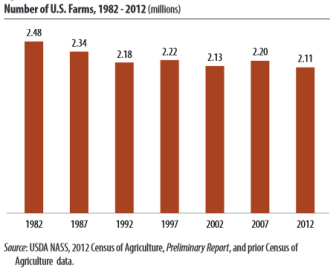 Graphic provided by the USDA

The preliminary Census of Agriculture results found that the total number of U.S. farms decreased.

Among that list, Nebraska and Texas were the only two states that reported an increase in total number of farms.

The other eight aforementioned states reported decreases in total number of farms.

Besides the general decrease in farm operations, the partial 2012 Census suggested that several other factors could dramatically affect agricultural production throughout the country.

Friday’s full report will provide a benchmark to evaluate the impact of recent agricultural initiatives and policies.

Here is a look at what to watch for in the full release. 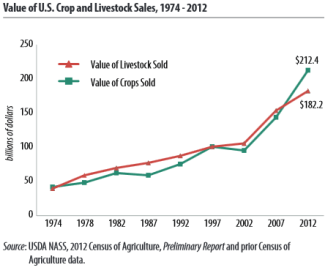 Graphic provided by the USDA

Preliminary data from the 2012 Census of Agriculture show that, in general, sales from agricultural products have increased from previous years.

Legislators in Iowa and other major egg-producing states are challenging California’s Proposition Two, a piece of legislation that sets housing standards for egg-producing hens for any company selling eggs in the state.

The new standards will go into effect at the beginning of next year.

2014 Farm Bill and the elimination of direct payments 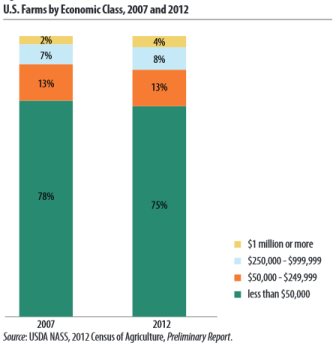 Photo provided by the USDA

According to preliminary census data, the majority of U.S. farm operations fall under the $50,000 class.

These payments were linked to commodities such as corn, wheat, soybeans and oilseeds. As the payments are phased out, some producers that have historically depended on the government subsidies could become economically burdened.

Grains, oilseeds, dry beans and dry peas were the top agricultural products in Iowa and Illinois, according to the 2007 Census of Agriculture. They earned producers in those two states a combined $23.4 billion in sales.

Data show that Illinois and Iowa’s second-leading agricultural products, hogs and pigs, brought in a combined total of just $5.9 billion.

California was the only top agriculture-producing state that did not rely heavily on grains, oilseeds, dry beans and dry peas, according to the 2007 Census.

The Porcine Epidemic Diarrhea Virus (PEDv) is a lethal disease that food-safety inspectors detected in the U.S. pork supply starting in May of last year. Since the disease’s detection, it has spread throughout 29 states.

Officials estimated that the disease has killed as many as 7 million pigs, according to the Pork Checkoff program.

As the disease continues to kill piglets and continues to reduce the number of hogs going to market, the pork industry may suffer.

Hogs and pigs were listed as a top product in seven of the top-ten agricultural producing states.

The 2012 Census of Agriculture will provide a snapshot of the hog and pig sector from before the PEDv. It will then help the U.S. Department of Agriculture and others in the industry to assess the true damage the disease is causing.

Iowa could be the state with the most on the line.

Grains and oilseeds, hogs and pigs, and poultry and eggs are three of its top products.

California’s agricultural economy was driven by $11 billion in revenue from fruits, tree nuts and berries, along with $6.5 billion from the milk and dairy industry. Direct payments and PEDv will likely have little effect on the state.

However, the ongoing drought in the state and region could drastically impair outputs.