Attorney Karla Altmayer dealt with her first case of sexual assault of a migrant worker in 2010.

An intern at the Legal Assistance Foundation at the time, Altmayer said a pregnant mother of two told her the owner of the meat packing plant she worked at in northern Illinois repeatedly asked her to have sex with him.

When the woman refused, the owner retaliated by making her carry 70-pound pork legs. She was eight months pregnant at the time.

“One day she decided to confront the employer,” Altmayer said, “and the employer responded saying undocumented women like you have no rights, and he suspended her indefinitely.”

Altmayer was able to get the woman her job back, which was what the woman wanted since she did not have immigration status and needed the money. She later moved to a different state with her family and did not pursue a lawsuit.

Since that case, Altmayer, along with attorney Allison Creekmur, have been waging a battle against sexual harassment and abuse of female migrant workers.

“For my first year and a half, I hardly had any cases,” Altmayer said. ”And the reason why was because farm worker women were not coming to me to talk to me was because I’m an outsider.”

Now she has seven cases pending.

Altmayer found that building relationships with community leaders was key in developing trust among the migrant community. This way, if a migrant worker experiences an issue such as sexual harassment or abuse in the workplace and talks to a community leader about it, the community leader has Altmayer’s contact information and additional helpful fliers to give the worker.

Over the course of her two-year fellowship with Legal Assistance Foundation, Altmayer has developed relationships with community leaders from organizations such as Community Health Partnership, Centro de Trabajadores Unidos and Migrant and Seasonal Head Start programs throughout the state. 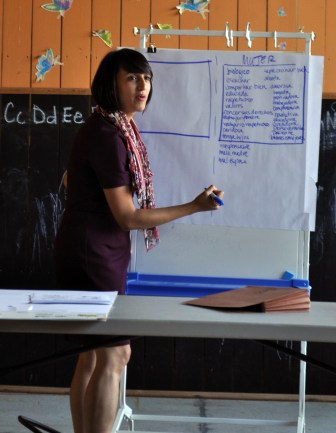 In addition to Altmayer’s sexual harassment and assault work, her coworker, Creekmur, a VISTA AmeriCorps attorney, focuses on training those partners on how to identify labor trafficking situations.

Together, the two teach community leaders the “red flags” of what forced labor look like.

Some red flags for labor trafficking include an employer holding a worker’s documents and controlling access to food and communication. A red flag may also be a worker talking about owing debt.

“We have this population that’s at enormous risk for it because they’re so exploited and isolated,” Creekmur said.

Creekmur also said that community leaders have told her practices such as farm labor contractors holding a worker’s documents have been normalized.

Altmayer said there are no specific red flags for sexual assault and harassment because it has become “a cultural issue of gender-based violence that is prevalent throughout the workplace.”

The problem is more prevalent than people may realize.

Eighty percent of farm worker women said they experienced some form of sexual harassment in a Southern Poverty Law Center survey of 150 Mexican women working the fields in California’s Central Valley in 2010.

Altmayer has been conducting a similarsurvey in Illinois to find out how many migrant women experience some form of sexual harassment, whether verbal or physical.

She plans on publishing the survey results this fall.

One way she collects survey data is at theworkshops she puts together to raise awareness about gender-based violence issues for migrant workers.

Last month’s workshop at the River Valley Head-Start in Kankakee, Ill., drew 12 migrant workers and two community leaders, who participated in a discussion and role-play exercise about how to interfere with sexual harassment in the workplace.

Maria de La Cruz, a participant at the workshop, said verbal harassment happened every day at the factory where she works in Manteno, Ill., but is afraid interfering will make the harasser turn on her instead.

“[My husband] says when I interfere in problems like this, then I will have the problems,” said Maria de La Cruz, a participant at the workshop. “Sometimes, he says you can stop it, but when you see fighting, no.”

Altmayer said the cases she has received in the past year have been because the harassment had become very egregious. She said that she hopes these workshops will help to alleviate the fear of reporting harassment.

Her fellowship ended in August.

Legal Assistance Foundation will absorb her cases, but it may not have the funding to continue the workshops for migrant workers, Altmayer said.