As companies and landowners continue to settle on agreements to begin fracking, a handful of federal reports and studies have suggested fracking for gas and oil may present certain health risks.

A 2012 progress report from an Environmental Protection Agency study, for instance, found that wastewater from fracking is typically stored on site before it is disposed in an injection well or treated at a wastewater-treatment facility.

And that wastewater contains high concentrations of potentially dangerous chemicals.

The study’s final results will be released later this year.

“These halogens are difficult to remove from wastewater,” the report continued. “If discharged from treatment works, they can elevate chloride and bromide concentrations in drinking water sources.” 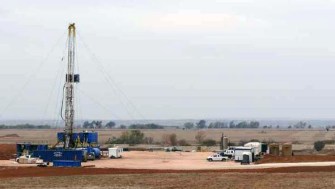 The exact number of facilities accepting fracking wastewater is unknown, and 15 facilities the EPA identified did not have standards. The lack of standards is a problem the Government Accountability Office recently found across eight states conducting high-volume hydraulic fracking.

Richard Straeter, district manager for fracking group Woolsey Operating Company LLC, said that much of the opposition against fracking comes from areas with little fracking experience.

“The areas that they’re not receptive tend to be areas where there is no historical oil and gas production,” Straeter said. “I would just recommend they talk to people in other areas where it’s gone on for half a century.”

The United States Geological Survey found that even though there are environmental hazards involved with fracking, issues can be avoided by adhering to proper practices.

Still, researchers working on a joint study between the USGS, the Department of Interior, the Department of Energy and the EPA requested $18.6 million in funding for next year, an increase of $8.3 million from this year’s budget. The added financial backing is to further research the environmental, health and safety concerns related to hydraulic fracturing.

“The areas that they’re not receptive tend to be areas where there is no historical oil and gas production." - Richard Straeter

The USGS plans on researching water quality and availability prior to and after drilling, as well.

In addition to health concerns, fracking consumes billions of gallons of water. In the aftermath of a 2012 Midwestern drought and on ongoing crisis in California, water consumption may be a major roadblock for fracking progress.

The EPA’s study found an average of 1.6 million gallons of water per well were used in Colorado in 2011. Throughout the entire state, wells used up 4.9 billion gallons.

Researchers working on the USGS study plan on researching ecological impacts from contaminants and the likelihood of fracking triggering earthquakes.

The Illinois Department of Natural Resources revised its draft of the rules for high volume hydraulic fracking. In order to receive a permit to frack, the proposed rules state a company must have an insurance policy that covers losses or claims in the event of an earthquake of M 4.5 or higher.

Additionally, department officials added a stipulation mandating companies can only hold wastewater on site for a maximum of seven days.