The U.S. Environmental Protection Agency and the Army Corps of Engineers officially withdrew a major part of the controversial Waters of the U.S. rule last week.

The two federal agencies announced on Jan. 29 they are specifically withdrawing an interpretive rule that aimed to clarify which “normal” farming activities would be exempt under the Clean Water Act. Farmers and ranchers throughout the country widely opposed the interpretive rule, as many were concerned it would bring unnecessary regulation to their day-to-day agriculture operations.

“It’s very concerning,” said Lin Warfel, an Illinois corn and soybean farmer, in November of last year. “The ambiguity of the regulations will lead to lots of problems for me as a farmer.”

Listen: the Waters of the U.S. debate

The interpretive rule withdrawal was part of an agreement Congress reached while passing the 2015 Omnibus Appropriations package, a $1.1 trillion spending bill that outlines how and where the federal government can use its money. 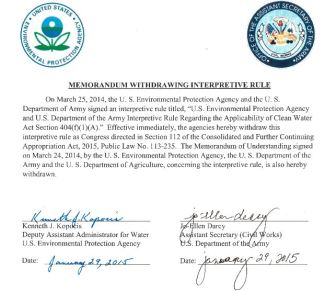 Click on the image to read the official withdrawal notice submitted by the EPA and Army Corps of Engineers.

Currently, the Clean Water Act’s Section 404 states that most routine and ongoing farming activities do not require special EPA permits, unless those activities result in discharge or dredge materials directly entering streams, rivers or other waters regulated by the EPA.

“Farming activities do not require Section 404 permits when they do not occur in waters of the United States, including wetlands, or do not involve dredged or fill material,” according to the agency.

The Clean Water Act has been the predominant piece of water regulation in the United States since its early versions in 1948.