The average yearly amount of taxpayer money funding the highly subsidized federal crop insurance program has more than doubled in just over a decade.

From 2003 through 2007, the government spent an average of $3.4 billion per year on crop insurance, according to U.S. Department of Agriculture data.

The USDA’s crop insurance program is administered by the Risk Management Agency and is widely regarded as the main safety net for farmers. Agriculture officials say the increased funding has helped growers protect themselves from disastrous weather and unfavorable market conditions, such as unforeseen drops in commodity prices.

For an in-depth look at crop insurance and the 2014 Farm Bill, read the "Growing Influence" series

“Crop insurance is vitally important to farmers,” said Doug Goehring, North Dakota Department of Agriculture commissioner. “Agriculture is one of the most important industries in the nation.”

But the program – a key topic during the 2014 Farm Bill discussions – is under attack again for being inefficient and expensive.

In a report to Congress released in March, the Government Accountability Office recommended reducing the subsidies on crop insurance premiums going to high-income farmers. Such cuts would save the federal government and taxpayers tens of millions of dollars at a time when the nation’s budgetary pressures are ever increasing, the accountability office concluded. 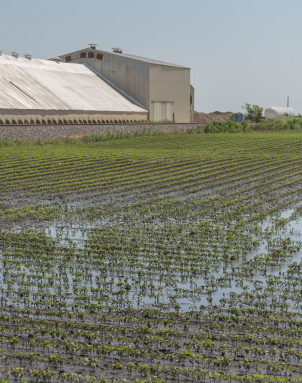 After a strong thunderstorm, water pools in a field near Fairmont, Ill., on July 1, 2014. Crop insurance can compensate farmers for crops lost due to flooding.

“Most of the detractors from current programs will not be happy until all support for agriculture is eliminated,” said Steve Pringle, associate director of government affairs for the Waco-based Texas Farm Bureau.

The reports from the accountability office followed a recent White House budget proposal that also targeted the crop insurance program for billions of dollars of cuts.

“If the public policy goal is to eliminate any support for the production of agriculture in the United States, consumers must also accept that they don’t care where the food and fiber come from,” Pringle said.

Insurance payouts are managed by 19 approved private companies, which include agribusiness giants Monsanto, John Deere and Archer Daniels Midland. The government takes on billions of dollars in costs because it subsidizes the majority of premiums and pays for all administrative expenses those companies incur.

Farmers pay 38 cents for every dollar of insurance premiums.

Taxpayer dollars make up the rest.

“As the largest producer of cotton in the United States and a major producer of wheat, corn, and sorghum, Texas farmers heavily depend on crop insurance to manage their risk,” Pringle said. “Those people that advocate for increased premiums don’t appreciate the importance of production in high-risk areas and [don’t] realize the delicate balance that has been created with the last two farm bills.”

In areas often affected by drought, freezing or flooding, the government is paying well more for crop insurance than the program is getting back from premiums, the accountability office found. That practice is neither “sustainable” nor “actuarially sound” in today’s economic climate, it reported.

The accountability office defined high-risk areas as counties that pay in the top 20 percent of premium rates. The bulk of these counties are in Texas, North Dakota and South Dakota.

A failed Texas cotton field stretches to the horizon. In addition to protecting farmers\' crops from drought, crop insurance can also protect farm income from sudden drops in market prices.

“Premium rate fairness is always a subject for debate,” said Scott VanderWal, a South Dakota soybean and corn farmer, and president of the state’s farm bureau. “Rates in South Dakota are generally at a level where farmers cannot ‘lock in’ a profit by increasing the coverage level high enough to avoid financial losses.”

The agency currently does not.

It also recommended increasing rates where necessary, but industry officials argue doing so could push farmers away from buying policies. If that happens, they say, farmers will once again become dependent on even more expensive disaster assistance programs.

In a letter, the Risk Management Agency stated it will continue to revise premium rates in an appropriate, prudent and sound manner.

“If rates get much higher, a significant number of farmers may choose to not participate in the program,” VanderWal said. “That could lead to instability in food supplies and prices.”

Slicing the wealthiest farmers’ subsidies could lead to big savings

In addition to adjusting premium rates in high-risk areas, the accountability office found that decreasing premium subsidies for the wealthiest farmers could lead to further taxpayer savings.

Unlike other USDA programs, crop insurance subsidies do not vary depending on income level. For instance, to receive certain conservation program benefits, farmers cannot have a three-year average gross income of more than $900,000.

If subsidies to wealthy farmers had been cut by 15 percent from 2009 through 2013, the government could have saved at least $70 million, the accountability office found. Furthermore, only 1 percent of crop insurance participants would have been affected by such a cut.

The Senate-passed version of the 2014 Farm Bill originally included a provision that decreased subsidies for farmers who averaged a gross income of more than $750,000 in a three-year period.

One crop insurance participant highlighted in the report insured more than 150,000 acres in multiple states each year from 2009 through 2013. The government provided that participant with $6.1 million in premium subsidies during that time, and the participant collected $4 million in claims.

Overall, most major crops are covered by crop insurance.

More than four out of every five acres of corn, soybean, wheat and cotton are insured under the federal program, USDA statistics show.

“[Crop insurance] is one of the only tools available to mitigate risk from flooding, drought, disease and pest infestations that affect quality and production,” said Goehring. “Feeding, employing and fueling our nation is done by our farm and ranch families in America.”