Brant Houston, Knight Chair in enterprising and investigative reporting at the University of Illinois at Urbana-Champaign, highlighted different tools reporters can use to cover visas and immigration earlier this month at a Midwest Center for Investigative Reporting workshop in Chicago.

The workshop, “Covering the U.S. Visa System in Your Own Backyard,” was part of a specialized reporting institute supported by the Robert R. McCormick Foundation and Poynter.

Houston’s session took place on April 11 at Columbia College. Those not at the workshop can follow some of the conservation and discussion by following the Twitter tag #InvestigateVisas.

Here are some of the key resources Houston discussed during his presentation.

By using iCert’s public jobs registry, individuals can view H-2A and H-2B visa cases by state. In other words, a reporter from Illinois can research all the different cases maintained by the Employment and Training Administration. This state list shows when the visa case was posted, its status, its employer and its work-start data.

The jobs registry tool also provides contextual information, such as the job description and pay rate. Some examples of employer and job description include: “soccer coach” for UK International Soccer Camps, “farm worker” for Tom’s Farm Market and Greenhouses, and “housekeeper” for Lake Shore Country Club.

In some cases, reporters can view relevant documents – such as job orders and certifications – as well.

Thousands of individuals each year come to work at U.S. agricultural operations under H2-A visas. Before they arrive, the migrant workers are often recruited by federally licensed labor contractors. 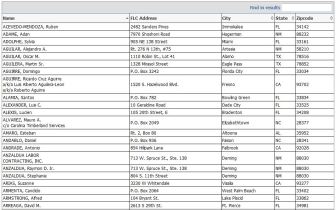 The U.S. Department of Labor’s Wage and Hour Division publishes the national list of licensed contracts online and updates it on a quarterly basis. The list contains the name and physical address for all licensed contractors.

In a separate session, migrant labor advocate Miguel Kerberlein Gutiérrez told reporters analyzing the license list with the ineligible list can lead to stories. Debarred contractors use the names of family members to secure licenses.

By using the “American fact finder” tool, reporters can learn detailed information about specific groups of people, their ancestry and where they come from. Instead of looking for a group of people, reporters can also use this tool to search for their geographic locations and learn demographic information that way, instead. 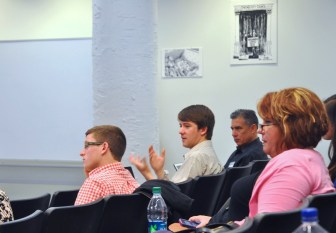 Within those two categories, there are dozens of different specific visa categories. For instance, there is the B-1 visa for athletes, the J visa for au pairs, the B-1 visa for business visitors, the A-visa for diplomats, the J-visa for exchange program visitors and the I-visa for media members.

There are dozens of different visa categories managed by multiple federal agencies. As a result, there is a seemingly infinite amount of specialized words reporters need to know to cover the system. This glossary provides definitions of those words, such as: “nonimmigrant,” “derivative,” “naturalization” and “overstay.”

The U.S. Department of State releases visa report each year. The reports provide quantitative information on how many visas were issued across a four-year period. In 2014, the annual report shows that there were 467,370 immigrant visas issued.

Houston emphasized the importance of also keeping a business mindset when investigating visa issues, and SEC.gov in a premier resource for company reports and financial filings.

By using an advanced search, reporters can search for key words.

Immigration and customs maintains a valuable set of data and documents online. 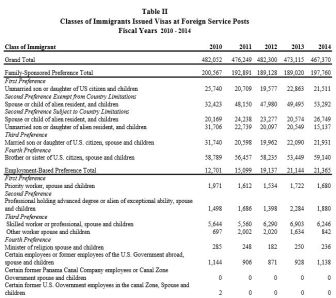 Just one example of the many federal reports released on visa statistics. Click on the image to view this report.

This report on student and exchange visitors, for instance, includes everything reporters need to know for a basic overview on F, M and J-visas. According to the report, there are nearly 100,000 F and M students in the United States, as well as about 230,000 J-1 exchange visitors.

There are also 8,976 certified schools that can accept international students.

The Government Accountability Office, the Department of Labor, the Occupational Safety and Health Administration, the Congressional Research Service, PACER, the U.S. Merit Systems Protection Board, and various inspector generals all have more information on visas, too.