The number of workers on H-2A seasonal agriculture visas increased 23 percent between 2009 and 2013.

Because of a lack of information about these jobs, workers’ chance of avoiding employer abuse is jeopardized before they even begin working.

According to a recent Government Accountability Office report, job and employer information is not publicly available, so workers and their advocates cannot verify if jobs are legitimate.

“Without accurate, accessible information about employers, recruiters and jobs during the recruitment process, potential foreign workers are unable to effectively evaluate the existence and nature of specific jobs… potentially making them more vulnerable to abuse,” the report says.

This leads to one of the major problems the Government Accountability Office report highlights – a lack of sharing of information among agencies. 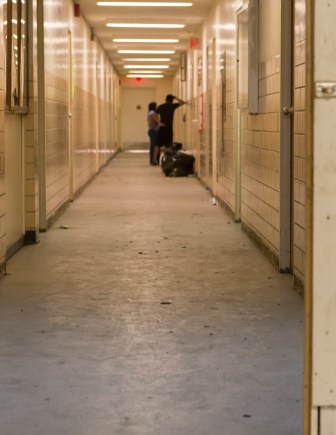 The Nightongale Camp in Rantoul, Ill., is located in an old hospital on the abandoned Chanute Air Force Base. The base was vacated in 1993.

This means, as the Government Accountability Office found, an employer who is blacklisted by one agency can still be approved by another agency.

“Officials at State’s Kentucky Consular Center (KCC) said they compare petitions that DHS approves to DOL’s public debarment list and have, in fact, found a small number of approved petitions from debarred employers,” the report says.

Information on employers are still all in paper, though there has been talk of sharing information between the Department of Homeland Security and Department of Labor electronically for two years, according to the report.

The Department of Homeland Security said its goal was to have a signed agreement to share information among agencies by fiscal year 2016.

“We stand ready to work with you to ensure enforcement of our immigration laws while also implementing critically needed reform for agricultural labor,” the Congress members wrote.

Miguel Keberlein Gutiérrez, supervisory attorney at Legal Assistance Foundation of Chicago, said at a Midwest Center for Investigative Reporting conference this month that agricultural labor could not be done in this country without recruiting outside labor.

“The crew leader or the company itself goes to the government and says ‘We can’t find enough U.S. eligible workers to do this,’” he said. “Which, in the case of agriculture and some of this work, I actually would says that’s probably true because it’s such brutal work.”