Twenty years ago, less than 10 percent of corn and soybean acres in the United States were planted with genetically engineered seeds, the type of biotechnology now commonly known as GMOs.

Farmers have rushed to adopt the engineered seeds since then, in part because of climate change concerns.

As a result, about 90 percent of all corn and soybean acres were GMOs last year, equivalent to an area larger than California.

A Midwest Center for Investigative Reporting analysis of the USDA data found that Monsanto has been responsible for introducing 37 different genetically engineered seeds approved by the USDA.

That number is about one-third of all USDA-approved GMOs. Most of those approved seeds have been for corn, soybean and cotton.

Monsanto declined direct comment for this story, but CEO Hugh Grant and fellow executives discussed the company’s role in the fight against climate change in a recent business report.

See related: "The complicated relationship between agriculture and climate change"

“Today, no single issue will impact the world and the success of our farmer customers, our partners and our company more than sustainability, which includes our ability to adapt to and mitigate the impacts of climate change,” Grant said.

Monsanto’s inventory of seeds has dwarfed its top competitors, which include businesses such as Syngenta and Pioneer, along with research institutions such as the University of Florida and Cornell.

Since 1992, data shows the USDA has approved at least 110 varieties of genetically engineered crops, including little known varieties for potatoes, tomatoes, papaya and rapeseed.

In the last five years alone, the department has approved at least 30 genetically engineered crop varieties, and it currently has six more pending deregulation.

“Planting of biotechnology traited seeds in the soybean industry has been very critical to our ability to increase production and make sure we have a high quality product,” said Ron Moore, a third-generation Illinois farmer and secretary of the board of directors for the American Soybean Association.

About three dozen groups have secured approval on genetically engineered crops, according to the USDA data.

Before a genetically engineered crop can be deregulated, it is extensively tested in field trials that require special permits and notifications.

Trials to assure experimental crops do not pose risks to the health of already approved plants can take years to complete. USDA data shows that Monsanto has also tested the most GMOs.

The company has received at least 6,700 authorized permits and notifications. In comparison, fellow international seed business Pioneer has only received a little more than 1,000.

“Sustainable intensification is the term we use to describe how today’s farmers are feeding more people with more efficient use of resources,” said Michael Louis, part of Monsanto’s sustainability team, in a statement. “One of the best ways to practice sustainable intensification is by ensuring that farmers have the best seeds possible — varieties that produce large harvests and better withstand the effects of climate change.”

In addition to USDA, the Environmental Protection Agency and Food and Drug Administration are also involved in the biotechnology deregulation process.

Despite support from Moore and other farmers who vouch for biotech’s role in the climate change battle, critics argue genetically engineered crops present health hazards to those who eat them and pesticide dangers to those who live near fields where they grow.

“When it comes to GMOs, the more we’ve looked into them throughout the years, the more concerned we’ve become,” said Patty Lovera, assistant director of the progressive-leaning consumer advocacy group Food and Water Watch.

A Monsanto facility in Jerseyville, Ill., on May 19, 2015. Data shows the St. Louis-based seed company has secured more USDA-petition approvals than any other company or institution.

According to the White House’s 2014 National Climate Assessment, average global temperatures are expected to rise between about 2 degrees and 6 degrees Fahrenheit by the mid-2000s. This rise in temperature will likely bring drought in some areas and wetter winters in others, experts say.

“Agriculture is going to be affected by climate change in a variety of ways,” said Jeff Dukes, director of the Purdue Climate Change Research Center. “Really, it’s already being affected.”

Warmer temperatures will likely create ideal conditions for diseases, insects and weeds. The tall yellow-green weed Palmer amaranth is moving north across Midwestern states at a rate by which growers say they’re alarmed. 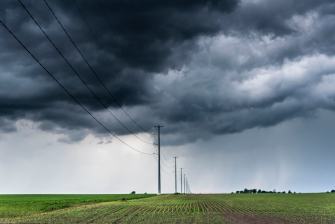 Extreme weather, such as this Midwestern summer storm, is one climate change consequence, according to experts. More weeds, insects and disease are others.

Rootworm, beetle larvae that feast on the roots of plants, is one specific pest that Monsanto is trying to help farmers avoid through its rootworm-resistant corn, which is pending USDA approval.

The rootworm-resistant crop closely follows two other Monsanto varieties of herbicide-resistant soybean and cotton that were approved earlier this year.

“That’s another wildcard, I think,” Dukes said. “Pests, disease, invasive species, weeds, insects and how they are going to change in the future.”

Of the 110 varieties of approved GMOs, more than half of them target pests through built-in resistances.

Dukes said another significant way climate change will affect agriculture is through extreme weather. Rain will fall harder, and droughts will be more frequent within individual growing seasons, he said.

“A big aspect of climate change is going to be change in extremes and not the change in the mean,” he said.

Monsanto has one variety of drought-tolerant corn, deregulated in 2011.

The U.S. agriculture industry produces nearly $330 billion per year in goods, so any negative impact on growers could result in hundreds of millions of dollars in loss.

“When it comes to GMOs, the more we’ve looked into them throughout the years, the more concerned we’ve become.” - Patty Lovera, Food and Water Watch assistant director 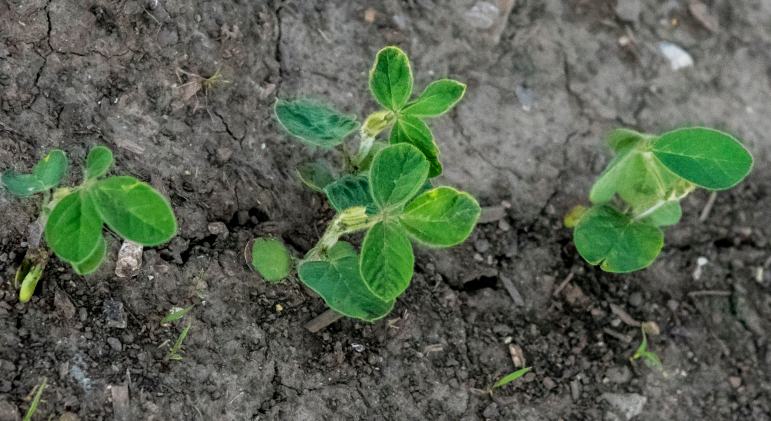 Soybeans sprout out of the dirt on an Illinois farm on May 29, 2015. Nearly every single soybean acre planted in the United States is planted with genetically engineered seeds.

Consumer groups similar to Lovera’s have widely opposed the rapid rise of GMOs.

“The GMO model doesn’t really fit into what a lot of folks say we’re going to have to do to deal with climate change,” said Lovera, whose Food and Water Watch has been following what she called the “hot topic” of biotechnology for several years. “We don’t buy that argument.”

“GMO labeling is a really important topic to consumers because it just makes sense that they should get to know this,” Lovera said. “This is a basic piece of information about how a food is produced.”

There are also at least two pieces of federal legislation connected to GMOs.

More than 60 countries require labeling of genetically engineered foods, according to the consumer advocacy group The Center for Food Safety.

The pushback has meant long wait times for growers looking to plant the next big biotech crop.

Tamara Nelson, senior director of commodities at the Illinois Farm Bureau, said the criticism and hype has caused the regulatory process to slow down.

“At the moment, our approval process for biotech crops is slower than Brazil and Canada’s, our two competitors,” Nelson said. “That is, I’m sure, not what anyone intended to happen.” 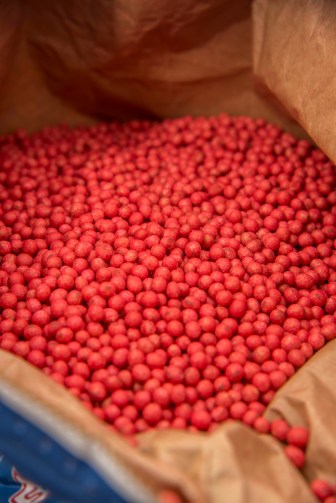 Soybean seeds left over from the 2014 growing season.

During a public comment window within that process, nearly 5,000 individuals submitted comments, many against the crops.

“It’s a bit of a challenge,” Nelson said.

She said the sheer number of biotech crops that companies are coming up with is causing a backlog, as well.

Even if it takes a little bit longer, farmers will continue to “readily adopt” new genetically engineered crops from Monsanto and other companies as long as the products are economically viable, said Moore, who added that farmers have always had to adjust to Mother Nature.

For now, though, he said that spring planting on his farm went “really well” and that he is looking forward to a “very prosperous year.”

Anybody concerned about GMOs should talk to a farmer directly, Moore said.

“We have to be proud of the fact that we raise food for people,” he said. “We have to show the consuming public why we do the things we do.”