Various studies have highlighted these and dozens of other ways the U.S. agriculture industry will likely be affected by climate change, the growing global crisis that major agribusinesses have already started to combat.

But while the agriculture industry plays victim to climate change, it is also a culprit.

Climate change is predominately caused by the buildup of atmospheric carbon dioxide and other greenhouse gases. Overall, the agriculture industry is responsible for at least 8 percent of these greenhouse gases, according to the U.S. emissions inventory. This is largely because of methane from livestock production and nitrous oxide from soil management practices.

See related: "GMOs, Monsanto and the fight against climate change"

“Really, its major impact comes in these other greenhouse gases, the methane and nitrous oxide,” said Jeff Dukes, director of the Purdue Climate Change Research Center.

The U.S. Environmental Protection Agency reported that methane is roughly 25 times more potent than carbon dioxide. That means the gas is better at absorbing energy and staying in the atmosphere longer, consequently blanketing the Earth more effectively.

“They trap heat even more effectively than carbon dioxide, and agriculture emits a lot of [the gases].” Dukes said. 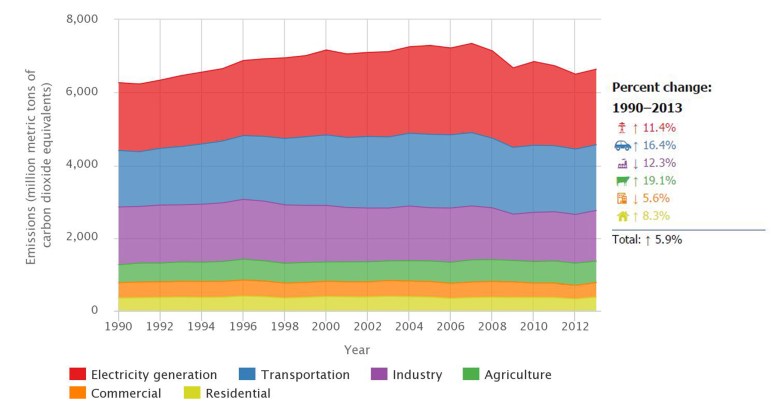 The agriculture industry as a whole is responsible for roughly 8 percent of U.S. greenhouse gas emissions. The chart above shows emissions breakdown by industry in million metric tons of carbon dioxide equivalents. Click on the image to visit the data page. The figures to the right show changes in emissions from 1990 to 2013. Colors also correspond to the chart.

Each growing season, farmers across America inject nitrogen — an essential nutrient that comes from the fertilizers used to boost plant growth — into soil. Crops absorb much of that nitrogen, but it is the portion that they do not suck up that causes greenhouse gas problems.

When farmers spread fertilizer over their acres, they fuel tiny microbes in the soil that produce nitrous oxide.

According to Dukes, farmers could minimize nitrous oxide emissions by using the right amount of fertilizer at the right time.

“To minimize the impact of climate change, basically, we can work on a couple things,” Dukes said. “One is trying to manage fertilizer use as best as possible by not applying too much and not applying it at the wrong time.”

The Climate Corporation, a data analysis company that helps farmers gather and make sense of all the information on their farms, offers a monitoring service in its Climate Pro package called Nitrogen Advisor. Using the advisor, farmers can see field-level nitrogen data by using their smartphones or laptops.

The advisor allows farmers to use custom scenarios to determine the best amount of nitrogen to apply and when to apply it.

“It’s really about helping that grower focus their attention in the fields that need it and really use his expertise and time in the most valuable way possible,” said Anthony Osborne, vice president of marketing for the Climate Corporation.

Severe weather across farmland in Champaign County, Ill., on May 30, 2015.

Besides nitrous oxide, the livestock industry creates the greenhouse gas methane, which comes from the digestive track of animals and the manure they produce. In recent years, this has become more of a problem, as livestock facilities have drastically expanded into what are now known as concentrated animal feeding operations.

By the EPA’s definition, a large livestock facility can house 1,000 or more cattle or more than 125,000 chickens.

Manure digesters, machines that collect manure and harness it into methane, now allow facilities to turn that waste into electricity.

Cargill, the largest privately held company in the United States, has started using digesters at an Idaho dairy farm. At the Bettencourt Dairy B6 Farm, the company turns manure from the farm’s 6,000 cows into 1 million kilowatt-hours of electricity per month, according to a press release.

The Wisconsin Center for Investigative Journalism reported on concentrated dairy farms and manure digesters in its state. The reports look at other environmental issues associated with industrial-scale livestock production, such as drinking water contamination.

“Our management techniques of that manure can lead to greater or lesser methane emissions,” Dukes said. “If we work on managing the manure better, we can reduce and minimize the methane emissions from livestock.”