Agribusiness giant Cargill last week released its annual corporate responsibility report, a set of goals focused on sustainability that influence how the company will operate worldwide.

The report highlighted several of Cargill’s environmentally friendly business practices, most notably the company’s commitment to ending deforestation in its supply chain, a task Cargill has been working to carry out for nearly 10 years.

Its release comes nearly three months after the company settled an antitrust lawsuit, while also fighting an ongoing lawsuit related to child slavery.

“At Cargill, we want to be the most trusted source of sustainable products and services,” said David MacLennan, the company’s president and CEO, in a press release. “Given our broad presence in food and agriculture, we know we have a fundamental responsibility for our environmental and social impact.”

The report stated “specific goals” on sustainability and environmental stewardship will be set going forward.

Among its many businesses, Cargill oversees an extensive palm oil operation throughout Indonesia and Malaysia.

In recent months, palm oil has received much attention, as the U.S. Food and Drug Administration announced it would start taking steps to remove artificial trans fats from foods in an attempt to prevent fatal heart attacks.

Used in all types of popular foods – including coffee creamer, frozen pizza and fast food – palm oil can serve as a substitute for trans fat, but its environmental costs are well-documented and steep. One expert estimates that the palm oil industry has cleared more than 30,000 square miles of rain forest.

Cargill – which partners with the World Resources Institute and works with The Forest Trust – has repeatedly made commitments to ensure the palm oil it processes, trades or produces meets high sustainability standards, the responsibility report states. As part of that plan, Cargill has worked to create a tracking system that can trace where products originate and has started using drone technology to monitor lands. 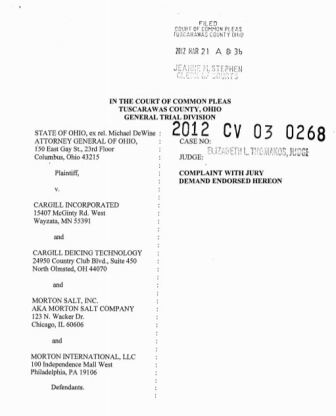 Click on the above image to read Ohio's original complaint against Cargill and Morton Salt in full.

In its official palm oil policy, Cargill also states it will not development on peat nor exploit the rights of indigenous peoples or communities.

“From our pledge to end deforestation in our supply chains to our investments in expanding capacity for food production, I believe Cargill is making a difference in global issues of important,” MacLennan said.

During the 2015 fiscal year, which runs from the beginning of June through the end of May, Cargill netted $1.58 billion, down 13 percent from the previous year, according to self-reported financial records.

This year’s gains are down even further – about 32 percent – compared to 2013 levels when Cargill earned $2.31 billion in net income.

As a privately held company, Cargill is not required to disclose financial information to the U.S. Securities and Exchange Commission.

Despite its corporate responsibility goals, Cargill was the subject of controversy in June when it agreed to settle an antitrust lawsuit over road salt prices. The Ohio attorney general’s office filed the lawsuit against Cargill and Morton Salt, accusing the companies of conspiring together for higher salt prices.

The Minneapolis Star Tribune reported that Cargill and Morton Salt settled for $11.5 million, with Cargill paying $7.7 million of that amount.

A second lawsuit targeted Cargill a year prior, as well, when three individuals sued Cargill, Archer Daniels Midland and Nestlé USA, Inc. on claims they were forced to work as child slaves.

That lawsuit is still being processed.

Cargill is based in Minnetonka, Minn., but has agricultural operations throughout the world, including facilities in Africa, Europe, Asia, South America and the Middle East. Overall, Cargill sets up shop in more than 60 countries and employs more than 153,000 workers worldwide, according to company statistics.