About 14 out of every 100 American households do not have enough food to maintain an active and healthy lifestyle, according to a U.S. Department of Agriculture food security report released earlier this month.

Nearly six out of every 100 households have so little food that they actually go hungry for parts of the year.

Overall, more than 805 million people in the world are food insecure, according to a 2014 report from the Food and Agriculture Organization of the United Nations.

U.S. Secretary of Agriculture Tom Vilsack highlighted these and other food security statistics on Thursday during a public speech that focused on the role research universities play in addressing worldwide hunger. Vilsack gave the speech at the University of Illinois at Urbana-Champaign.

“I’ve never felt hunger,” Vilsack said.  “I’ve never experienced true want, but there are millions of people who that is their daily existence.” 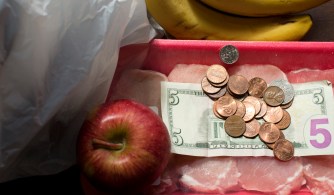 The Supplemental Nutrition Assistance Program is the country’s largest nutrition-support program, in 2013 serving about 47 million Americans at a cost of about $76 billion.

In a statement released the day before his speech, Vilsack described the USDA’s latest food security report as “a positive signal that reflects a recovering a growing economy.” Food security for American households is at its strongest since before the recession, he said.

Yet some policymakers in Washington are not convinced.

The USDA report also found that the prevalence of food insecurity did not decrease from a year earlier when the rate of U.S. households was estimated at 14.3 percent. Republican Rep. Michael Conoway from Texas said that means the “dramatic increases” in government assistance program spending were not working.

“Both the American taxpayer and program recipients deserve better than for policy makers to continue pushing forward the status quo,” said Conoway in a statement.

Food stamps and nutrition programs took up more than $756 billion of the 2014 Farm Bill, accounting for nearly 80 percent of the bill’s total expenses. The often-criticized federal crop insurance program, in comparison, only took up about 10 percent of Farm Bill spending.

The majority of nutrition spending goes to the Supplemental Nutrition and Assistance Program, commonly known as SNAP.

In addition to SNAP and other traditional nutrition programs, the USDA has implemented newer programs such as Feed the Future and the U.S. Food Waste Challenge. Feed the Future partners with farmers around the world to combat hunger by increasing agricultural productivity. The U.S. Food Waste Challenge brings together processors, manufacturers, retailers and other invested links in the U.S. food supply chain to come up with innovative ways to reduce waste. . 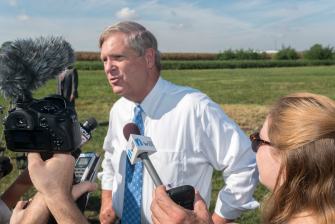 U.S. Secretary of Agriculture Tom Vilsack talks to the media on Sept. 10, 2015. He spoke from the Energy Farm near Urbana, Ill.

Both of those newer programs help create solutions for food insecurity, Vilsack said.

Although millions of Americans live in hunger, somewhere between 30 and 40 percent of the food produced in the United States is thrown out or otherwise wasted, according to USDA Economic Research Service estimates.

Next week, the USDA will announce the first-ever U.S. goal for food waste reduction.

During Vilsack’s speech, one attendee questioned how land-grant university researchers could stay optimistic when states are largely divesting in opportunities for further innovation.

Vilsack said that land grant universities needed to do a better job at sharing their research with the outside world. If they did that, the interest and support would come, he said.

Vilsack said that budget cuts make it difficult for the USDA to support land-grant research as much as it should, however.

Hunger in the United States and worldwide is also complicated by the additional challenges of a growing global population and climate change, he said, adding that there is still a lot of work left to do for universities, their researchers and their students.

But, Vilsack said, those stakeholders all have a responsibility to carry that work through.

“I’m proud of the work the USDA is doing,” he said. “And I am confident that with the great work the University of Illinois is doing and the bright students we have here and around the country and around the world, that we’ll be able to meet this challenge.”