Last year, Frida Arellano came to Arcola, Ill., from Texas with her family to find work in the area’s agricultural fields. The job left her family broke and homeless, she said.

More than 15 years ago, Daneli Rabanalez Hernandez also moved to Arcola, traveling thousands of miles with her family from their original home in Mexico. Now a student at Olivet Nazarene University, Hernandez said central Illinois has become her true home.

“When they had [my brother and me], my parents realized that they wanted us to have an education, and the United States was a place where we could obtain that, and where we actually had a chance for a better life,” Hernandez said. “We say it all the time – and I think maybe people think it’s a cliché or it’s cheesy – but that really is the reason why we came, to have a chance at a better life.” 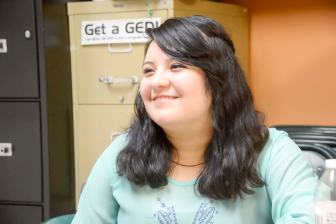 Frida Arellano talks about her journey to central Illinois on Sept. 14, 2015. Arellano, who ended up broke and homeless for a time, said she would not have made the trip to Illinois if given a second chance.

Arellano and Hernandez spoke about their contrasting experiences in an oral history aired during a public discussion in late September, “The Long Journey Home: The Story of Latino Migration into Central Illinois.”

More than 60 community members attended the discussion, which was the second installment of the Illinois Humanities’ series: “Latino Americans: 500 Years of History.”

Illinois Humanities also partnered with CU-CitizenAccess.org, The Midwest Center for Investigative Reporting, Illinois Public Media and the University of Illinois College of Media to host the two-hour event, which took place at the Spurlock Museum in Urbana, Ill.

“It was hard,” Arellano said. “We felt a little forced at being here because we had no means to go back. We had no money. We had nothing.”

Arellano and Rabanalez were among a group of four individuals who gave the first-hand accounts of the struggles Latinos face while adjusting to central Illinois life.

Arturo Montelongo told of his work from one low-paying job to another since moving from Mexico, while Magaly Avila talked about her transition from working as a migrant worker to pursuing a career in criminal justice.

The Latino population in central Illinois – across a 16-county region that includes Champaign County – grew by nearly 80 percent between 2000 and 2010. Some of that growth is attributed to the influx of seasonal agricultural laborers who come to the area during each growing season.

“The cost of reasonably-priced food in this country is coming on the backs of people treated like slaves,” said Miguel Keberlein Gutierrez, an attorney and director of Immigrants and Workers’ Rights Practice Group. 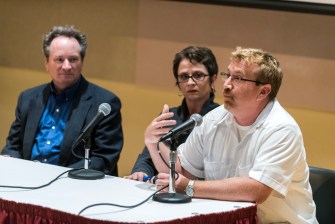 Keberlein Gutierrez was part of a discussion panel that also featured Angela Wiley, a University of Illinois at Urbana-Champaign professor in human and community development, and Tim Flavin, the director of the Mi Raza community center in Arcola.

Together, the panel shed light on the issues they see in their daily work.

“One thing I learned very quickly as an extension specialist is we were doing very little to meet the needs of the Latino community in Illinois,” Wiley said. “At most, we would have an occasional translation, and a very rough one at that.”

Flavin said that Arcola’s population of Latino residents has helped it thrive despite the fact other small rural towns around the country are dwindling.

“The Latino population, for us, is really vibrant. It’s young, and it’s keeping the community alive,” Flavin said. “You see a lot of small communities around that are basically shriveling up on the vine where Arcola is the exact opposite.”

The panel took a wide range of questions from the audience during the event. Some of the questions focused on U.S. policy, visa programs and immigration regulation, while others touched on the pressures that cause immigrants to leave their home countries in the first place.

Houston is also a co-founder and director of the regional news site, CU-CitizenAccess.org.

Local news coverage of the issues facing Latino communities has ranged across issues from migrant camps to bilingual education in local classrooms.

Other media coverage on the Latino migration has included a special project by CU-CitizenAccess.org and Hoy Chicago. The 2012 series “Midwest Chronicles” looked at the changing demographics of once predominately white central Illinois communities that were becoming more Latino, Asian and Black.

The Midwest Center for Investigative Reporting article “Road to Rantoul” described the living conditions and experiences of the Nightingale Camp residents. The camp, located at a former hospital on the abandoned Chanute Airforce Base in Rantoul, Ill., is used to house workers who work in detasseling.

The Midwest Center for Investigative Reporting is currently working on an investigation that details camp housing violations across a five states, as well. 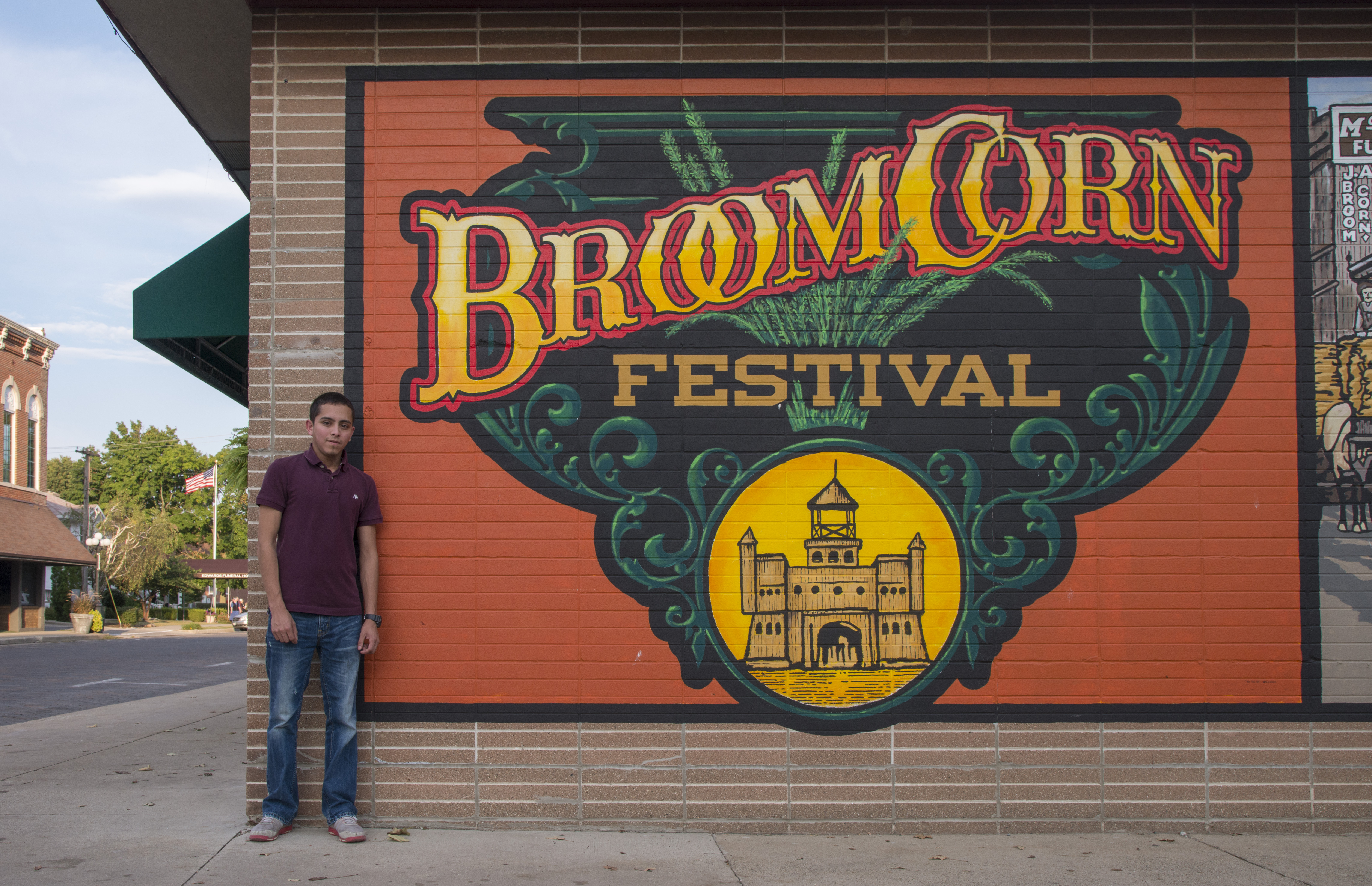 Arturo Montelongo stands near a festival advertisement in Arcola, Ill., on Sept. 17, 2015. Montelongo also spoke about his journey to central Illinois during the Long Journey Home event. 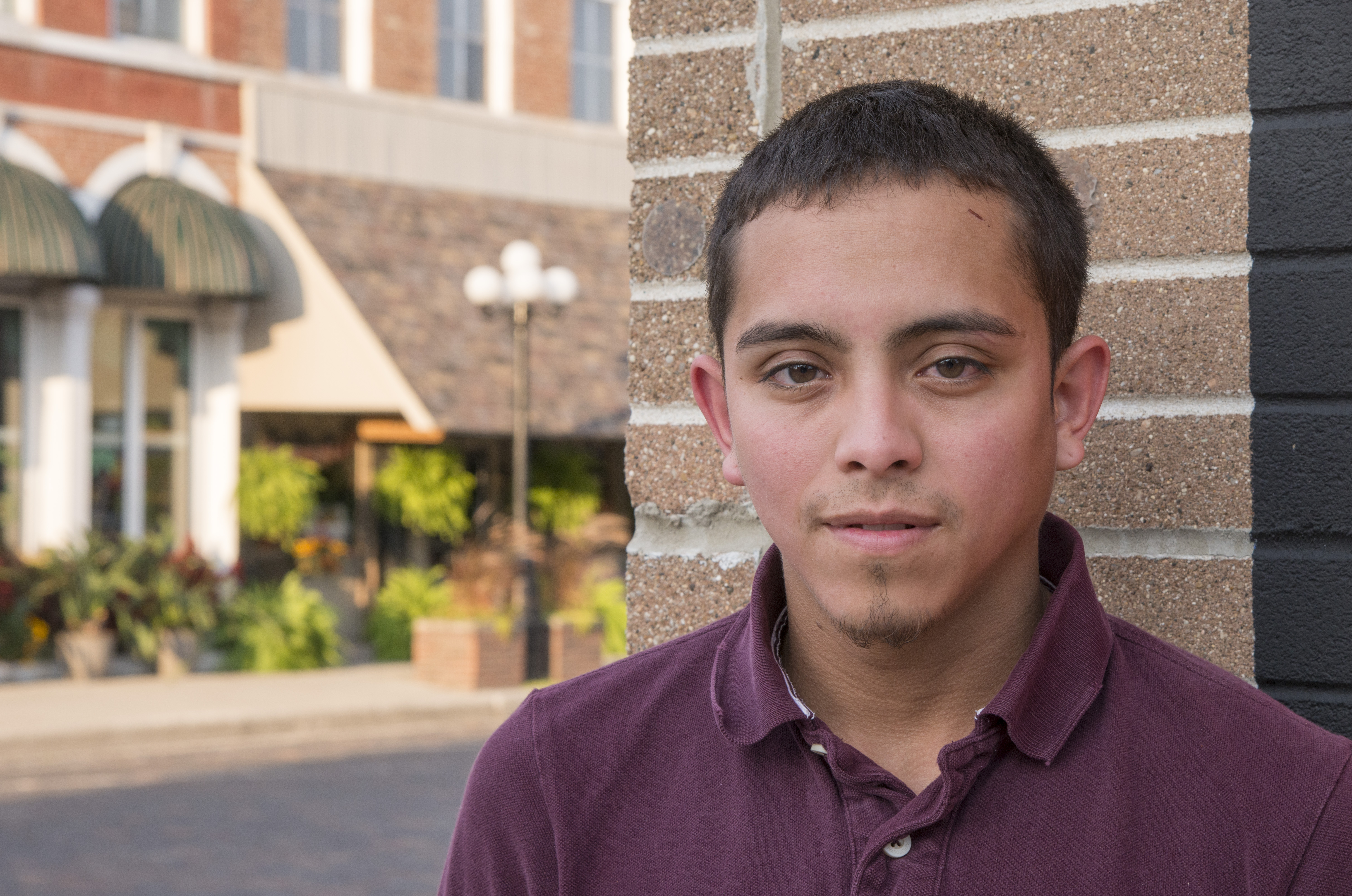 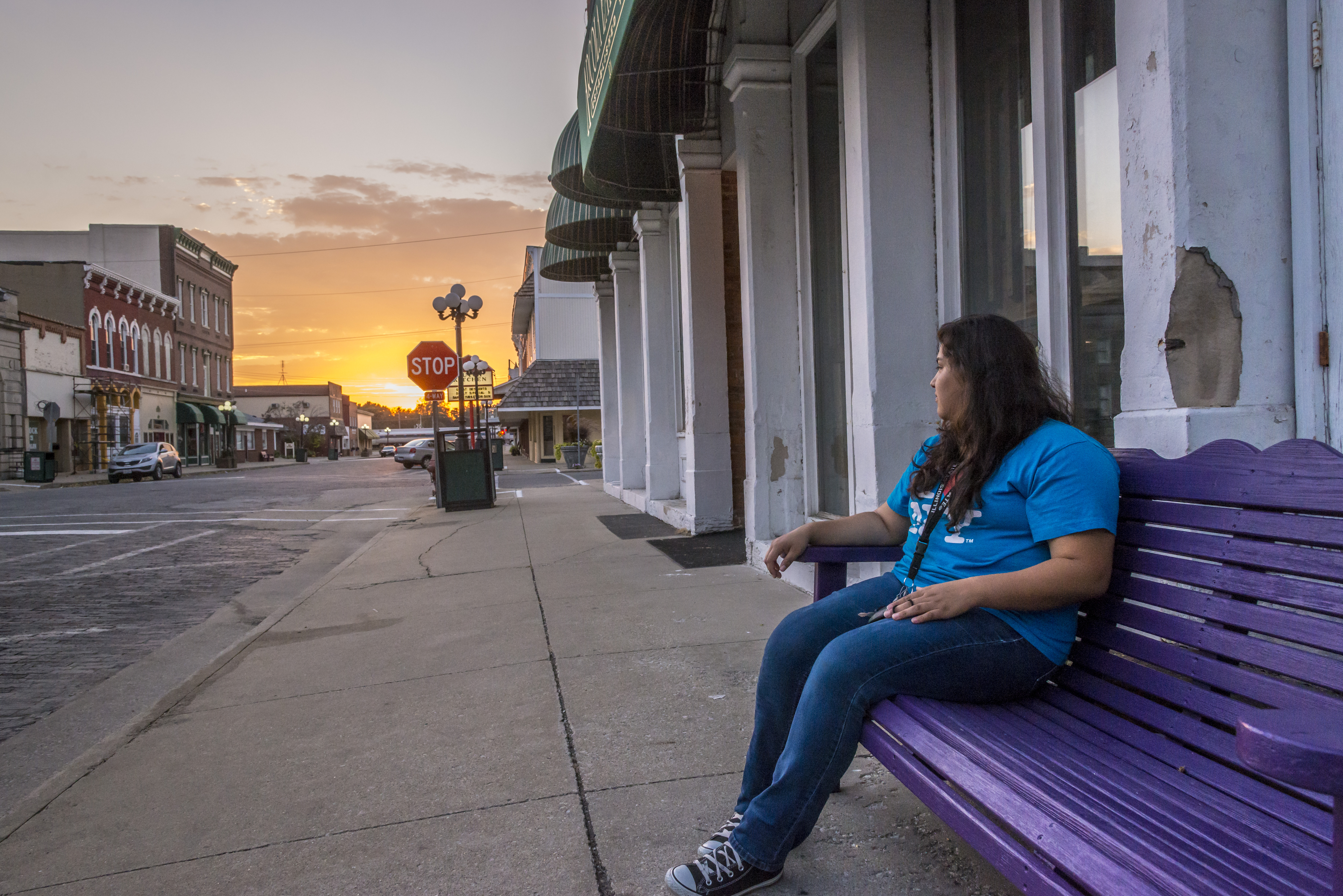 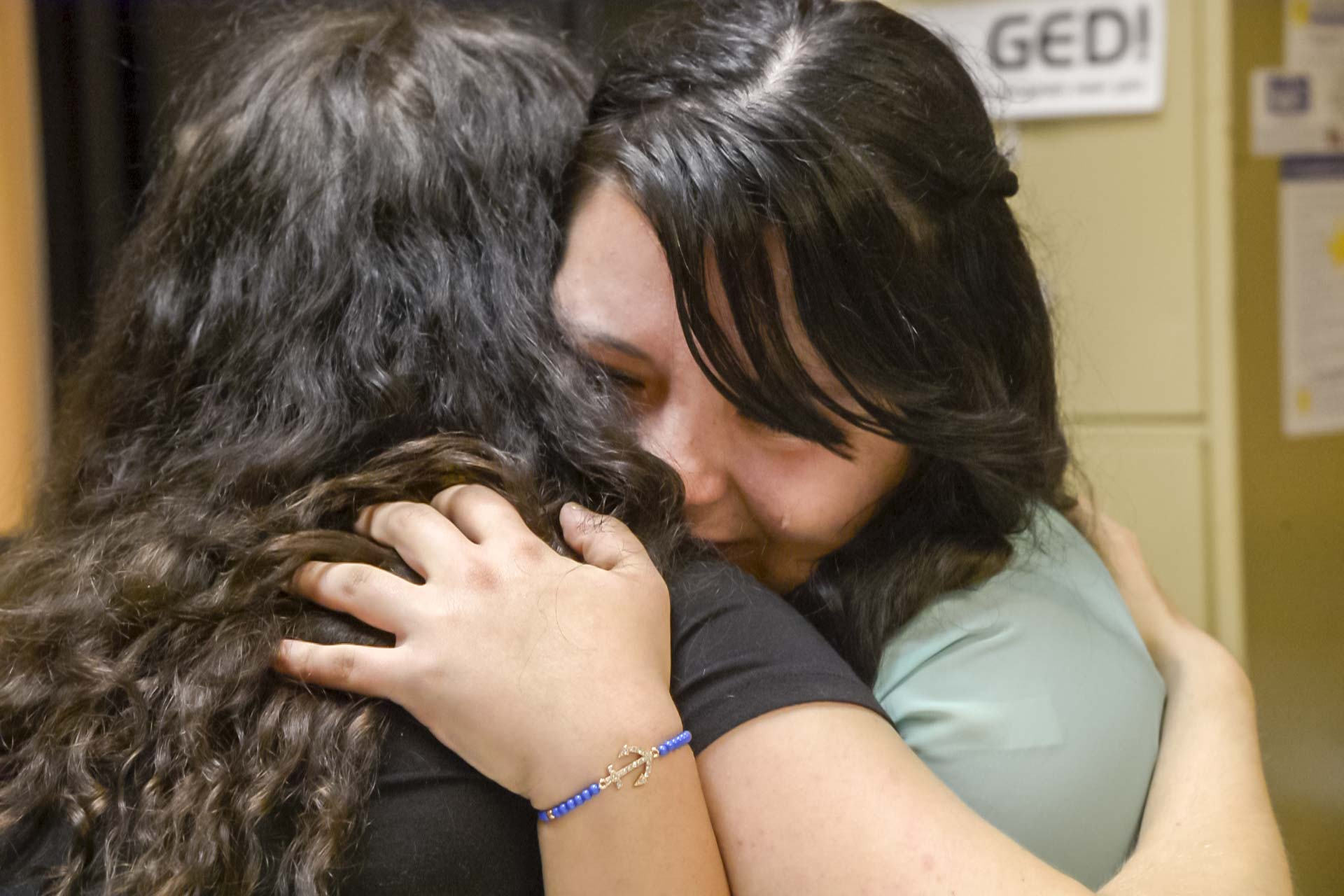 Frida Arellano hugs a reporter during an interview on Sept. 14, 2015. 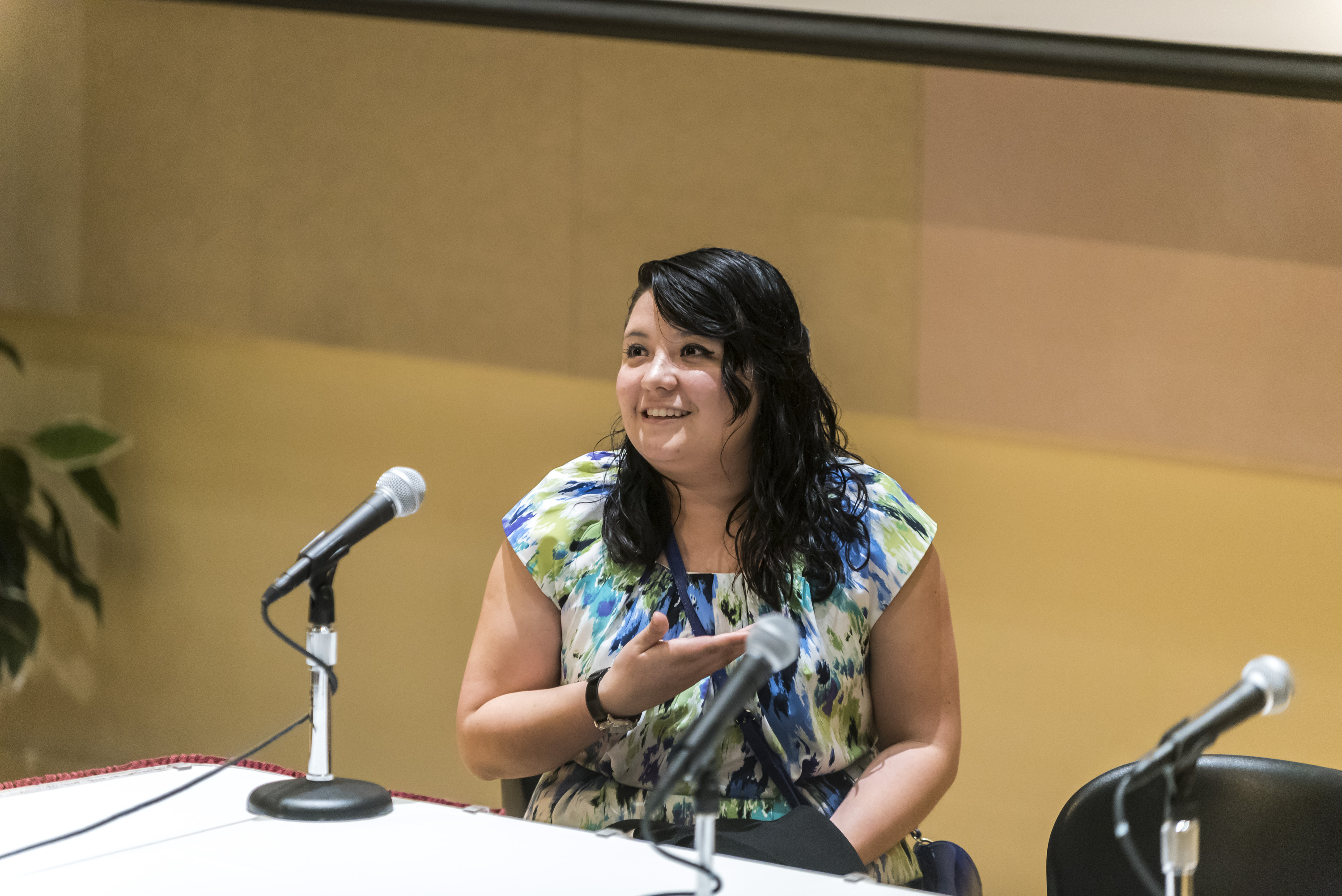 Frida Arellano answers a question asked by an audience member during the Long Journey Home event held at the Spurlock Museum in Urbana, Ill., on Sept. 29, 2015. More than 60 community members attended the event. 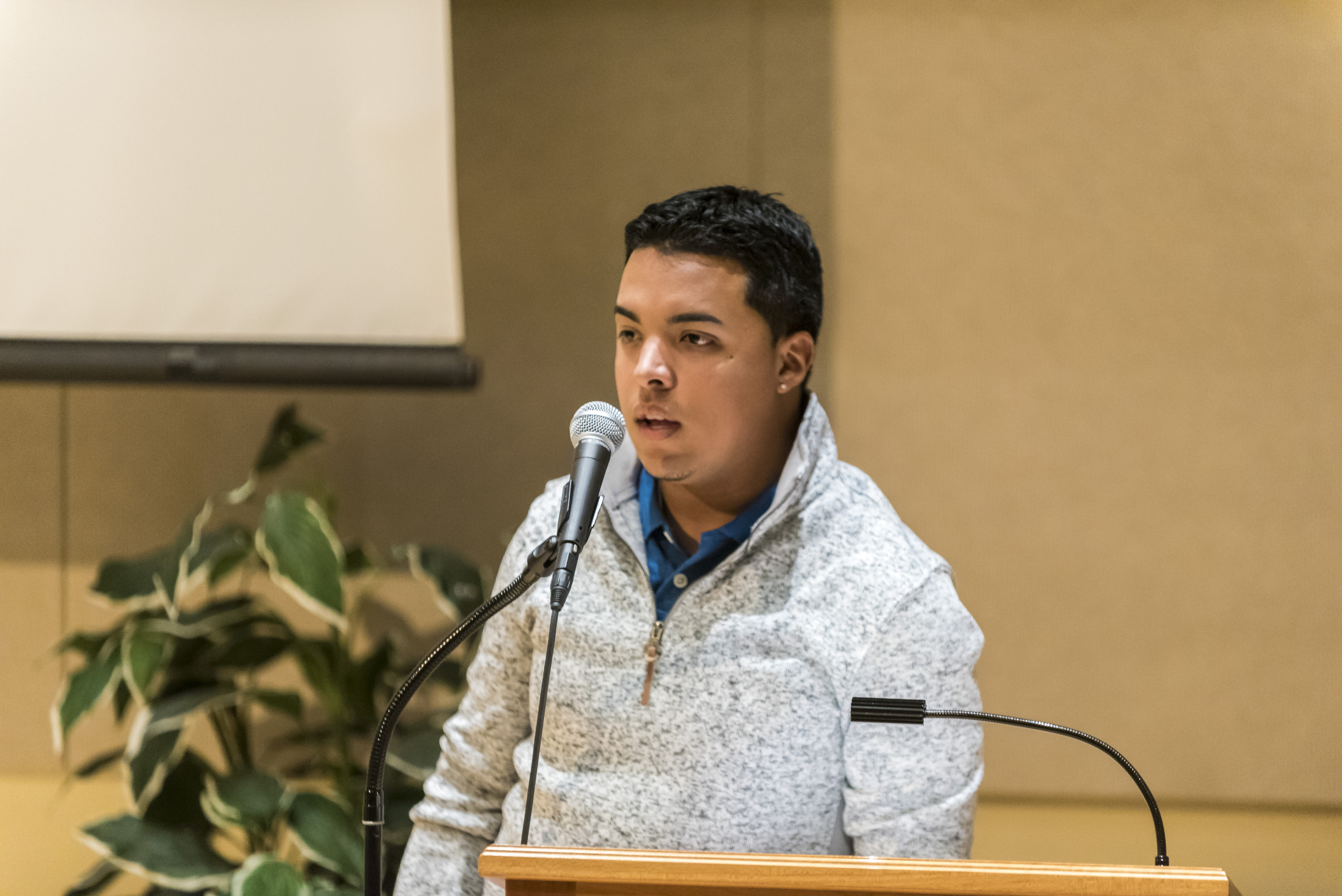 Sam Vega produced the documentary film "La Espiga." He talked about the film at the Long Journey Home event on Sept. 29, 2015. 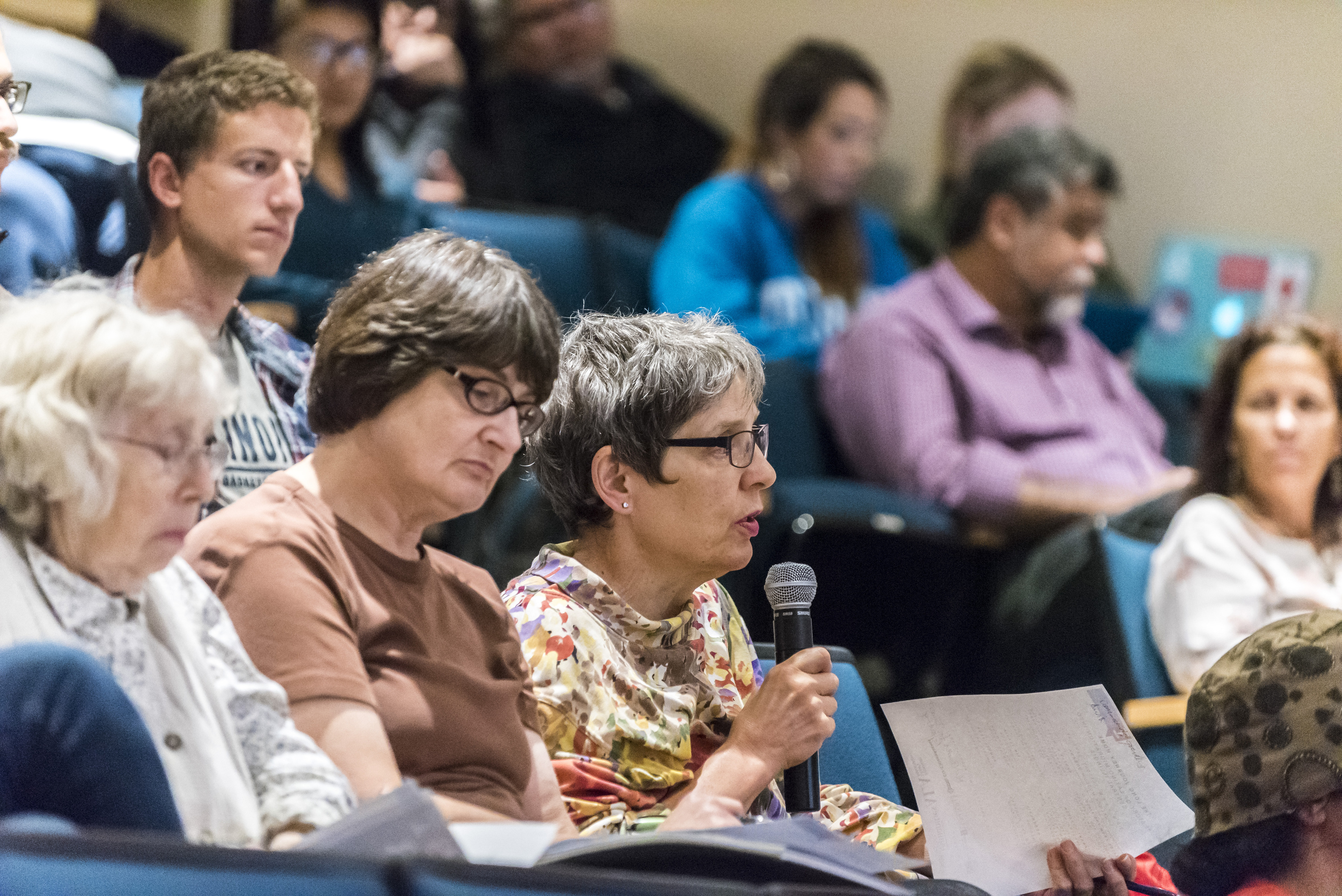 An audience member asked the panelist a question during the Long Journey Home event on Sept. 29, 2015. 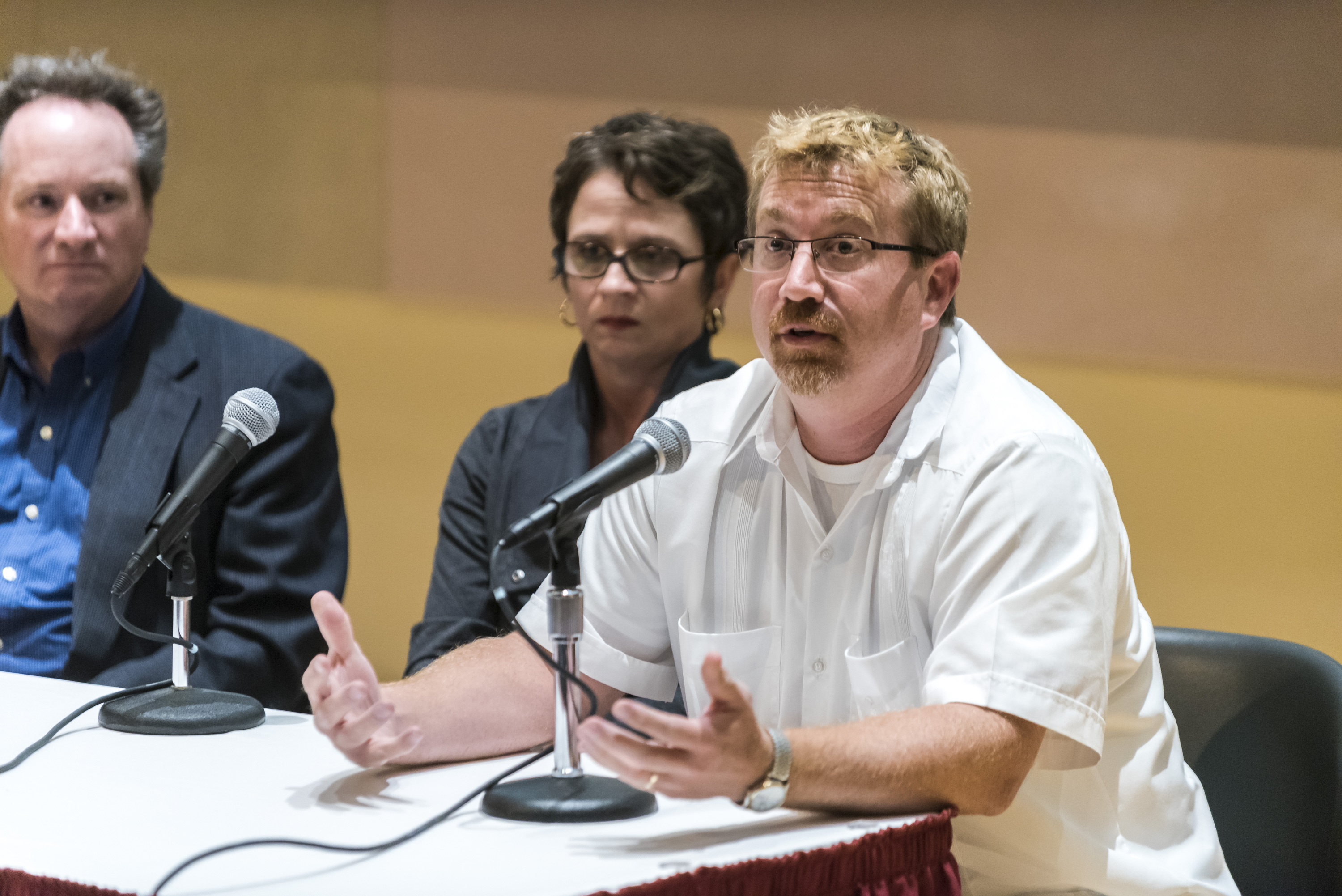 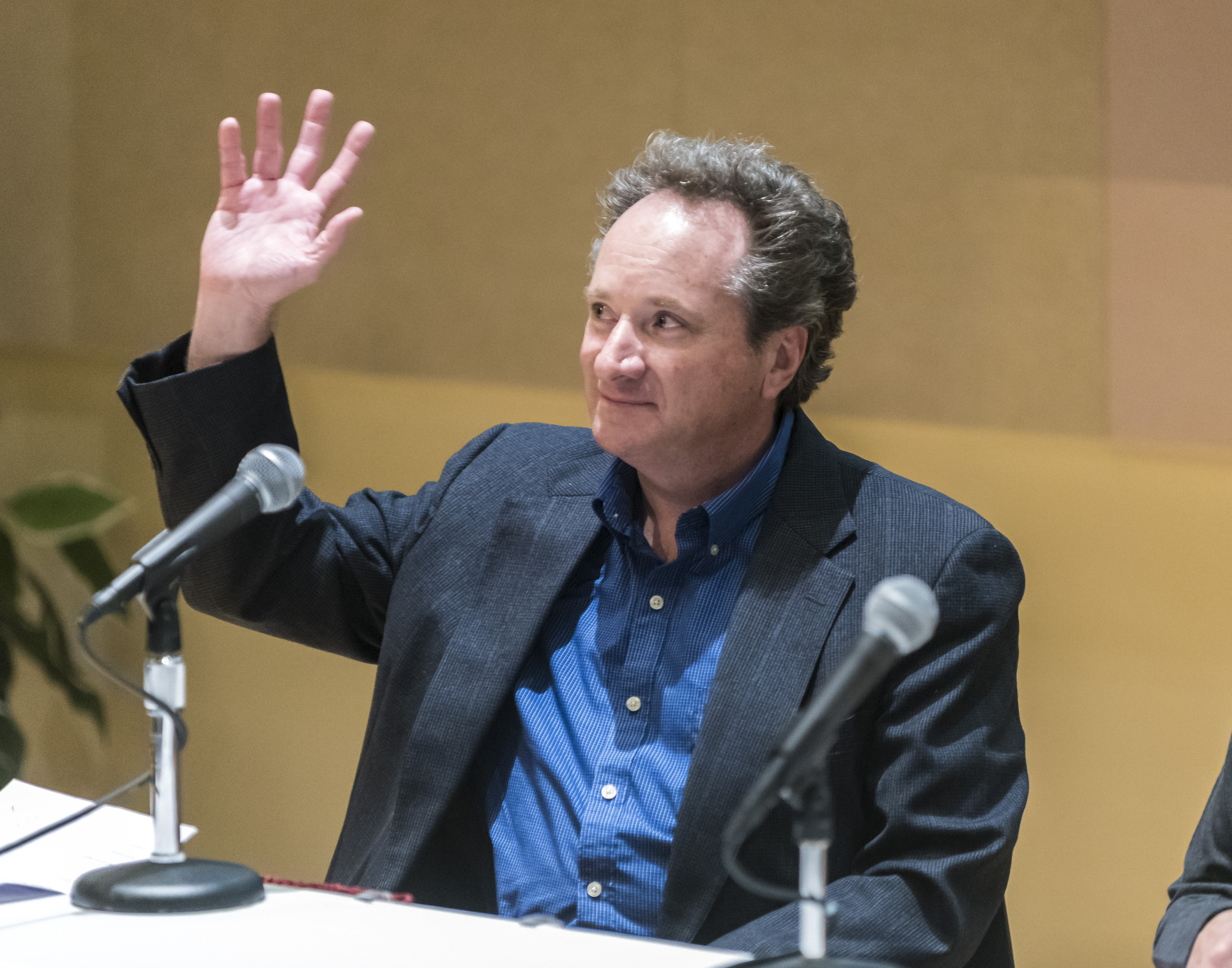 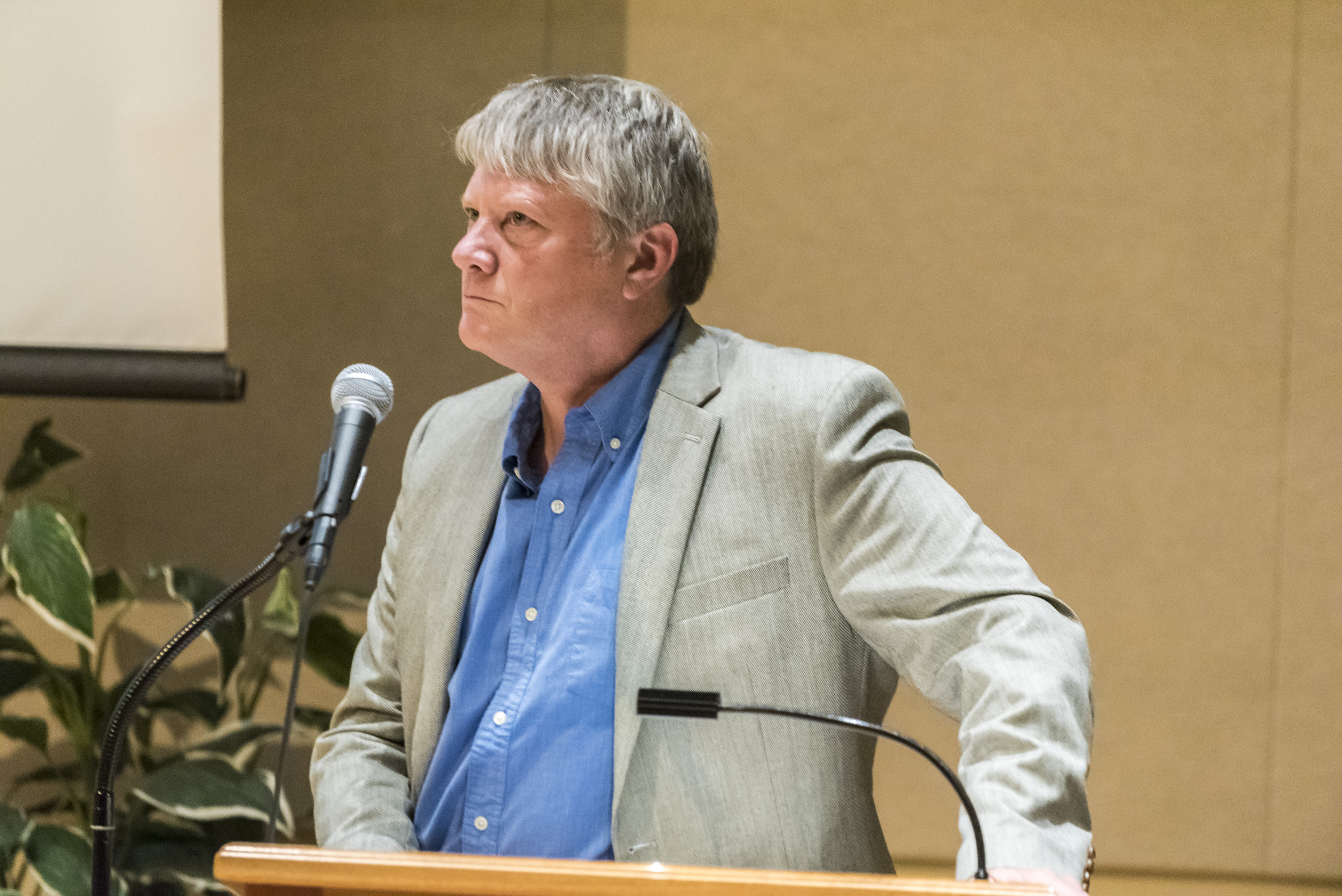 For more on “The Long Journey Home,” listen to:

This Illinois Humanities program is supported, in part, by a competitive Latino Americans: 500 Years of History grant from the National Endowment for the Humanities (NEH) and the American Library Association (ALA). This second installment of a six-part series about the past, present, and future of Latinos in the United States is presented in partnership with the Department of Journalism at the University of Illinois in Urbana-Champaign, the Midwest Center for Investigative Reporting, and Illinois Public Media.