In the United States, billions upon billions of dollars go to some of the largest companies in the form of tax breaks, subsidies, loans, grants and other financial bailout packages.

Those who are critical of the waves of cash flowing to corporate America call this “corporate welfare.”

In May, the Midwest Center for Investigative Reporting took a look at some of the top agribusiness companies in order to see how much money they were getting in corporate welfare. Among its findings, the analysis revealed that seven companies received more than $596 million in financial backing from state and local agencies throughout the past few decades.

On a federal level, those seven companies received at least $18.5 billion since 2000.

“Corporate welfare is rampant,” said Josh Sewell, a senior policy analyst with Taxpayers for Common Sense, in the May story. “It’s troubling.”

Below, find four essential tools and resources for reporters digging into corporate welfare.

This publicly accessible, searchable website is mandated by the Federal Funding Accountability and Transparency Act of 2006.

It has sortable data on federal contracts, grants, loans and other forms of financial assistance.

Reporters can use this tool is to easily search for specific recipients, including businesses and institutions. After entering a recipient name, reporters can view the total number of transactions that entity has received and see how much money it has banked. Results are further broken down by the type of transaction.

Here’s one example of results searching by recipient name, in this case “Cargill.”

A screen grab from the U.S. spending tool. As shown in the image, this tool helps reporters view federal contract, grant and loan information. Its summary feature puts key information in one convenient spot.

The tool shows that Cargill has received 75 total transactions on a federal level.

Those transactions, mostly contracts, are valued at more than $20 million.

Below the search summary, reporters can see a list of individual files for more detailed information.

In addition to search by recipient name, reporters can also search by location, such as a particular state or even zip code. Clicking on a state in the map found on the home screen narrows results to that state, taking the viewer to a new screen. From there, results can be further filtered down by county, funding level, type of funding and more.

A screen grab of the U.S. spending tool. The tool also allows reporters to search financial information by geographic location.

Pulling up Illinois brings up information on more than 100,000 transactions valued at more than $56 billion.

Only searching for grants worth between $5 million and $500 million brings fewer than 300 examples.

This website can be a key starting point for reporters looking to report on corporate welfare.

It provides a helpful glossary defining tax terms, too.

As the first national search engine for economic development subsidies and other forms of government financial assistance, Subsidy Tracker 3.0 is one of the most comprehensive analysis tools on corporate welfare available.

It maintains a database of more than 450,000 different subsidies and awards issued from more than 718 programs.

Overall, it includes data on more than 1,800 companies.

Reporters can use the tool in several ways, including searching by parent company or subsidy source. Those looking to get very specific filter by level of government and subsidy value, as well.

A screen grab of the Good Jobs First subsidy tool.

A search for “Monsanto” under “Parent Company Pages” shows that the seed company has received 56 total subsidies worth a combined total of more than $142 million.

Below the search summary, reporters can find information on particular awards and download a CSV or XML file.

It seeks to promote corporate and government accountability.

Your state’s department of commerce or economic development board

Each state typically has a department of commerce or economic development board that oversees state-level grants, tax breaks, loans and other subsidies.

In many cases, these agencies maintain electric databases that detail where money is going. 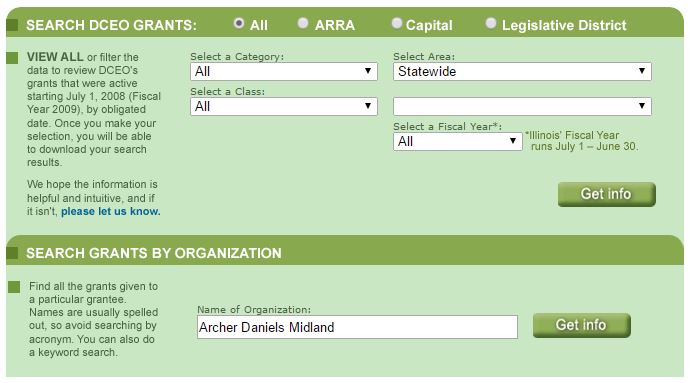 A screen shot from the Illinois Department of Commerce and Economic Opportunity website.

In Illinois, that agency is the Illinois Department of Commerce & Economic Opportunity. Its online service for looking up state-distributed grants is called Grant Tracker, which is searchable by area, company and grant class.

If a state does not post data online, reporters should still be able to obtain information by submitting an open records request.

Subsidy Tracker has information on state-level subsidies, as well.

As always, the Government Accountability Office is a valuable tool for looking up federal reports that show how the system is broken.

When it comes to corporate welfare, the office has several reports on the failures of tax breaks, rebate programs and other subsidies

Here are just a few to get you started: