If approved, the Trans-Pacific Partnership will create a multinational working group on biotechnology regulation and establish a new system to resolve disputes between governments and foreign corporations.

The Trans-Pacific Partnership is a major free trade agreement between the United States and 11 other countries that seek to foster international trade by lowering policy and regulation barriers.

Its 30 chapters touch on everything from market access, rules-of-origin labeling and sanitary measures to investment, financial services and intellectual property. Reached on Oct. 5 in Atlanta, the deal’s full text was released on Nov. 5.

One of the most pressing challenges facing modern agriculture is the patchwork of different GMO rules in different countries, according to industry officials.

“The toughest things that we’re dealing with right now aren’t necessarily associated with tariffs,” said Rodney Weinzierl, executive director of the Illinois Corn Growers Association. “They’re a lot around the technology we use, biotechnology.”

The deal stipulates that each partner “allow year-young submission and review of applications” and “increase communications” to “improve global information exchange.”

As part of the agreement, TPP members are also required to establish a working group for “modern biotechnology” products under the deal’s Committee on Agricultural Trade. The purpose of the working group is to strengthen “information exchange and cooperation on trade-related matters” that include biotechnology products and GMOs.

Devry Boughner Vorwerk, vice president of corporate affairs for the Minnesota-based agribusiness giant Cargill, said Cargill has supported the Trans-Pacific Partnership from its very start. Records show that support even included her testimony to a U.S. House of Representatives’ subcommittee on trade in December 2011.

“The agriculture biotechnology working group set up in the TPP is meant to continue to address those potential trade barriers that exist for biotech products, which we see as a positive,” Vorwerk said. “The countries can continue to come together over the course of time to discuss best practices.”

The agreement would not force countries to adopt or modify laws, regulations or policies for the control of biotechnology within their borders.

In 2013, China rejected shipments of U.S. corn that included a genetically engineered trait the country had not yet approved. Industry studies estimated the rejection cost the U.S. corn industry as much as $3 billion.

So far, China is not part of the Trans-Pacific Partnership, but some of its neighbors are.

Japan, Mexico, Canada, Brunei, Malaysia, Australia, New Zealand, Chile, Peru, Singapore and Vietnam are members of the deal, the biggest the United States has been a part of since the 1990s.

Each country has its own process for approving new types of GMOs.

The United States uses the 1986 coordinated framework of biotechnology, which is split between the U.S. Department of Agriculture, the Environmental Protection Agency and the Food and Drug Administration.

In Canada, GMO regulation is overseen by the Canadian Food Inspection Agency.

In Japan, it’s broken up between at least four different national ministries including the Ministry of Agriculture, Forestry and Fisheries, as well as the Ministry of Economy, Trade and Industry.

Some countries’ approval processes are stricter than others and may take longer to finalize.

That can be a roadblock for major biotechnology companies such as Monsanto, which often promises not to release new products until it has received regulatory approval in all major export markets.

Monsanto declined to comment on the deal until it reviewed its details.

The USDA has approved more than 110 varieties of GMOs, including one Monsanto corn product approved in October engineered to resistant the pest rootworm and tolerate the herbicide glyphosate.

“As you know, technology is not static,” Vorwerk said. “There’s always something new, something better that continues to be introduced, and so having a commitment where countries can sit down and talk about those issues ahead of time and maybe reach a consensus is really important.” 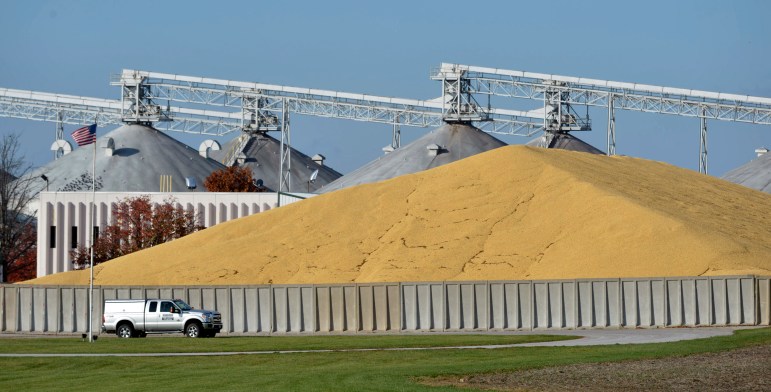 Grain stored outside after harvest at the Andersons facility near Champaign, Ill., on Nov. 6, 2015. According to the U.S. Department of Agriculture, 2013, 2014 and 2015 have all been among the top harvest years on record.

Those against the Trans-Pacific Partnership argue it is a secretive agreement made behind closed doors and backed by the world’s most powerful corporations.

Some critics oppose the deal because of the likelihood of sending jobs abroad. Others are against it because of concerns related to expanding foreign food imports when the United States already has an overburdened federal inspection system.

“[The deal] sets up a dispute resolution system that will allow corporations to file suits against government in foreign countries any time countries impose regulations that can be construed as imposing a cost or potential loss of profit on those businesses,” said Robert Scott, director of trade and manufacturing policy research with the Economic Policy Institute.

That means if a country that signed onto the deal stopped U.S. corn shipments China did in 2013, American businesses could effectively take that country to international court.

The idea of investor-state dispute settlement systems is not new.

An analysis by the non-profit German political foundation Friedrich Ebert Stiftung found that there have been at least 568 cases worldwide since 1995.

Since 2010, the big-tobacco corporation Phillip Morris has been suing Uruguay and Australia for implementing plain packaging initiatives that discourage smoking.

Since 2012, the pharmaceutical company Eli Lilly has been seeking damages against Canada for voiding two patents in Canadian court.

“We have situations that are rife with potential conflict of interests that are built into the core of this agreement,” Scott said. “The thing that’s important to understand about these so-called dispute settlement panels is they operate outside of the normal channels of the law.”

“Sometimes, as commercial players, we’re left in the dark and there’s not a commitment from that government to communicate with us,” she said. “This will speed up resolution of disputes, and it will allow for the products to move much more swiftly.”