A third of the toxic air releases by power plants and factories come from just 100 facilities, a new investigation by the Center for Public Integrity has found.

The investigation dubbed the top 100 emitters as "America's super polluters" and showed that these facilities, largely coal plants, have a negative impact on human health and climate change. 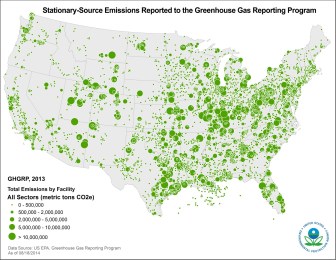 Have you ever wondered where #GreenhouseGas (GHG) emissions in the United States come from? We just released GHG emissions data from 8,000 large industrial facilities across the nation. Explore our interactive map tool to learn about emission where you live. #ClimateChange ghgdata.epa.gov/ghgp/main.do

According to the story, the EPA has said that it is focusing its efforts on these super polluters, though 27 states are suing the EPA over the Clean Power Plan, which requires states to reduce carbon pollution from power plants.

In order to get a comprehensive look at this issue, the Center for Public Integrity combined two EPA databases from 2010-2014 - the Toxic Release Inventory and the Greenhouse Gas Reporting Program. This was something that the EPA itself had looked at doing, but found it to be too complicated.

Additionally, the EPA released the 2015 data from the Greenhouse Gas Reporting Program this week, which showed a 4.9 percent decrease in direct emissions.

The story is the first in the "Carbon Wars" series by the center, which has pledged to continue reporting on the impacts of fossil fuels.