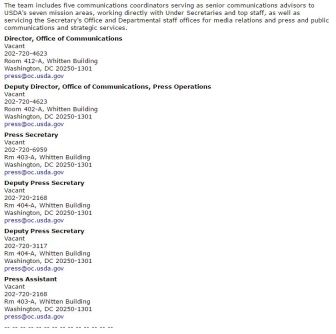 The USDA media page listed all press positions as vacant on Tuesday.

Reuters is now reporting that the USDA is disavowing the gag-order email sent to ARS employees.

Federal government officials are no longer allowed to communicate with the public and media about certain environmental issues per orders from the Trump administration, multiple news outlets reported Monday and Tuesday.

TheHuffington Post reported Monday night that the Environmental Protection Agency had frozen its grant program and told employees not to talk about it to anyone outside the agency.

Then, the Associated Press confirmed Huffington Post's report and went a step further - the administration had ordered a blackout of all media by the EPA.

The ARS is the USDA's "chief scientific in-house research agency" and employs more than 2,000 scientists with an annual budget of $1.1 billion. This data is used by researchers, farmers and journalists. A researcher who frequently works with ARS told Harvest Public Media that this data is essential to his work.