This reporting was done in partnership with Flatland, the digital magazine of Kansas City PBS. Find all of the stories here.

A complex system of federal and state tax credits has played a key role in the development of wind farms across the United States, with billions of dollars of support going to foreign and U.S. energy companies.

In fact, wind energy companies are the largest recipient of federal energy subsidies, making up 37 percent of subsidies in 2013, according to the U.S. Energy Information Administration.

From 2016 to 2020, the federal government is projected to lose $23.7 billion in tax revenue through the wind production tax credit, according to a 2017 report by the Congressional Joint Committee on Taxation.

Nonetheless, the incentives have been effective, adding an annual average of 1.4 gigawatt hours of energy, according to research from Stanford University, which reviewed two decades of federal tax credit data and the growth of wind energy. The research found that when the credit lapsed, so did construction of new turbines.

The credits have been significant because wind turbine companies generate revenue in three main ways:

Federal incentives make up about a third of each project’s cost, Loomis said.

While the federal production tax credit is currently in the process of being phased out over the next five years, researchers say it has produced numerous jobs and billions to the economy. 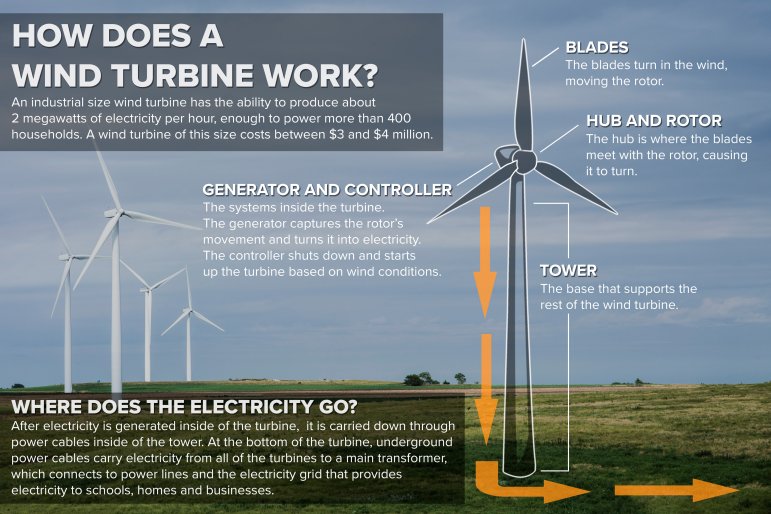 Produced by Flatland and the Midwest Center for Investigative Reporting

Kevin Steinberger, a policy analyst at the Natural Resources Defense Council, found that these credits added 22,000 jobs and $23 billion to the economy in 2017 alone.

Although federal and state tax incentives make a large difference in making wind energy profitable, the role that property taxes play in decision-making is less clear.

The wind industry touts the benefits of construction jobs and increased property tax values, but inconsistencies in how wind turbines are assessed for property taxes make the impact of wind turbines on local tax coffers difficult to determine.

Most states have a system that varies from assessor to assessor, making the tax burden unclear, particularly before the turbines are installed.

“Whenever you’re part of an industry that builds things, you run into all kinds of variations,” said Peter Kelley, spokesman for the American Wind Energy Association. “Yes, it’s a challenge to navigate all different rules that states and counties have all across America, in all kinds of areas, you’re citing one example of differing policies in regards to local tax payments, but there are many, many different policies that vary.”

School districts are the largest recipients of property taxes. More than 99 percent of wind turbines are in rural areas, where school districts have been stressed by the decline in rural America.

“We’re keeping our end of the bargain in creating economic activity in areas that need economic activity. There are benefits that flow throughout the rural economy,” Kelley said. “Local schools, ambulances, medical clinics and roads departments are all benefiting from increased resources, so even people who aren’t hosting the turbines benefit.”

The systems that states use to attract wind farms vary significantly.

So far, Iowa and Oklahoma, which lead the way in subsidies, are also set to receive the most income from property taxes by 2020, according to a report commissioned by the American Wind Energy Association.