China imported more than $130 billion in U.S. commodities in 2017, according to U.S. Import and Export Merchandise trade statistics.

The actions have yet to be finalized and a U.S. hearing on the tariffs is scheduled for May 15. [Public comment is accepted through May 11. Find more information here.]

Here’s a look at what farm organizations in the Midwest have to say. 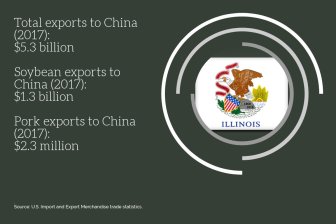 “Illinois Farm Bureau and its members are very concerned about the escalating tariff  dispute with China and its potential to devastate the farm economy. The rhetoric and threats must stop! Recent market volatility has already adversely affected farmers – who are already suffering their fifth straight year of economic decline. (Illinois Farm Bureau) and its farmers have worked diligently over the past 20 years to develop agricultural markets in China via farmer visit to China as well as by hosting Chinese buyers, scientists, and government leaders. China is consistently one of Illinois' top three markets for agricultural exports; our number one soybean market and a key market for our pork, corn, and beef exports. Illinois exports of those products to China supports approximately 150,000 jobs in Illinois.” 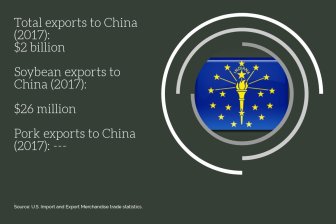 “The impacts of the proposed tariffs from China could be detrimental to U.S. and Indiana agriculture. Farmers in Indiana and across the country have worked hard to provide a reliable, quality product to our export partners. Replacing a market as large as China will not be an easy task and family farmers will likely suffer if the tariffs are imposed. We’re already in a tight farm economy since there is a surplus of grains in the market, and these tariffs will likely lower commodity prices even further.” 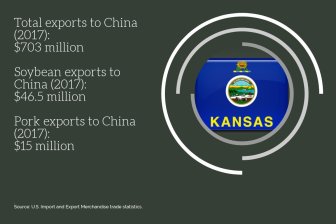 Kansas farmers and ranchers depend on market access for our exports around the globe. Kansas Farm Bureau voiced concern about retaliation when the Trump administration announced new tariffs on steel and aluminum and continue to watch developments closely.

The retaliation by China against the proposed tariffs will result in drastic impacts on Kansas markets for beef, pork, soybeans, sorghum and airplanes. Many of these products already face tariffs and will now be subject to additional surcharges of 15 to 25 percent.

Farmers and ranchers are, by necessity, patient and optimistic, says Kansas Farm Bureau President Richard Felts who farms in Montgomery County. Markets ebb and flow but China’s threatened retaliation against the U.S. tariff proposal is testing both the patience and optimism of families who are facing the worst agricultural economy in 16 years. This must stop.

“Growing trade disputes have placed farmers and ranchers in a precarious position,” Felts said. “We have bills to pay and debts we must settle and cannot afford to lose any market. We urge the United States and China to return to negotiations and produce an agreement that serves the interests of the world’s two largest economies.” 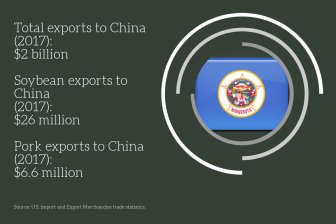 “China is a critical market for Minnesota agriculture, especially for soybeans, dairy, pork and wheat. The recent actions by one of our largest trade partners could prove to be detrimental to Minnesota farmers and ranchers. The current trade disputes need to be resolved without harming agriculture.” 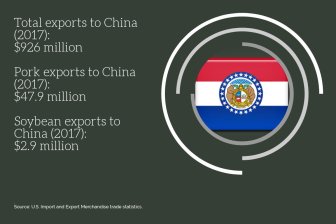 "If fully implemented, these actions spell trouble for Missouri agriculture producers.  China is by far the leading destination for U.S. soybeans, with the country buying nearly two thirds of all U.S. soybeans exported, and one fourth of our total crop.  A recent analysis by agricultural economists at Purdue estimated that a tariff regime similar to the one proposed by China would see an overall drop in U.S. soybean exports of 40%, with economic losses to the U.S. economy of over three billion dollars.  That figure doesn't include the economic costs of lost sales of pork, corn, cotton, and beef, all important products for Missouri agriculture.

"Farm prices are dropping in response to the announced actions at a time when prices are already at break-even or below, and farm income is forecast to be lower than at any time in the last twelve years.

"It is hard to remember a more potentially calamitous week for U.S. agriculture.

"China is a bad actor in international trade, and their total disregard of U.S. intellectual property rights and their habitual disrespect for the accepted norms of international trade must be addressed.  It is important to remember that the actions announced by both China and the U.S. don't take effect immediately.  There is time for an agreement that can both satisfy U.S. farmers and protect U.S. companies and employees who have suffered because of past Chinese actions.

"The Trump administration has entered into a high risk policy, one that can bring great benefits to our citizens, but one that is fraught with danger for farmers and the U.S. economy. The costs of failure will cripple agriculture for a generation. There is one thing for certain: Round after round of increasing import taxes between our two countries will make everyone poorer.  There is no winner in a trade war without a negotiated peace." 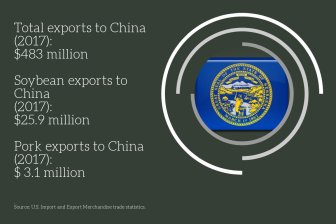 “When President Trump first announced he was considering tariffs on Chinese goods, we voiced our strong concerns that such action would lead to retaliatory tariffs and a potential “trade war” with China, one of the largest consumers of U.S. and Nebraska agricultural products. Despite these warnings, this Administration moved forward. Over the course of the last three days those actions have led to China enacting retaliatory tariffs on U.S. pork, and today, U.S. soybeans. These actions have cost farmers hundreds of millions of dollars in lost value in agriculture markets at a time when they can least afford it. Nebraska farmers and ranchers and the markets they rely on should not be sacrificed as a negotiation tactic. It’s critical the United States and China stop the ‘eye for an eye’ tactics and return to negotiations that serve the greater good for both interests.” 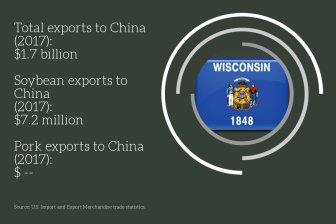 “Wisconsin farmers greatly benefit from trade. Wisconsin Farm Bureau has been a long-time supporter of open markets and fair trade because our farmers can and should be able to compete in a global market place.

"The most recent retaliation threat from China is alarming to say the least. With nearly $300 million of Wisconsin agricultural goods exported to China every year the state’s economy would most definitely see an impact if these threats became a reality. China and the U.S. need to focus on an agreement that will benefit both country’s interest.”