Farmers in California, the nation’s top agricultural state, are applying near-record levels of pesticides despite the rising popularity of organic produce and concerns about the health of farmworkers and rural schoolchildren.

This story was reported by FairWarning (www.fairwarning.org), a nonprofit news organization based in Pasadena, California, that focuses on public health, consumer and environmental issues.

The latest figures, released in April by the California Department of Pesticide Regulation and covering 2016, show that 209 million pounds of pesticide active ingredients were used in agriculture. That was down 1.4 percent from the year before, but still the third-highest yearly total since the state began reporting the numbers in 1991. The record high of 215 million pounds came in 1998.

Safety advocates say the new report paints a grim picture of continuing reliance on dangerous chemicals. Pesticides classified as human carcinogens or likely human carcinogens were applied to nearly 9.2 million acres statewide in 2016. That’s more acreage than the entire land area of each of nine states.

“Communities across the San Joaquin Valley and the Central Coast are regularly … exposed to hazardous pesticides including those linked to cancer, to reproductive and developmental harm,” said Paul Towers, organizing director for the Berkeley, California-based advocacy group Pesticide Action Network North America.

“Not only these dramatic and acute quantities that are sometimes cause for concern and send folks to the hospital. But these low-level exposures, particularly in rural agricultural and suburban communities near the agricultural edge, where people are breathing, drinking, eating small amounts of pesticides on a daily basis.”

Pesticide Action Network pointed out that two of the five mostly heavily used pesticides in 2016 were the DowDupont fumigant 1,3-dichloropropene (Telone) and glyphosate, used in Monsanto’s Roundup and other pesticides. Both are on California’s Proposition 65 list of chemicals requiring warnings about risks of cancer or reproductive harm.

DowDupont did not respond to a request for comment. Monsanto said, in a written statement, “Hundreds of scientific studies over 40 years – all conducted under international standards by a wide range of scientists and regulatory agencies – have consistently concluded that glyphosate is safe and not carcinogenic.”

State officials downplayed concerns. They said the high overall volume of pesticides used by farmers partly reflects increased use of lower-risk pest killers that tend to be applied more heavily than the most dangerous chemicals. These lower-risk substances include sulfur, mineral oils and kaolin clay, all used even by organic growers.

“The types of pesticides are really what we look at,” said Charlotte Fadipe, assistant director of the state pesticide regulation department. She said the agency focuses on substances likely to harm the quality of air and groundwater.

The agency’s report said the increased use of pest killers that pose less of an environmental threat “may actually serve to reduce overall risk if they are used as alternatives to higher risk chemicals.”

State officials also noted that in 2016 use of the controversial pesticide chlorpyrifos fell below one million pounds for the first time in more than a decade. “We’re glad to see that type of stuff decreased,” Fadipe said. Pesticide Action Network also said it regarded the reduced use of chlorpyrifos as “one encouraging piece of news.” 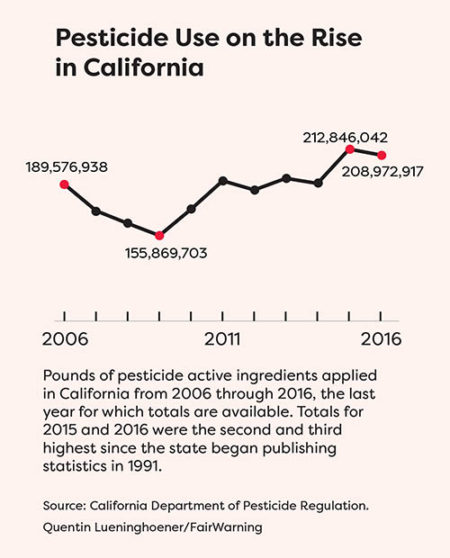 In November 2015, the Environmental Protection Agency issued a proposed rule to ban the use of chlorpyrifos based on possible neurodevelopmental risks to fetuses and children. But in 2017, under new EPA head Scott Pruitt, the agency reversed course and extended its review of the substance.

California, however, in December added it to the state’s Prop 65 list of chemicals. And just last week Hawaii’s legislature approved phasing out all use of chlorpyrifos by 2023.

This year, the state pesticide agency has issued a new rule requiring that growers refrain from using the most drift-prone application methods from 6 a.m. to 6 p.m. on weekdays within a quarter mile of schools and daycare centers. The action follows a 2014 state Department of Public Health report showing that 9 percent of the 2,511 schools surveyed in 15 leading agricultural counties had substantial amounts of pesticides applied within a quarter mile.

The pesticide agency report found that half of the pesticides used in 2016 were applied to crops in five Central Valley counties: Fresno, Kern, Tulare, Madera and San Joaquin, where much of the nation’s almond, pistachio, grape and citrus crops are grown.

Some experts say long-term changes in the mix of items farmers produce in California, including increases in almonds and other high value crops, give the agriculture industry the incentive to use more pesticides. Such crops present “a larger economic risk if pests are not controlled,”said Brad Hanson, a weed specialist at the University of California, Davis, plant science department.

Jim Farrar, director of the University of California’s statewide integrated pest management program, added that more pesticides are needed when “you move from something like alfalfa and sorghum for dairies, where cosmetic injury isn’t a problem … to something like oranges where if there’s a blemish on the rind you get downgraded even if the orange is perfectly healthy.”