Small family-run farms that raise organically, without genetically modifying crops or by reducing their use of pesticides and antibiotics, are such a small part of the U.S. government’s definition of a family farm that they often are lost in the crowd when it comes to government and industry support.

This story was produced by the Iowa Center for Public Affairs Journalism-IowaWatch, a non-profit, online news website at http://www.IowaWatch.org that collaborates with news organizations to produce explanatory and investigative reporting.

Some of these non-conventional farms lack enough support to obtain some federal farm subsidies that go to larger farms, but also professional network opportunities to grow their business, an IowaWatch investigation revealed.

“In my heart I’d like to be in one place right now in terms of having a more sustainable or regenerative farming operation,” Earl Canfield, owner and operator of Canfield Family Farm in northeast Iowa, said.

“I’m having to grapple with the reality of what does it take to actually get there.”

The U.S. Department of Agriculture sets an industry definition for family farms. But that definition doesn’t take acreage size into consideration and can include operations where the family may not own the land, or even farm it. It defines what a family farm is for a consistent technical term in research and policy, which includes farm subsidies. 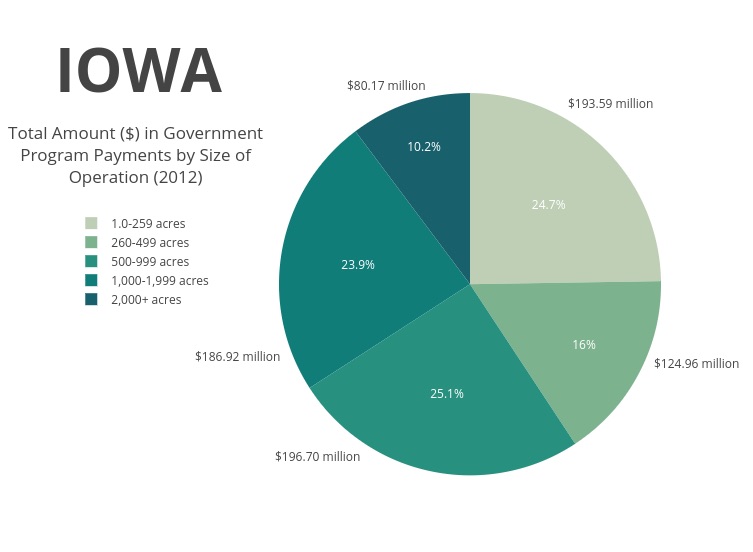 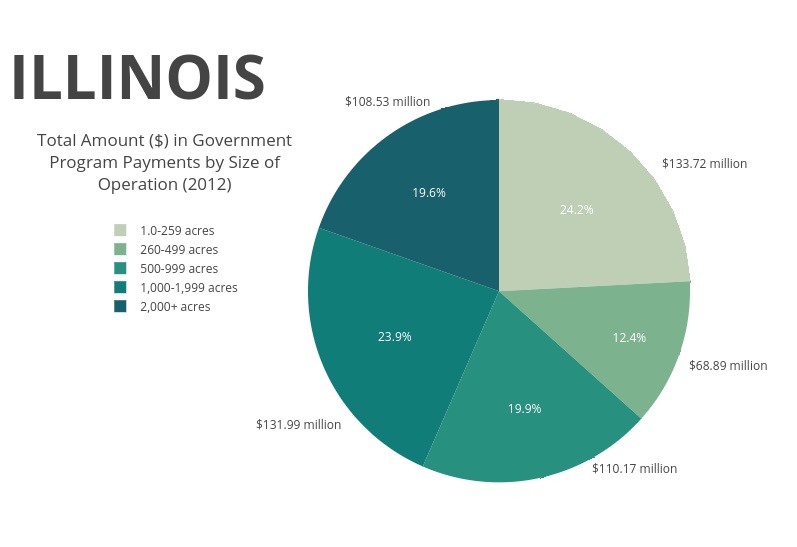 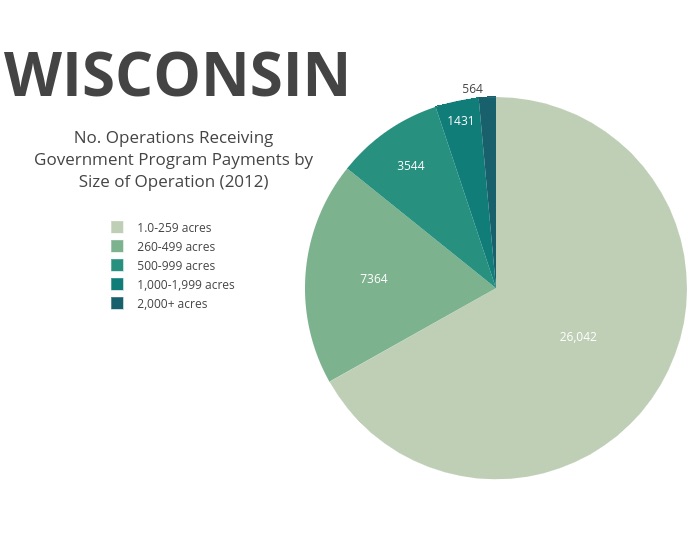 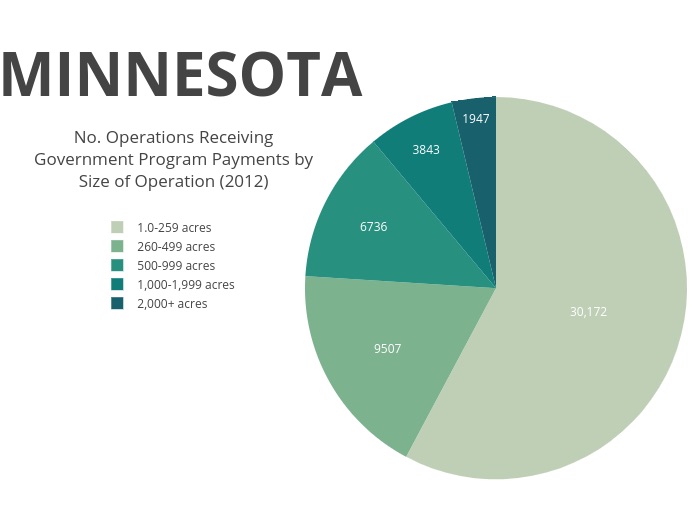 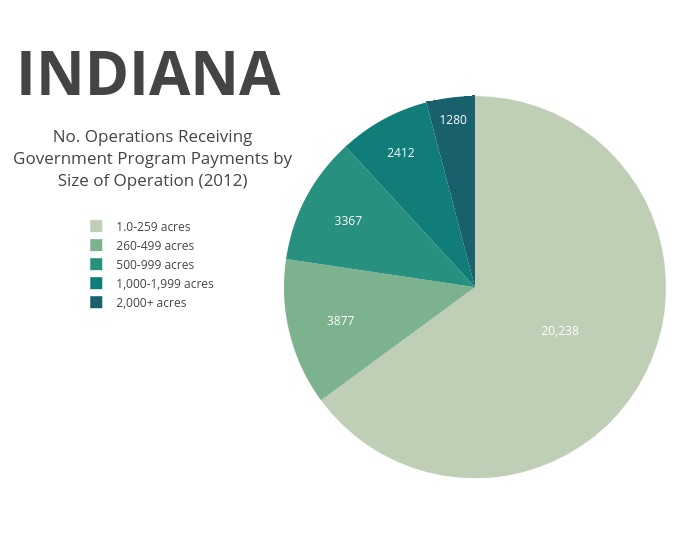 But lost in that, particularly when it comes to the research and policy, is that, according to an estimate done by IowaWatch, less than 7 percent — 5,636 operations — of Iowa’s farms are on small or medium acreages and run and owned by one family. The breakdown for states bordering Iowa is similar. 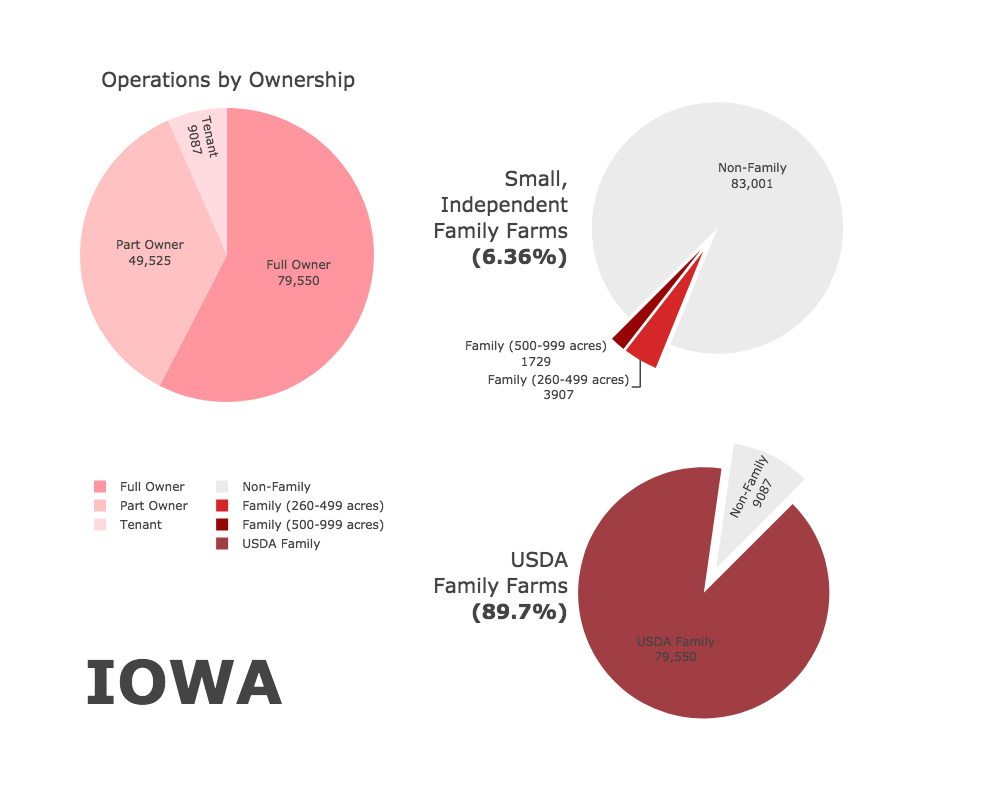 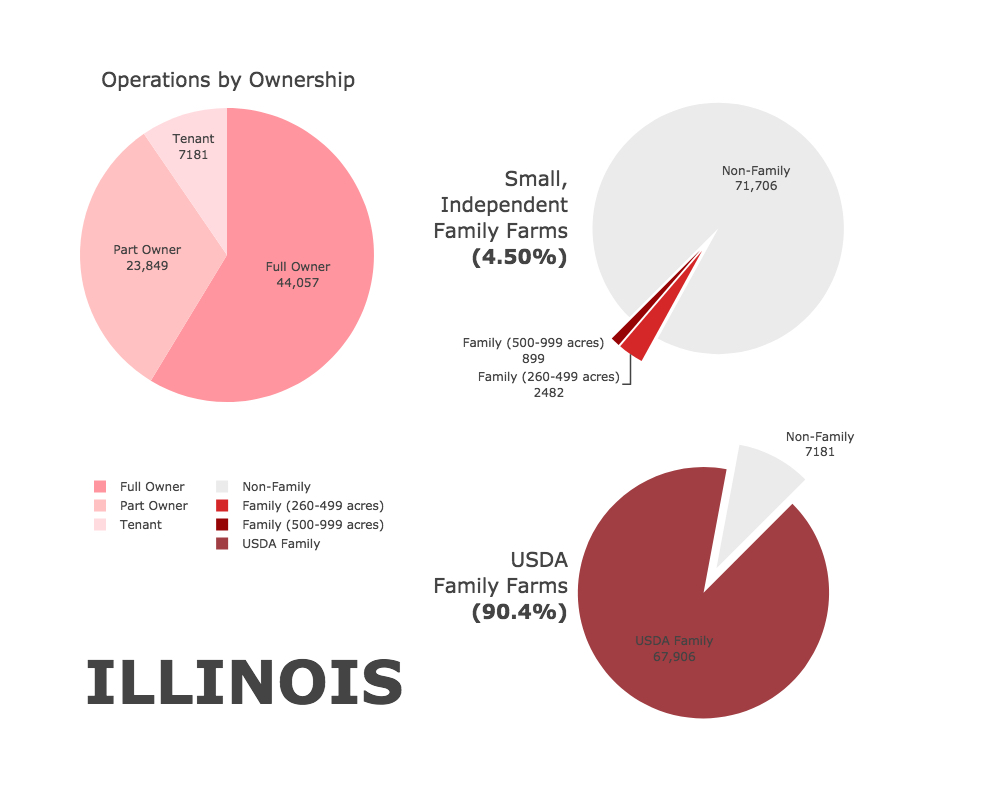 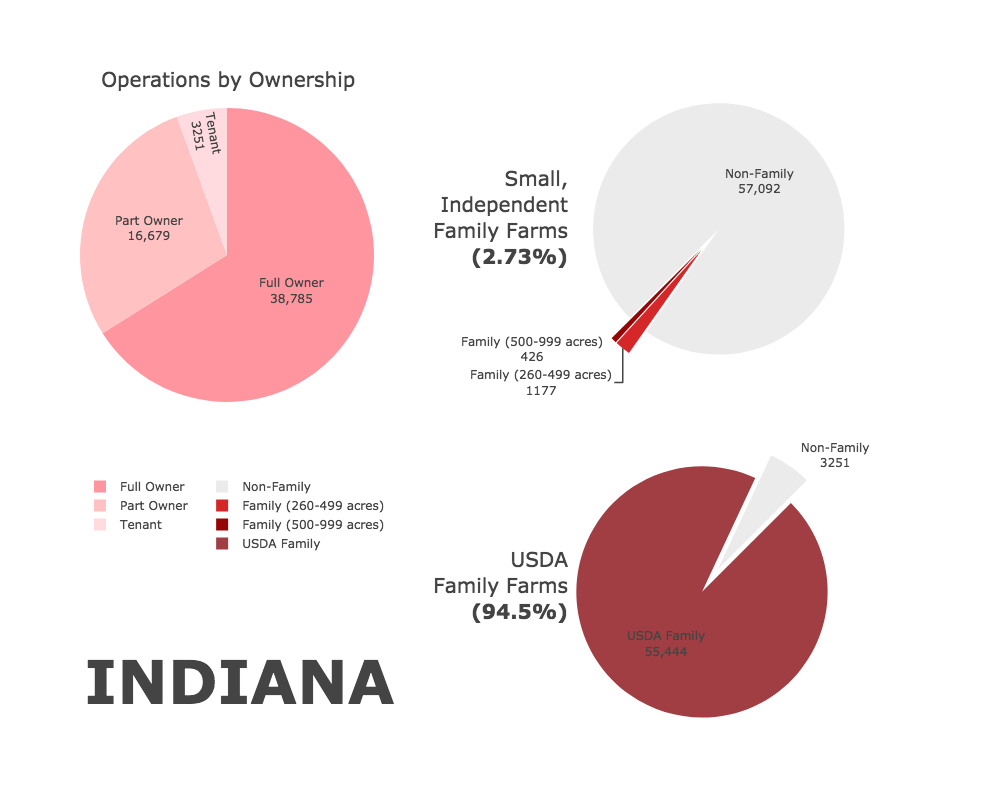 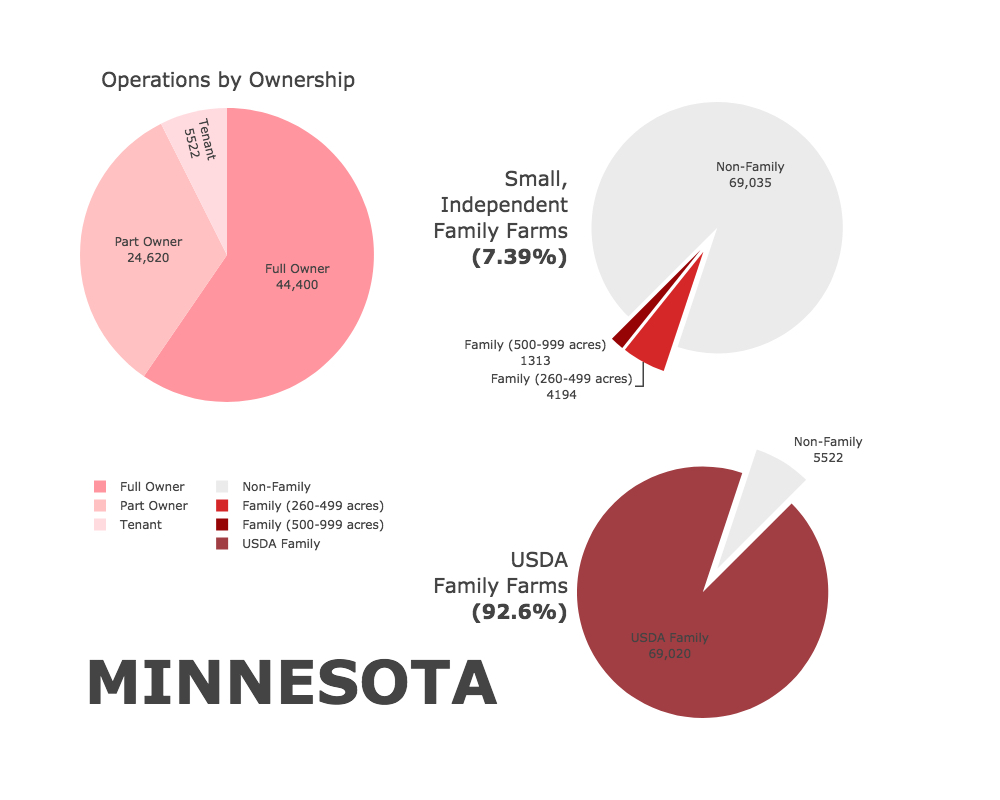 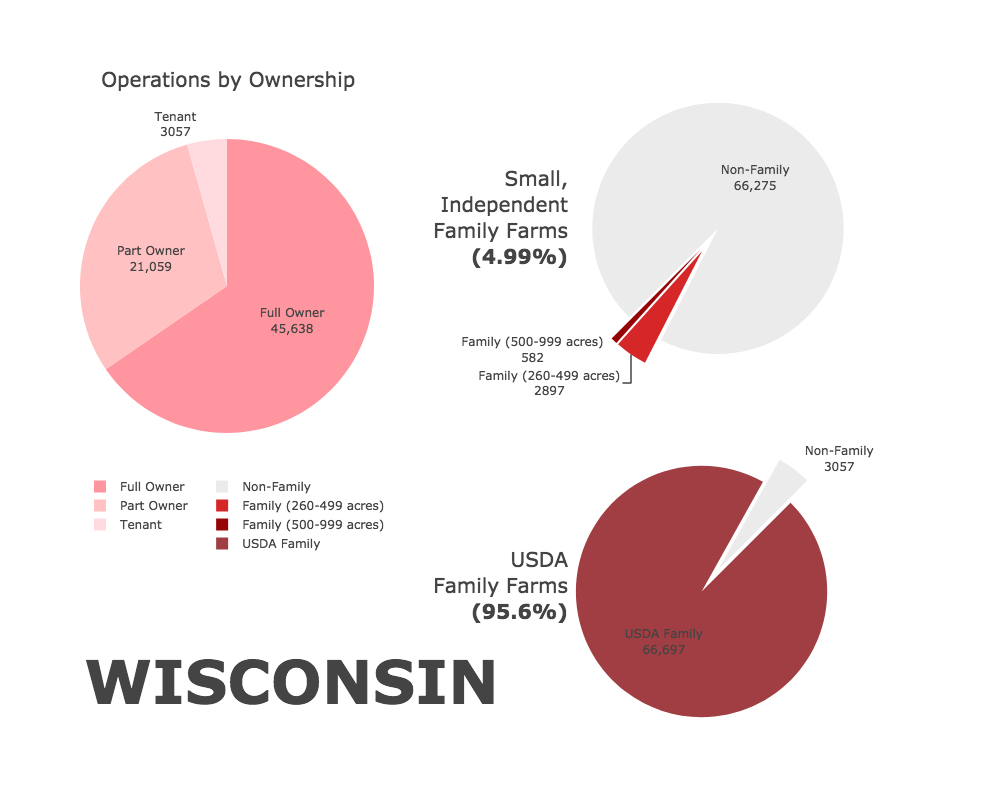 “What we’ve found is that the definition of family farm is being stretched…,” Aaron Lehman, president of the Iowa Farmers Union, said. “The public in general wants to see what they think of as a family farmer succeed and oftentimes we see that image distorted to include operations that indeed are much more corporate in nature.”

The federal government definition has become the overriding one for industry professionals when networking and marketing farm products and influencing public policy.

“When they talk about small farms they mean small conventional farms … not organic or alternative farms,” Dave Peters, a professor of sociology at Iowa State University, said.

Canfield farms 300 acres northeast of Waterloo, near Dunkerton. His production is a combination of non-GMO, natural, and organic feed, grain, hay, straw, produce, and eggs.

“If we don’t succeed … we’re not even going be here down the road to continue improving or doing what we’re doing,” Canfield said. 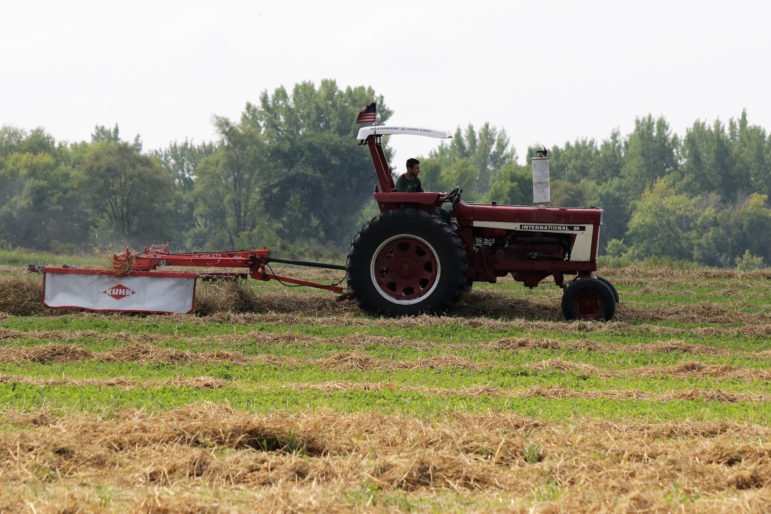 Matthew Canfield rakes over the straw one last time before bailing it later in the day, at his family’s farm near Dunkerton, Iowa. He is a son of Earl and Jane Canfield. Photo taken Aug. 18, 2018.

Non-conventional or alternative producers cultivate organically and reduce or eliminate the use of antibiotics, pesticides and GMO products. They’re often independent family farmers with as few as 250 to 500 acres up to 1,200 to 1,400 acres, using minimal hired labor, and they don’t contract with corporations or larger companies. 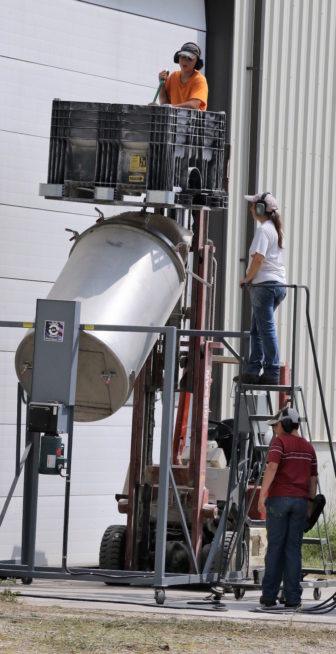 Andrew, Jane and Elijah Canfield add ground feed along with supplements to a mixer at their farm near Dunkerton, Iowa, on Aug. 18, 2018. Andrew and Elijah are sons of Earl and Jane Canfield.

But no distinction for them is made in the USDA family farm definition. The effects from that can be felt beyond the farm.

“We feel most small- to medium-size farms tend to be the operations that are extremely important to their rural communities,” Lehman said. “They tend to shop, buy and sell locally. Some of the larger operations in that category tend to support their local institutions less.”

The USDA does not have data on the number of these non-conventional family farms, but IowaWatch came up with an estimate by looking at 2012 Census of Agriculture data on farm ownership by size of operation.

IowaWatch defined “small, independent family farms” as those with full-owner status between 260 and 999 acres.

The USDA’s family farm definition includes part-owner and full-owner operations, and makes no distinction based on size of operation.

The USDA includes under its definition of a “full-owner operation” farms where the operator is a manager hired by a corporation, rather than an independent owner-operator. Because of this, IowaWatch’s estimate, while closer to the actual number of non-conventional family farms, is not perfect.

The Iowa congressional delegation used the term in a March 7 letter to President Donald Trump, urging the president not to impose tariffs on imported steel and aluminum for fear of setting into motion a “chain of retaliatory measures, hurting Iowans from the family farm to the family-owned manufacturing plant.”

IowaWatch reached out to the offices of each Iowa congressional delegate for comment on how they use the phrase “family farmer,” but only received a response from the office of U.S. Sen. Chuck Grassley, R-Iowa, who also used the term in a December 2017 opinion piece published on his website and distributed to various newspapers when commenting on the federal Tax Cuts and Jobs Act.

WHY THE WORRY ABOUT WORDS 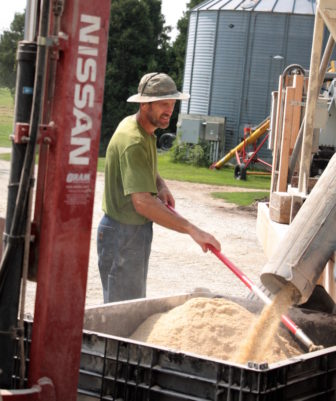 Daniel Prager, a USDA economist in Washington, D.C., said two federal definitions of a family farm have existed since 1988, with the most recent change in 2005. However, the change in definition wouldn’t impact the USDA’s reports on how many family farms exist in the United States, he said.

“I think it’s just a way to make a universal definition that extends across the different types of farms,” Prager said.

Lehman said the Iowa Farmers Union’s definition of a small family farm matches up sometimes with that of the USDA, but more often does not.

Stretching the definition in this way takes the focus off of small, non-conventional family farms, IowaWatch interviews showed.

While broad definitions by policymakers and the USDA effectively make small, non-conventional family farms invisible in research-based policy discussions, commodity interest groups like the corn growers, soybean and pork producers associations do a lot of the heavy lifting when it comes to maintaining and expanding markets for conventional producers.

“With the promotion or the market development education research we don’t target assistance to individual farmers, it’s more to help the overall industry,” Cassidy said.

Groups like the Iowa Farmers Union and Practical Farmers of Iowa are more concerned with providing support and resources to individual farmers, but operate using a fraction of the corn growers’ association budget. For instance, in 2016, the Iowa Farmers Union’s total expenses came in just under $90,000.

According to its website, the union works to support independent family farms “through education, legislation and cooperation and to provide Iowans with sustainable production, safe food, a clean environment and healthy communities.” The union provides education opportunities for adults and children via webinars, workshops, conferences and classes.

Canfield said Practical Farmers of Iowa is doing more than anyone in the state to promote different types of farming and help farmers find ways to market.

Practical Farmers of Iowa publishes educational podcasts and newsletters and holds field days, conferences, and “farminars” with the goal of connecting farmers and helping them learn from one another. 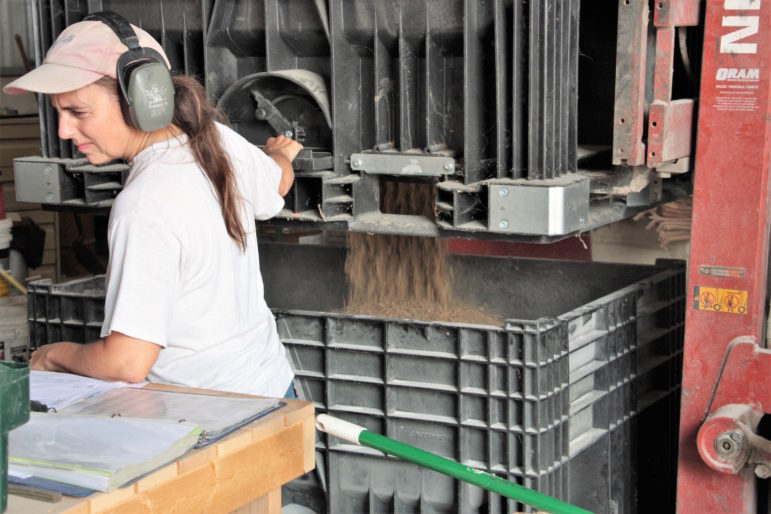 Jane Canfield watches the scale readings at the Canfield farm near Dunkerton, Iowa, as she adds roasted soybeans to a bin before grinding it into a mix for a customer.

The dearth of marketing support for alternative or alternatively-produced commodities leaves a lot of legwork for each individual non-conventional producer.

“It’s taken us three years of a lot of intentional effort to carve out a market for ourselves,” Canfield said. “Between web-based advertising and Craigslist and hanging up business cards flyers all over the place and just talking and networking with people, we’re starting to get more and more regular buyers for our products. But it’s a lot of work.”

Like many non-conventional farmers, most of Canfield’s business is local. His grain and feed are purchased by farmers and non-farmers largely for the animals they raise to butcher for themselves. Their produce and eggs are sold to individual buyers.

However, finding a place to sell alternative agriculture products stops many producers from exploring non-conventional farming.

“They run headlong into the wall of no place to sell it. They’ll very quickly get discouraged and just not do it again,” Canfield said.

The market for alternative agriculture exists, but without the marketing assistance of larger organizations, connecting with consumers is an ongoing challenge.

“I continue to find people that I would’ve thought I would’ve reached by now,” Canfield said. “And they maybe live within 10 miles of here and they say, ‘I just didn’t know you were here.’”

FIGHTING THE “BIGGER IS BETTER” ATTITUDE

Beyond dealing with the definition of a family farm, the smaller farms face another matter — business decisions made by those seeking agricultural products.

Iowa Farmers Union board member and education coordinator Ron Tigner said advocates of an economy of scale farming model often argue larger operations are just naturally more efficient than smaller farms are but that the claim is misleading.

“This economy of scale is skewed because we have policies that … make it look that good,” Tigner said.

Tigner, who lives in Webster County in northwest Iowa, once grew corn, soybeans and alfalfa on 175 acres in north central Iowa, but that was about 20 years ago. He no longer is a full-time farmer, but he has continued to work in farming.

“They’ll give breaks to certain farmers who are larger just to get their business,” he said. “For many, many years the types of crops that got the most share of the commodity support was corn, soybean, wheat, cotton, and rice. When you support that you’re actually manipulating the economy to drive it that direction.

“Diversified types of operation have been left out for many, many decades.”

This IowaWatch story was republished by the Marshalltown Times-Republican, The Courier (Waterloo, IA), the Corridor Business Journal, Wisconsin State Farmer and Little Village (Iowa City, IA) and versions were written by Modern Farm and aired on KCRG-TV9 (Cedar Rapids, IA) under IowaWatch’s mission of sharing stories with media partners.