Vistra Energy Corp. will soon propose to the Illinois EPA a set of options to close its coal ask ponds at the shuttered Vermilion Power Station near Oakwood, Illinois.

Vistra is publicly traded energy generation and retail company, currently ranked 499 on the Fortune 500 list with a market value of nearly $9 billion. In early 2018 Vistra merged with Dynegy Inc. and acquired all of Dynegy’s assets including the Vermilion site. The name of the combined company is Vistra.

The Stantec report includes a chart comparing timelines and costs for each option: three options for capping the ponds in place, and two for excavation of the coal ash and removal of the ponds.

Costs for removing the coal ash ponds are shown to be significantly higher than capping the ponds in place, but the report doesn’t provide information on how the costs were determined.

“They have proposed a cost of one hundred ninety two million dollars without telling us how that ash would be moved from the floodplain and where it would be taken,” said Pam Richart, co-director of the Champaign-based Eco-Justice Collaborative. “So how did you arrive at your 192 million dollar estimate which is significantly higher than leaving it in place?”

“When there is the debate about whether to leave the ash in the ground and put a top on it, or to move it to a safe dry lined storage, utilities come out with these estimates. And our experience is they grotesquely overstate the cost of removing the ash,” said Frank Holleman of the Southeastern Environmental Law Center, which is headquartered in Charlottesville, Virginia.

“But what we have seen after the fact is the cost is only 20 percent of what they initially estimated," he said. "So my warning would be to anyone involved in a public debate over whether to leave the ash in the and put a top on it or remove it to safe dry land storage, beware of the estimates utilities start throwing around. You can count on them to be greatly exaggerated.” 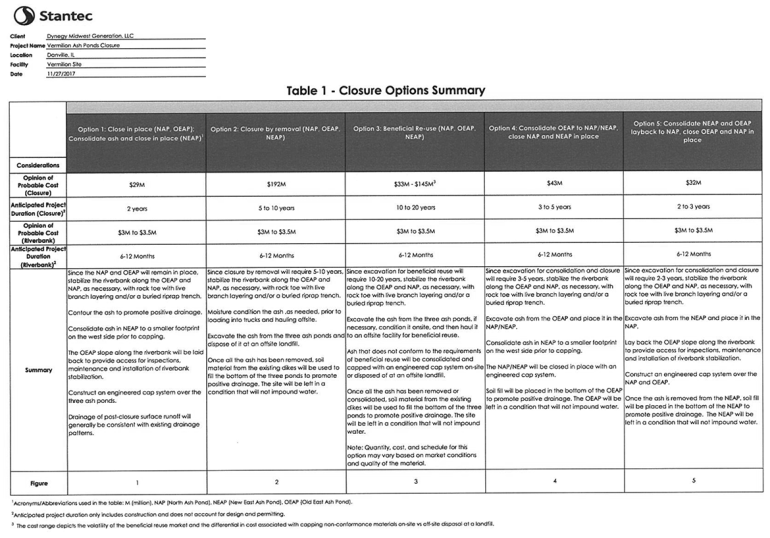 A table in the Stantec report shows five different options for closing the coal ash ponds at the Vermilion site. Costs are shown for each option, but no details about the basis for costs are in the report.

Another option listed in the Stantec report gives a wide estimate for removal of the coal ash for “beneficial reuse” at $33 million to $145 million. The other three options would cap the ponds and leave the coal ash in place, at an estimated cost of between $29 million and $43 million.

Sanjay Sofat, Bureau of Water Chief for Illinois EPA, said in an interview that the Vistra closure proposal due in October must provide much more detailed information. “They have to give us the rationale behind those costs and timeframes,” he said. “We have communicated that to them and we are expecting that to be part of the package in October.”

Sofat also said so long as Vistra's proposed closure options meet Illinois EPA requirements, the cost to the company will be a factor. “So let's say there are two options and both allowed them to comply, then maybe the cost could become the second factor,” he said.

But in comparing closure options, “what's cost effective to Dynegy isn't necessarily cost effective to the citizens of the state,” said Rob Kanter, a Prairie Rivers Network board member and Clinical Associate Professor at the School of Earth, Society & Environment at the University of Illinois. “So sure it's in their interest to not spend any more. But it's not in our interest as citizens, it's not in the interest of the state, to let that happen.”

If the ash ponds are capped in place, closure costs won’t be the end of expenses. Resources will be needed to monitor the ponds and the riverbanks and repair them as needed. “Even if it's a long term solution you know eventually in the end the taxpayer is going to be on the hook for it,” said Mike Marron, the former chairman of the Vermilion County Board who is now serving in the Illinois State Legislature. “Because whether it stays in place for five hundred years under that capped solution or another five days, somebody is going to have to take care of it eventually and it should not be the taxpayer.”