A fish wholesaler in Bensenville, Illinois, just south of O’Hare International Airport, might seem like an odd place for a corn, soybean and cattle farmer.

But that’s where Michele Aavang, a farmer from Woodstock, Illinois, was Tuesday as she and representatives from Fortune Fish Company and American Sale spoke at a town hall meeting about the damage tariffs have done to the American economy.

The meeting came just a day after the Trump administration announced an additional $200 billion worth of tariffs on Chinese imports, which will go into effect September 24, 2018. The same day as the town hall meeting, China announced another $60 billion in retaliatory tariffs on U.S. goods, many of which are on agricultural products like soybeans and pork.

The tariffs, or taxes, are a part of an ongoing trade dispute with China that began earlier this year when President Trump imposed a 25 percent tariff, or tax, on a list of 1,300 goods imported from China – worth about $50 billion – to make up for China’s “unfair trade practices” around U.S. technology and intellectual property. China is a top customer for many corn and soybean farmers, who have seen the price of their crops decline steeply in the months that the tariffs were imposed.

Tuesday's meeting was organized by Tariffs Hurt the Heartland, an advocacy group  “dedicated to showing how tariffs are hurting American families, workers, and communities.” The group is funded by Farmers for Free Trade, a not-for-profit social welfare group.

Tariffs in the field

Speaking before a crowd of dozens of Fortune Fish Company employees, Chicago business people and a few farmers from around the Chicago region, Aavang said farmers are feeling very uncertain as they head into harvest and begin planning for next year.

“We’re in a terrible situation. The atmosphere of uncertainty is making it impossible for us to plan for the future,” said Aavang.

She explained that, after five years of depressed farm income, the tariffs are just one more blow to an already beleaguered agricultural economy - the biggest industry in Illinois, she said.

“The stories I hear from the countryside are not good,” she said. “I’m hearing cases of increased bankruptcy on the farm, increased farmer suicides.”

Aavang said the prolonged trade war has bankers concerned about farmers’ ability to pay back the operating loans they take out to buy seed and other inputs.

“We’ve got bankers that are extremely nervous,” she said. “they’re unsure about who to lend to, analyzing our balance sheets more closely.”

She said for farmers just starting out, who don’t have a history with a banker or equity, it’s even more tenuous.

“It’s really not good for the younger farmers trying to get started.” Aavang said. 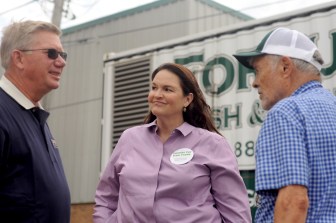 Michele Aavang (center) speaks to farmers after the town hall meeting at Fortune Fish Company in Bensenville, IL on September 18, 2018.

Aavang said that, as a member of the board of directors for the Illinois Farm Bureau, she’s doing all she can to communicate the pains of farmers to legislators in Washington D.C. But for Leon Issert, an 87-year-old farmer who, with his daughter, drove more than an hour to attend the town hall meeting, the Farm Bureau isn’t doing enough.

“Farm Bureau has to stick up for us on this trade deal, and they’re not,” said Issert. “We can’t even give our soybeans away, because the trade with China has been shut down.”

Adam Nielsen, director of national legislation and policy development for Illinois Farm Bureau said he’s afraid farmers will soon see long lines at the grain elevators and piles of grain laying out in the open, as buyers run out of room to store all the grain that will be harvested this fall.

Issert said it reminded him of stories of selling livestock during the Great Depression.

“You’d ship your cattle or hogs to the market, and instead of a check back for the proceeds, you’d get a billing, because they didn’t bring anything. This is serious business.”

Issert added that the $12 billion the Trump administration has promised in aid to farmers was nothing more than a bribe in his eyes.

“The reason Trump comes up with this aid for us,” said Issert, “he’s trying to buy our votes. Red states are mostly farmers, now they’re being used.”

Issert’s daughter, Nicole, said the uncertainty has them anxious for next year. 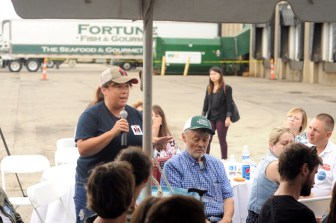 Nicole Issert speaks about the struggles she's seen on the farm she works with her father, Leon Issert (right).

“Maybe we’re going to have switch to a different crop. We may have to make big changes if the market price keeps going down.” She said they have the advantage of having extra grain to sell to cover their operating loan, but that every unexpected expense is a sharp reminder of their situation.

“Every time something goes wrong - we had a tire that blew on the tractor,” Nicole said, recalling some of the farm’s recent repairs. “We have the drill we have to get fixed. All these things are adding up when you don’t know how much is coming in.”

Leon said that, for farmers, they’re seeing the tariffs from both sides.

“We are getting it twice. We’re paying more for our rubber tires, whatever we get from China, and we’re getting less for our corn and beans that we’re selling,” he said. “So we’re getting taxed both ways, coming and going.”

While everyone speaking on the panel was sure to point out that they still supported the president, Nicole Issert said she sees signs that the farming community is losing patience.

“We went to the coffee shop, and most of those farmers I thought were Trump supporters. But they seem much more upset now,” She said. “They think this payout, this bailout to the farmers is a crock. They think it’s just a way to keep us quiet.”

Tariffs in the store

For the average consumer, the tariffs haven’t made it past the headlines.

But Bob Jones, president of American Sale, which sells everything from trampolines to hot tubs, said shoppers may start to see tariffs reflected on store shelves by the end of the year, as stores are still selling stock they bought months ago. Jones recalled a recent conversation with a high-level employee at Walmart.

“I said, ‘When do you think the impact will be felt?’ and she said right around the holiday times.” he said. “So that’s when you’re going to start seeing those extra taxes.”

And because stores buy in such large quantities, Jones said even a resolution to the trade war by the end of the year won’t instantly drop prices for consumers.

“For the products I carry, the cycle is really 9-12 months,” said Jones. “It’s going to continue on because there’s going to be a lot of product in the pipeline.”

Tariffs in the workplace

Each person on the panel represented a different industry and piece of the supply chain, but the message from each was clear - tariffs create uncertainty that makes it hard to plan for major business decisions. 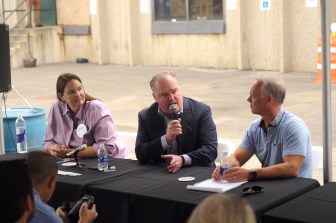 Sean O'Scannlain, president and CEO of Fortune International, Fortune Fish Company’s parent company, told the crowd about his company’s recent expansion to offer fish to meal kit companies. But the product going into those meal kits is Chinese Tilapia - now subject to a 10 percent tariff.

“If we were to add 10 or 25 percent on to Chinese tilapia,” O’Scannlain said, “that meal kit company is simply going to remove that product from their offerings.”

O’Scannlain said he was planning to invest more than a million dollars in new machinery and higher dozens of new workers to meet the demand. But now that’s on hold.

For existing workers, that uncertainty may translate to slower wage growth and even layoffs.

“It’ll be a very bumpy ride for us,” said Jones. “Through either reduced wages or layoffs, in the case that demand decreases - those are all negative things that will ripple right through our local community.”

O’Scannlain said it’s frustrating after a promising start to the year.

“I’m afraid this tariff environment and the trade wars and all this sense of uncertainty and higher cost is taking the wind out of the sale of this economy,” he said. “It is essentially a self-inflicted wound. Our own government is doing this - artificially increasing our costs.”