The report states that groundwater tests show unsafe levels of toxic chemicals and heavy metals at 22 of 24 Illinois coal-fired power plants. The tests were done by the companies that own the sites, collated by the environmental groups, and released this week. 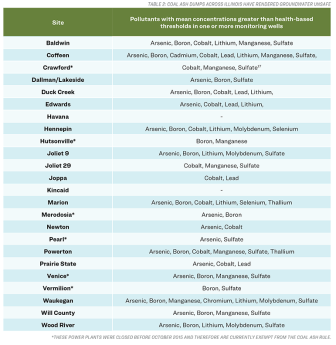 The report provides data on 24 Illinois coal power plants for which groundwater reports are available. Tests at all but two reveal contamination beyond federal and state standards.

Coal industry data on coal ash contamination was made public for the first time this year under federal coal ash rules.

Coal ash is a mix of solid waste from burning coal. It contains unsafe levels of toxins like arsenic, boron, lead, chromium, and selenium, which are harmful to human health, fish, and wildlife. At most sites the ash is mixed with water and dumped into unlined pits.

The report said that groundwater at the 22 sites had multiple contaminants in excess of state or federal water quality standards.

The closed Dynegy coal ash storage site in Vermilion County by the Middle Fork River is one of the contaminated sites. The site contains 666 million gallons of coal ash in three ponds and leakage into the river is already apparent.

“Because of the cooling water needs of coal plants, most dumped their ash next to water bodies,” said Jenny Cassel, an attorney with Earthjustice. “The only thing separating those ash dumps from the rivers and lakes we treasure is a thin embankment of earth.”

“The new groundwater report collects the most recent data from the companies or the EPA, and puts it in one place,” said Andrew Rehn, a water resources engineer at the Prairie Rivers Network. “It paints a clear picture that something needs to be done about coal ash.” 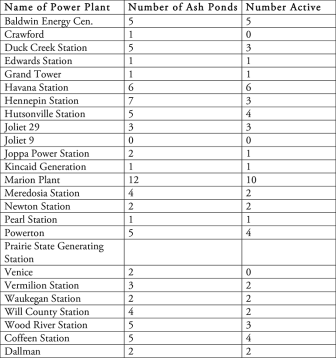 Illinois coal plants except Joliet 9 have anywhere from one to 12 coal ash ponds. Chart by Jack Brighton

The 45-page report, Cap and Run: Toxic Coal Ash Left Behind by Big Polluters Threatens Illinois Water, was published by the Environmental Integrity Project, Earthjustice, the Prairie Rivers Network, and the Sierra Club.

Federal coal ash rules don’t apply to sites that were retired or inactive when the rules were made in 2015. The gap in regulation means the public is in the dark about the oldest and most contaminated ash ponds – including many of the Illinois sites – and allows the sites to continue polluting groundwater.

“The vast majority of these ash ponds in Illinois are unlined,” Cassel said. “There is little or nothing stopping the pollution from leaching into groundwater. And that is what we found.”

An interactive map of Illinois Coal Power Plants with Ash Ponds as of June 2018. Click a location to view details on ash ponds at each site, including owner, number of ponds, active/inactive, lined/unlined, contaminants, and more. Data was compiled by the Prairie Rivers Network from groundwater tests made public by the power companies, and open records requests. Map by Jack Brighton.

“What this report shows is the need for Illinois to step up and do something about coal ash,” Rehn said, “especially as we approach an era in which these power plants are closing.”

Federal coal ash rules set standards for active sites. The rules require composite liners under ash ponds, and monitoring for potential contamination. But the federal rules don’t apply to many of the oldest and dirtiest sites, and enforcement is left to the states.

After a 2010 statewide assessment of 24 Illinois coal power plants found widespread contamination, the Illinois EPA proposed more stringent state coal ash rules. But since March 2017 the process has been stalled at the Illinois Pollution Control Board.

Read more about Coal Ash: A hash of regulation

Commenting on the report, the Illinois EPA said regardless of any potential state coal ash rules, the agency “regulates coal ash ponds in numerous ways to prevent and remediate groundwater contamination.”

“The Agency has also been enforcing Illinois groundwater quality standards, which are equivalent to, or more stringent than, the federal national primary drinking water regulations,” the statement said.

But environmental groups say Illinois has let power companies off the hook, allowing them to close leaking coal ash sites by merely capping the ponds while the ash continues to pollute water resources.

The coal industry is retiring many aging coal power plants. Many coal ash ponds have already been closed. Closure of ash ponds means the power company either removes the ash, or caps the ponds and leaves them in place.

A summary provided by the Illinois EPA shows the agency approved 23 coal ash pond closures since 2011. Coal ash was removed from only one site. The other 22 ponds were capped with the ash left in place. Only four of the capped ponds have liners to protect groundwater.

“One can cap an ash pond in place, if it is not saturated with water, or one can remove the ash.” Cassel said. “For the vast majority of these ash dumps, the owners have proposed to close them in place, leaving them sitting in or near groundwater.“

The environmental groups want a requirement for removing ash from all sites contaminating groundwater. They also want financial guarantees from the companies in the event of future damage, and a process for public input on closure plans. 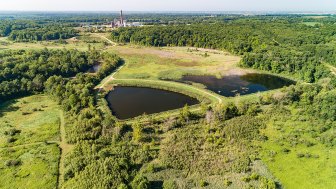 Since 1955 the Vermilion Power Plant has stored toxic coal ash in three ponds just yards from the Middle Fork Vermilion River near Oakwood, Illinois. The river runs through Kickapoo State Park, visited by more than a million people each year.

They see the closure of the three coal ash ponds at Dynegy's Vermilion Power Station as an opportunity to test the commitment of state agencies to community concerns.

Pollution from ash ponds at the site is threatening the Middle Fork, Illinois’ only federally designated National Scenic River. The riverbank is eroding rapidly under the ponds, increasing the risk of a massive spill into the river.

Vermilion County officials, business groups, and environmentalists are worried that Dynegy is preparing to close the ash ponds by capping them in place. And they’re calling for a public hearing to voice their concerns to the agencies considering Dynegy’s plan.

In commenting on the new report, the Illinois EPA acknowledged that “public outreach was not done for all the coal ash ponds” that have been closed. But the agency said it is now “committed to public notice and public hearings for actions related to the Vermilion Power Station.”

The environmental groups say they want more than just an airing of public concerns. “We need to implement solutions that stop ongoing groundwater contamination from the coal ash permanently,” Rehn said, “and the public deserves a voice in decisions about how coal ash will be handled in their neighborhood.”