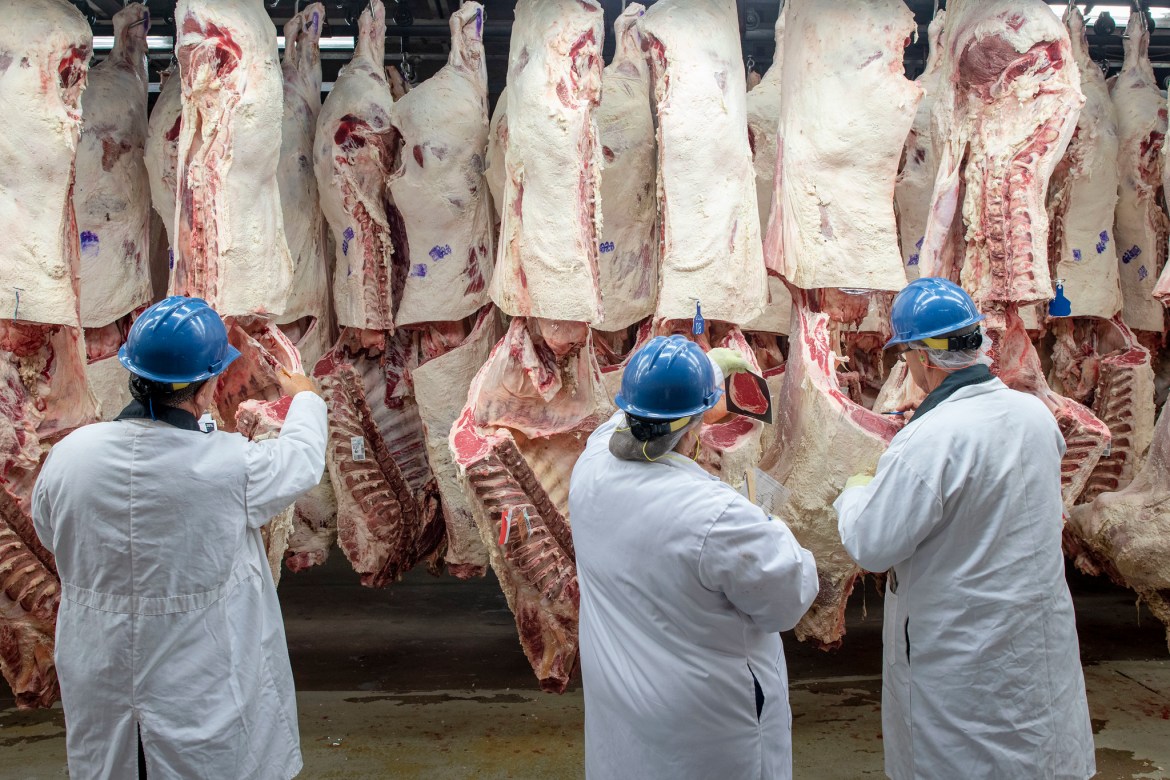 National Beef Packing Company, the fourth largest beef processor in the United States, is now approximately 80% owned by a company from another nation. That has some cattle ranchers worried.

In November, the Brazilian-owned meatpacker Marfrig Global Foods S.A. announced it would acquire 31% of National Beef from New York City-based investment bank Jefferies Financial Group for $970 million. This comes after an initial purchase of around half the Kansas City, Missouri-based company in June 2018.

In response to the announcement, U.S. Cattlemen’s Association sent a letter to Treasury Secretary Steven Mnuchin and the Committee on Foreign Investment in the United States on December 3, asking the Treasury Department to review the purchase.

The letter claims the acquisition threatens American food security by opening the door for inferior quality meat from Brazil to make it into U.S. hamburgers. It also alleges Marfrig used bribes to obtain loans from the Brazilian National Development Bank, which funded its purchase of National Beef.

In June 2017, the USDA temporarily stopped imports of Brazilian processed beef after 11% of beef tested was rejected due to “public health concerns, sanitary conditions, and animal health issues.” Typically, no more than 1% of beef is rejected at U.S. points of entry.

“We have extraordinarily high food standards in this country,” said Biondo. “These meat processors can import meat into this country, have it undergo a ‘significant transformation,’ and then they’re able to claim it as a product of the United States.”

Following the U.S. ban on Brazilian beef, the country’s Ministry of Agriculture found Brazilian meat companies, including JBS, were bribing meat inspectors. Marfrig said in a statement that its facilities were not involved in any bribery schemes.

“If anything, it might increase scrutiny at the borders,” he said. “As you make more global connectivity in our food industries, that we are maintaining our ability to carefully inspect and verify the product that comes into our country.”

Brazilian-owned companies now control two of the four meatpacking companies that process around 74% of all beef in the United States, according to the North American Meat Institute, a trade association representing meat processors.

While JBS S.A. is significantly larger than Marfrig’s National Beef, Schroeder said the trend makes some in the beef industry uneasy.

“There’s this feeling that they will not have the same distribution of that profit, that it’ll go overseas to the owners,” said Schroeder. “That they may not have the same obligation or commitment to the local community.”

“The growing trend of foreign investment in our food system demands increased attention and scrutiny in order to safeguard our nation’s food supply,” said the senators in the letter.

Both Marfrig and JBS are under investigation for allegedly paying bribes to Brazilian banks in exchange for loans used to purchase U.S. meatpacking companies like National Beef.

In addition to Brazil, Marfrig has operations in Argentina, Uruguay and Chile. Marfrig did not respond to requests for comment.

Many segments of the agriculture industry have experienced consolidation in the last 20 years, but there is some debate about how the cattle industry has been impacted.

Tyson Foods, JBS, Cargill Beef and National Beef have made around eight acquisitions of U.S. beef and cattle companies since 2001.

In 2019, The top four beef packers will process around three quarters of the nation’s beef in 27 facilities across the nation. But that number has barely moved since 2013, according to data from the North American Meat Institute.

“There has been almost no consolidation since 1988.  Transactions and acquisitions yes, but not consolidation,” said Sarah Little, vice president of communications for the North American Meat Institute.

But Tyson, JBS and Cargill are top players in the pork and poultry markets as well, so while consolidation in the beef industry may not be as prevalent, the meat industry as a whole is dominated by fewer processors.

“It comes back to this idea of fighting back against consolidation and making sure that we're enforcing the antitrust regulations and rules that are already on the books,” said Biondo. “We’ve got to strengthen U.S. cattle producers bottom line, and make sure their sustainable for the next generation.”

Schroeder said Marfrig’s purchase of National Beef is not as disruptive to the industry as if another domestic beef packer had bought the company, which could lead to plant closures in overlapping markets.

“You've got a company coming in here saying ‘We believe in this National Beef Company. We're going to put a lot of money on the line with a vested interest to have this company prosper,’” said Schroeder. “They’re not going to invest and then start closing down facilities.”

On August 9, a fire shuttered a Tyson plant in Holcomb, Kansas, which processed 6,000 head of cattle per day. Tyson said the plant represented a fifth of its beef business and 5% of the cattle industry’s processing capacity.

Cattle bound for the Holcomb plant were detoured to facilities in Iowa, Nebraska and other packing plants across the Midwest, according to Schroeder. Tyson expects the plant to be back online by January 2020.

On October 17, an explosion in Cargill’s largest beef packing plant in Dodge City, Kansas temporarily shut down production. Cargill processes 5,800 head per day at that location, according to its website. That facility was back online by October 21.

The Tyson incident sent a ripple through the cattle markets, driving cattle futures on the Chicago Mercantile Exchange down on worries about whether demand for beef could be met. The CME’s December live cattle market took more than two months to recover. Schroeder said the industry is still feeling the impact.

“Cattle prices went down very quickly. There are some questioning ‘did they go down further than they should?’” said Schroeder.

Cattle ranchers and feedlot operators took the brunt of the cost after the fire, shouldering extra transportation costs and resigning themselves to accepting those deep discounts on the price of their cattle.

The fire also cost Tyson, which faced significant building repairs, and paid its entire staff while the facility was shuttered.

But packers including Tyson, Cargill, JBS and Marfrig’s National Beef saw a spike in margins following the fire as well. Packer margins jumped from $191 to $358 per head the week after the Tyson plant fire, according the the Sterling Beef Profit Tracker. By the week ending August 23, packer margins had reached a high of $490.88.

Schroeder said some of that increase was because of the added burden placed on packers to receive the cattle displaced by the shuttered plant.

“Kansas and Texas couldn’t absorb them - they didn't have the capacity. So they were moving up north and things up north were shifting east, there was all kinds of shifting going on, and still is.”

Beef Packing companies have made an average $346.15 per head since the August fire, compared to feedlots, which lost an average of $20.50 per head. Packer margins averaged just $220 per head in 2018.

National Beef and its Brazilian owners were named as defendants, alongside Tyson, JBS and Cargill, in a class action antitrust lawsuit filed in the U.S. District Court of Minnesota on October 16.

The complaint, brought by Pacific Agri-Products, Inc., a California-based food distributor, alleges the top four companies conspired to hold back the number of cattle being slaughtered, creating an artificially low supply that unfairly raised prices for food distributors.

“As the ‘big four’ players in this highly concentrated industry, the defendants interact frequently at industry events and trade association meetings, and their respective executives are well-acquainted,” said Pacific Agri-Products in the complaint. “[The] defendants’ scheme succeeded, in part, due to the structure of the beef industry.”

It’s not just the food distributors that are raising the alarm about collusion among the biggest beef packers.

The April suit makes similar complaints that the packers colluded to restrict the number of cattle slaughtered in order to artificially depress live cattle prices and force cattle producers into long-term contracts, similar to those more common in the more vertically integrated poultry and pork industries.

All four of the top beef packers have grown their international presence in recent years, but there is little evidence that has increased the supply of international beef moving through U.S. processing facilities.

The import of live cattle and processed beef from Australia, Canada, New Zealand, Brazil and Mexico did increase from 2011 to 2015, but has dropped to the lowest levels since 1989, according to USDA data.

The U.S. Treasury Department did not respond to a request for comment on the USCA letter.