Despite Centers for Disease Control recommendations, a few states with large farmworker populations have not prioritized COVID-19 vaccinations for farmworkers.

Because farmworkers risk COVID-19 exposure in the course of their jobs, the CDC proposed that they should be near the front of the vaccination line. But Texas and Florida, which have large farmworker populations, have not included farmworkers in their initial rollouts, according to state documents.

Farmworker advocates said the people who pick and process the fruits and vegetables consumers rely on should become inoculated from the virus.

“We believe that farmworkers should be a high priority for vaccine distribution because of their essential work and because of the high risk of exposure in the agricultural workplace,” said Alexis Guild, Director of Health Policy and Programs at Farmworker Justice.

In Texas, people who are old enough and have a history of illness are the priority, and that could include agricultural workers, said Douglas Loveday, Texas Department of State Health Services spokesman.

“Right now, agricultural workers 65 and older and those with underlying chronic illnesses that can lead to several illness or death if infected by COVID-19 can be vaccinated,” he said. “Discussions on future priority groups have begun, but nothing has yet been decided.”

Across the U.S., most farmworkers are not over 65. According to data from the U.S. Department of Agriculture, the average age of farmworkers is 39, with over half being younger than 44.

This past summer, Marco Antonio Galvan Gomez, a 49-year old agricultural worker, died from COVID-19 a few weeks after arriving in Texas.

Similarly, only people 65 years old and older, long-term care facility residents and health care personnel are authorized to receive vaccines in Florida, even though farmworkers in the state have been hit hard by COVID-19. For instance, the Immokalee community in southern Florida, known as the capital of tomato production in the U.S., had dozens of deaths over the summer.

Florida’s health department did not return requests for comment.

During the pandemic, farmworkers have been forced to choose between protecting their lives and keeping their jobs. At least 22 farmworkers have died from COVID-19, according to data from the National Center for Farmworker Health.

As essential workers, farmworkers “were required to continue to work throughout the pandemic, but they often have been excluded from protections at the national and state level,” said Kara Moberg, attorney at Farmworker Legal Services of Michigan.

More than half lack health insurance, according to the U.S. Department of Labor’s 2016 National Agricultural Workers Survey. Many employers don’t provide it.

Many workers also live in employer-provided accommodations — often in cramped housing with limited options for social distancing. Among those who don’t live in these facilities, it’s also common to live in crowded conditions.

“For workers who do not work or who do not live in employer-provided housing, they still tend to live in crowded housing conditions because of their low wages,” Guild of Farmworker Justice said. “So it’s very hard for them to socially isolate, socially distance.”

An October study by researchers from the University of California San Diego found that farmworkers, especially those who do not speak English and live in poverty, “may be at heightened risk for COVID-19 mortality in non-urban counties.”

All states’ distribution plans for vaccines follow a phased approach, but that differs from state to state.

The phases are decided based on vaccine availability. People in groups 1a, 1b and 1c (or equivalent) will receive the vaccine when the supply is limited. As vaccine availability increases, people in the next phases will be able to receive vaccinations, according to the CDC.

The problem with the CDC guidelines is that, similar to safety protections for workers, there is no federal standard for vaccine prioritization, said Jared Hayes, policy analyst for the Environmental Working Group. This is especially problematic for a workforce that frequently moves across state lines, he said.

“One challenge, especially with regard to farmworkers, many of whom are undocumented, is ensuring that they have access to the vaccine,” he said. “We’ve seen how badly the vaccine rollout (has been). Imagine how complicated it would be to vaccinate a workforce that is undocumented and migratory.”

The following map shows the prioritization status for farmworkers in vaccination plans across the U.S. In the dark green states, farmworkers are set to receive vaccines as recommended by the CDC. Red states have so far not included farmworkers in their vaccination schedules. 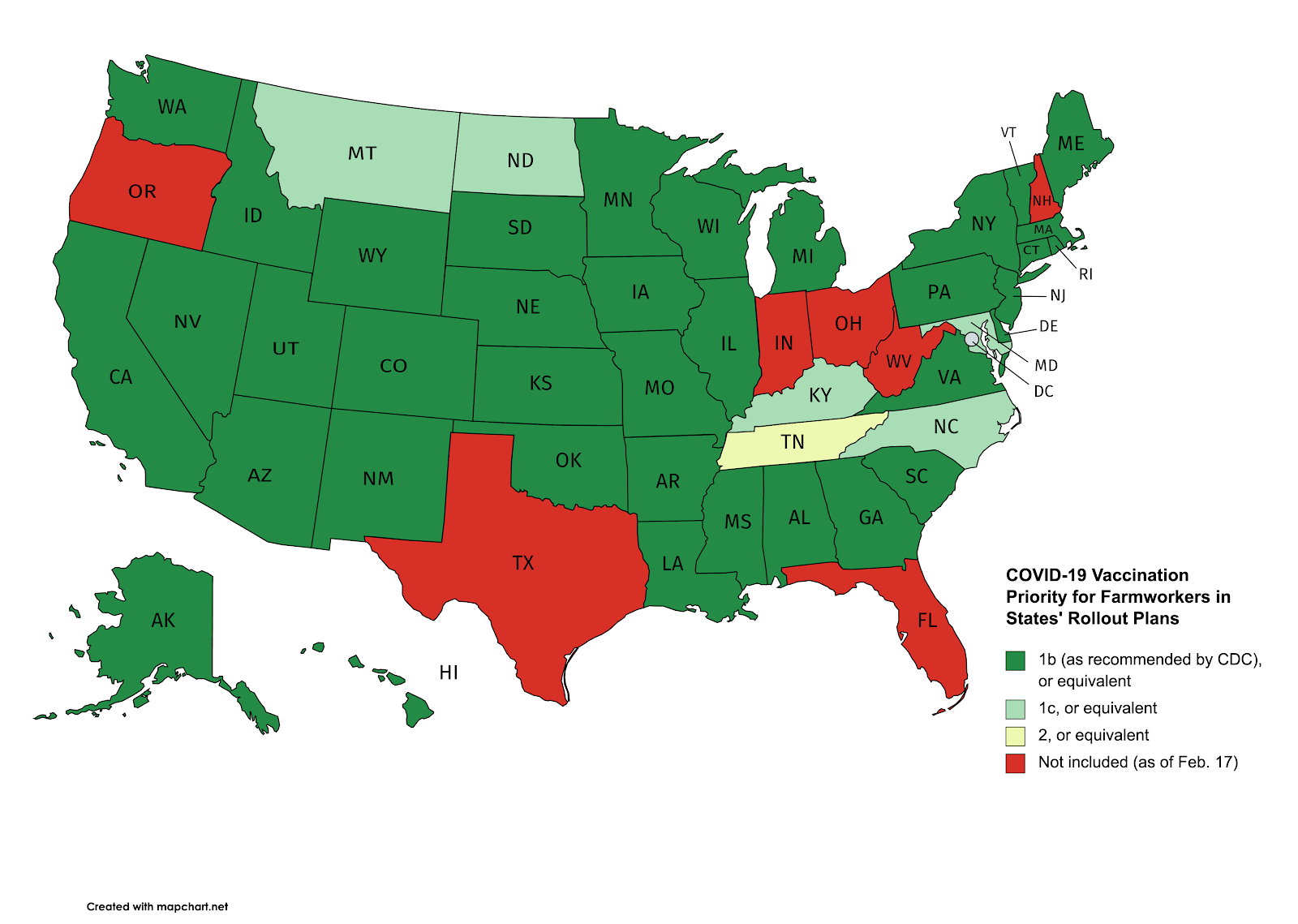 Most states have followed CDC recommendations on farmworkers, but advocates worry it will be challenging to get the vaccine to them.

North Carolina, plans to vaccinate farmworkers and other frontline essential workers in the state’s Group 3 (equivalent to the CDC’s 1c phase), following healthcare workers and people 65-years old or older, which belong to Groups 1 and 2 respectively, according to the state’s vaccination plan.

As of Feb. 16, only Groups 1 and 2 were eligible to receive vaccines.

“The way that things are rolling out in North Carolina and just the timing of everything, we haven’t really gotten there yet,” said Justin Flores, vice president of the Farm Labor Organizing Committee (FLOC), which represents tens of thousands of agricultural workers in the south and midwest.

In the midwest, the Michigan Immigrant Rights Center, which “represents hundreds of food and agricultural workers across the state,” complained that these workers are “currently not scheduled to receive vaccines until May,” according to an online statement.

Even though agricultural workers are classified as part of phase 1b in the state — which meant they were scheduled to receive vaccines as early as mid-January — they are not expected to receive vaccination until more than three months after the phase begins, according to Michigan’s prioritization guidance.

Mistrust of authorities, immigration status may lead to few vaccinations

Another problem that advocates see is that a combination of mistrust, fear and misinformation might lead farmworkers to avoid looking for vaccinations in the first place.

“The issue of distribution is really complicated and there’s a lot of fear in many communities,” said Guild, of Farmworker Justice. “We’ve heard from our partners on the ground, we’ve heard of mistrust and fears around vaccines.”

According to some advocates, the role of community organizations in educating and providing critical information will be crucial in the next few months.

“Relying on expecting farmworkers to go to the CVS or a medical health clinic won’t be enough,” Hayes, of the Environmental Working Group, said. “We’re going to need to lean on the non-profit organizations that have always served farmworkers to ensure that they actually have access to the vaccine.”

Another reason why agricultural workers are in a vulnerable position with regard to vaccine access is that many of them lack legal immigration status, advocates said.

Roughly half of all farmworkers lack legal immigration status, according to the USDA.

Despite this, some advocates are hopeful that immigration status won’t affect farmworkers’ access to vaccination.

In a press release, the Department of Homeland Security encouraged undocumented workers to get vaccinated, stating that “U.S. Immigration and Customs Enforcement (ICE) and U.S. Customs and Border Protection will not conduct enforcement operations at or near vaccine distribution sites or clinics.”

“It is a moral and public health imperative to ensure that all individuals residing in the United States have access to the vaccine. DHS encourages all individuals regardless of immigration status, to receive the COVID-19 vaccine once eligible under local distribution guidelines,” the department said.

North Carolina is not checking immigration status during vaccinations, but some residents told the News & Observer they were still scared to get the vaccine.

In Nebraska, despite the federal government’s emphasis on reaching undocumented workers, Nebraska Governor Pete Ricketts said in January that only documented workers will receive the vaccine.

Neither the governor’s office nor Nebraska’s health department responded to a request for comment.