GRAND ISLE, La. – The dead zone may seem like an abstract concept in Iowa, a state more than 800 miles to the north of the Gulf, but for fishermen in Louisiana the destruction is very real.

Harmful algal blooms — the explosion of algae due to nitrogen and other pollutants — occur every year all along the coast of the United States; and they come with a price. 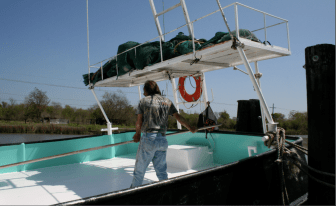 A shrimper in Golden Meadows, La. works on his boat, preparing for the shrimping season.

One event, like the one that creates the Gulf’s dead zone every year, can cost a coastal economy tens of millions of dollars, according to the National Oceanic and Atmospheric Administration. Estimates published by the administration in 2004 show that these events had already caused at least $1 billion in damages.

“If you kill everything in the gulf, what are you going to eat? I always said we could live off the land, but we’re turning into the sewer system for the whole country." - Dean Blanchard

In the Gulf, a large part of these damages comes from the drop in production among fishermen and shrimpers. After Alaska, Louisiana is the second largest source of commercial fish in the United States, catching over one billion pounds of produce, which nets roughly $284 million.

But key products, such as brown shrimp and menhaden, have been in decline for the past decade. Some scientists worry that these numbers will plummet if the dead zone continues to grow, and some fishermen say they have already seen the damage.

Runoff from fertilizer creates high nutrient levels in Iowa waters. This can cause algae growth and high levels of nitrate, which may be dangerous to human health. The nutrients then flow down the Mississippi River and into the Gulf, causing hypoxia, which means that the amount of oxygen in the ocean plummets and creatures that cannot escape suffocate.

When water from the Mississippi River flows into the Gulf of Mexico, it carries with it all the pollutants picked up along the way. The fresh water of the Mississippi is not as dense as the salty ocean water so it forms a layer on top. This layer acts like Saran Wrap, cutting off the oxygen flow to the salty layer below.

Farmers use nitrogen because it helps their crops grow. The same principle applies once the nitrogen reaches the ocean but this time it spurs the growth of algae, causing an algal bloom. Eventually, the algae die and sink to the bottom where it begins to decompose. Bacteria are the principal decomposers and the dead algae provide a feast, causing bacteria populations to skyrocket. These bacteria use up the oxygen in the ocean layer. Due to the Saran Wrap-like fresh water layer, no more oxygen is available down below and bottom-dwelling organisms begin to move out or die off, creating a dead zone.

Aaron Gwinnup, a water resources engineer at HR Green, who participated in measuring the dead zone in 2008, explained that the surface appearances of the ocean might be deceiving to observers who “see fish in the surface water and think, ‘this isn’t a dead zone, there are fish.’” But it’s the hidden bottom dwellers that are affected, including many popular food sources, such as clams, crabs, and shrimp.

“You would see crabs swimming along the top of the water,” Gwinnup said. “They swam all the way to the surface, about 150 feet, because they were literally choking below.”

Dean Blanchard, the president and owner of Dean Blanchard Seafood in Grand Isle, La., comes from five generations of Gulf fishermen. But over the past four to five years, Blanchard said the Gulf has changed. His business can go from “getting half a million pounds a day to zero,” and from making $200,000 to $300,000 a day to losing $6,000 to $7,000.

All of a Sudden – ‘There’s Nothing’

Although the dead zone isn’t apparent from the surface, Blanchard said it is easy enough to notice from a fishing boat.

“All of a sudden, bup, there’s nothing,” he said, referring to the suddenly empty nets that shrimping boats pull through the water.

“What they have to do is come back in, take more groceries and more fuel and see how far they’ve got to go. Usually, you could throw a baseball at [the boats] from the beach. They’re just right there,” he said. “When the dead zone comes, they’re a hundred miles out.”

Blanchard said he realizes the farmers “up there” have to make a living too, but it is coming at the cost of his.

“If you kill everything in the gulf, what are you going to eat?” he asked. “I always said we could live off the land, but we’re turning into the sewer system for the whole country.”

Video: Down the Mississippi and into the Gulf

Talking about the effect on his production, Blanchard grew animated, gesturing with his cigarette.

“I had a guy up in Missouri who sued me,” Blanchard said. “Said he got sick off of my fish. I asked if he lived by the Mississippi River. He said yes. So, he sent his shit down the river and I sent it back up.”

Although the dead zone does not last all year, Blanchard said it occurs during what used to be a good fishing season, usually starting up in July.

“Shrimp is huge in the food chain of everything down here,” he said. “Red drum is a huge sport fish,” he added pointing to a sign that advertised the Red Fish Rodeo, “and the number one bait is a chunk of crab.”

All of these are affected by hypoxia.

The seabob have disappeared entirely, added Josie Cheramie, the commissioner of tourism for the town. Seabob is a small species of shrimp.

“It used to be good Christmas money,” she said. “But we don’t get that good money anymore. I don’t remember the last time they brought them in. It’s been that long.”

Shrimpers also mentioned the visible changes in the water. Darran Anselmi was preparing his boat, My Girl, in Golden Meadows, La. He talked about the “red tide,” or the explosion of algae caused by the influx of nutrients.

Fish Run from a Red Tide

“When I was working in Texas, I was trawling, and in two hours I caught a ton of shrimp. They were running from it. Everything runs from it,” Anselmi said. “Then, when you hit the red tide, it looks like dark tea. There’s nothing in it.”

Research shows that hypoxia has negative effects on ocean life, reducing growth, reproduction, species composition and interaction, according to an assessment of hypoxia on the U.S. coasts conducted by the Committee on Environment and Natural Resources.

Although it is clear damage is occurring, the report also says fully understanding the implications and effects of hypoxia is beyond the current state of science and requires more research. Some also question the role of nutrients in hypoxia and the ability of scientists to demonstrate that connection.

“This is not an experiment you can put in a test tube,” said Nancy Rabalais, the executive director and professor of the Louisiana Universities Marine Consortium and one of the leading scientists of the Gulf dead zone.

“If we turned off the nutrients, you would definitely see improvement in the water quality. That has happened in other places in the world,” Rabalais said, referencing other dead zones, like the ones in the Baltic and Black seas, where nutrient levels decreased, followed by a decrease in hypoxia.

Rabalais, who has studied the zone since 1985, stressed that understanding the hypoxic zone requires collecting data that spans years. Each summer, she leads a scientific crew to map the dead zone aboard a research vessel called the Pelican.

The research cruise includes measuring and mapping oxygen levels at over 100 stations in the Gulf, Rabalais said. From July 24 to July 30, Rabalais and her crew conducted a cruise to measure the dead zone, which stretched across 6,765 square miles.

Scientists had expected a larger hypoxic zone, Rabalais said in a press release from the Consortium. However, she added, Tropical Storm Don blew through the Gulf and up to the coast of Texas, mixing up the water column and re-oxygenizing the lower layer of water.

In addition to these scientific calculations, Rabalais said she frequently dives into the hypoxic water.

“The obvious difference is that we see no fish,” she said of the oxygen-deprived layer that begins about 30-feet down.

She also described a type of white bacteria.

“[It] creates a webbing or a matting on the bottom when the oxygen levels are severely low.”

In 2008, when Gwinnup a water resources engineer at HR Green, accompanied Rabalais and her crew on the cruise, the group also took core samples of the ocean floor.

“Basically they pulled up a bunch of muck,” Gwinnup said. “It was the nastiest grey-black, stinky goo.”

These cores supply a “snapshot” back in time, Gwinnup said. They show that the hypoxic zone has increased in size and severity.

“Normally all kinds of life would be inside,” he said. “Worms, shells, crabs. There was nothing.”

Reposted with permission from IowaWatch.org