It’s been almost three years since more than 500 million eggs were recalled in 2010 because of an outbreak of Salmonella that caused nearly 2,000 illnesses - the largest outbreak of its kind on record.

Yet under a new egg safety plan approved shortly before the recall, all egg production facilities are still not inspected as required by the plan. In fact, it could be years before they are.

The Food and Drug Administration is one of four federal agencies that play a role in the egg and hen inspection process.

A review of government reports and inspection and recall data by the Midwest Center for Investigative Reporting shows the new shell egg safety inspection system is still rife with slow responses, low standards and a lack of communication and coordination among federal oversight agencies.

Given that a flock of laying hens is usually kept in production for two to three laying cycles, or up to 36 months at the longest, the FDA could miss an entire rotation of hens during this implementation phase.

“We estimate it will take three to five additional years to complete inspections of all registered egg producers, including those farms that supply hatcheries,” said Theresa Eisenman, a spokeswoman for the FDA in an email.

The overall egg inspection system has periodically come under heavy criticism for a lack of coordination and for taking as long as a decade to implement improvements.

Recently, a USDA internal audit revealed that more than one of its agencies knew of Salmonella contamination at the Iowa farm at the heart of the 2010 recall.

The internal audit  states that Animal and Plant Health Inspection Service officials knew about an environmental test at the farm that was positive for Salmonella Enteritidis four months prior to the recall.

Meanwhile, officials in a different USDA office, the Agricultural Marketing Service, visited the farm two weeks before the recall and observed the same sanitation issues that the FDA later determined to be the probable cause of the Salmonella E. related illnesses.

In addition to failing to share information, USDA agencies were not conducting regular facility inspections, or coordinating with FDA, the internal audit found.

In their response, Food Safety and Inspection Service officials said they will review existing coordination efforts and create a plan of action, if needed, and implement a new plan by November 2013.

Agricultural Marketing Service officials completed changes to their processes in 2012, according to their response to the audit.

The FDA modernization act is meant to improve the prevention of food safety problems, enforce safety and prevention standards, and better coordinate recalls across the 15 agencies that collectively oversee at least 30 food safety laws.

FDA district offices across the country also train state personnel to do inspections. Since 2010, 73 state-level inspectors in 17 states have attended the FDA Egg Safety Inspection course, according to data obtained from the FDA. The training comes at a time when the FDA is now overhauling its inspection system under the Food Safety Modernization Act, which passed in 2011.

But FDA inspectors found "significant deficiencies" at 40 percent of the more than 500 facilities inspected in 2011 under the new egg safety plan, according to a final report on inspections issued July 2012.

Most of the deficiencies were related to lack of a Salmonella prevention plan. FDA noted 14 violations as egregious and warranted an official warning letter to the producer.

The same coordination and communication problems have existed for decades, according to a 1999 Government Accountability Office report.

Yet, it took the Food and Drug Administration 10 years to develop an egg safety plan that was finalized in 2010 and went into effect just a month before the  August egg recall.

The Food and Drug Administration now requires an inspection of all egg production facilities as part of its new egg safety plan.

Since September 2010, the FDA has been working to inspect the operations in the 50,000 plus category.  It took 15 months to inspect about 600 facilities. These operations make up 80 percent of egg production.

Michael Taylor, FDA's Deputy Commissioner for Foods, has said the new rules set safety standards to thwart outbreaks of Salmonella E., like the one in 2010.

"We think that the industry's compliance with this rule will significantly reduce the risk of SE infections and outbreaks in the future," Taylor said in a statement on the FDA website.  "These inspections will help ensure high rates of compliance and in turn improve the safety of eggs."

But some egg producers and industry representatives see FDA involvement in egg inspection as unnecessary and chafe under its rules.

Chad Gregory is president and CEO of United Egg Producers - the national trade association for egg farmers in the United States.

“We have worked with USDA and AMS for years and years,” said Gregory. “USDA understands farming and the inspectors are there and going out to see producers.” 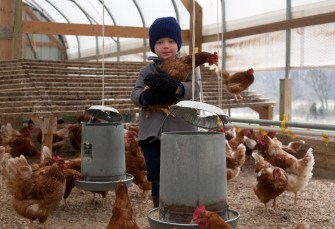 Four-year-old Marcus Miller holds one of his father's chickens March 14, 2013, at the family farm in Campbell Hill, Ill.

Increased record keeping, training of workers, rodent and pest control, vaccinations and aggressive bio-security requirements are all part of the FDA’s final rule, which went into effect in 2010.

From September 2010 to July 2013, the FDA has issued 20 warning letters to egg production companies.

Officials from the FDA are now inspecting smaller egg production facilities - or those producers with less than 50,000 hens.

Even though it could be 2016 to 2018 before the new round of inspections is complete, John Sheehan, FDA’s director for the division of plant and dairy food safety, said the FDA is on track with the timeline to get to egg producers.

During this implementation phase of the FDA final rule, producers are to conduct Salmonella E. testing of their flocks and facilities. Swabs are taken from various points in the hen houses and then analyzed for Salmonella E.

Producers currently can send swabs from a laying house to Animal and Plant Health Inspection Service for analysis.

However, the agency is under no obligation to report facilities that test positive for Salmonella E. to the FDA or any other USDA oversight agencies.

Animal and Plant Health Inspection Service officials worried that if it were required to make findings public that producers would no longer use its testing service, according to the federal audit.

Sheehan said it is too soon to see “markers” to determine a drop in Salmonella E. rates since the final rule implementation.

“We don’t have concrete data to point to,” said Sheehan. “We are gratified to see how the implementation of the rule has been met. That will ensure eggs are safer.”

The role of the Food Safety and Inspection Service

Food Safety and Inspection Service was also cited in the 2012 internal audit for not having an effective enforcement strategy in place to deal with shell egg distributors or producers that habitually violate USDA regulations.

Companies, including Wright County Egg (see related story) , which have multiple citations on file, received a series of warning letters but the federal oversight agency did not seek civil penalties or criminal sanctions, nor did it seize eggs that were found to be stored at improper temperatures.

According to the 2012 USDA audit, while its investigators were in the field conducting a review with a Food and Safety Inspection Service agent, they found an egg distributor to be in direct violation of the temperature policy.

A pallet of more than 10,000 shell eggs was found sitting in a warehouse area in which the temperature was approximately 83 degrees. Eggs are to be stored at 45 degrees or cooler.

Company officials informed the USDA team that the eggs had been unrefrigerated for approximately five hours.

The federal inspector was prepared to seize and destroy the eggs. However, “he was directed by his supervisor to release them.”

The Food and Safety Inspection Service officials said the eggs would first need to test positive for Salmonella E. before they could be seized and destroyed. Therefore, the eggs were released and only a warning letter was issued.

The federal audit reported that FDA and USDA have worked out new agreements to better coordinate their efforts.

In addition, Food and Safety Inspection Service and Agricultural Marketing Service have “developed a web based inter-agency referral report system” to improve communication.

New agreements with producers would require that the agency be notified if the facility tests positive for Salmonella E.

Testing though could still take several days, or weeks, in which eggs are still being graded and distributed.

Food and Safety Inspection Service has agreed to assess the effectiveness of its temperature and refrigeration standards. The agency is also evaluating the current enforcement system in place to more effectively penalize producers that are repeatedly found in violation of standards.

But the agency stands its ground in claiming minimal responsibility.

“FSIS is not the lead on shell eggs, we have very limited role,” Richard McIntire, a spokesman for the agency said in an email.