Thousands of pounds of meat across the country were recalled this week for health risks.

The U.S. Department of Agriculture’s Food Safety and Inspection Service announced a series of “high” health risk meat recalls, affecting food retailers and distributors throughout most of the country.

The USDA classified the recalls as “Class I,” meaning that “there is a reasonable probability that the use of the [recalled products] will cause serious, adverse health consequences or death.” 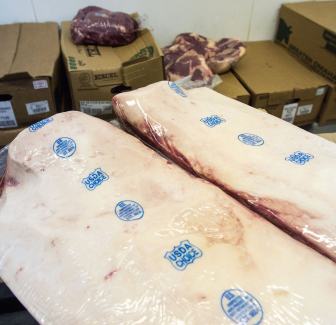 The USDA announced that food distributors recently recalled more than 11 tons of meat. While only one person has gotten sick from the contaminated food, safety officials fear many consumers still have unsafe meat in their freezers.

- 11 tons of chicken, ham and beef products across 27 states because of possible Listeria monocytogenes contaminations.

- Hundreds of units of a Minnesota’s Costco’s 88-percent lean fresh ground beef because of a possible contamination from the E. coli strain O157:H7.

More on the recalls

The news release reported that those products went out to food retailers in 27 states, and that the possible Listeria monocytogenes contaminated products have expiration dates ranging from Oct. 23 to Nov. 26.

As of Oct. 22, there were no reported illnesses.

“A trace-back investigation and follow-up testing by FDA at the facility determined there was potential cross contamination of products with Listeria monocytogenes from product contact surfaces,” the release stated. “FSIS and the company have not received reports of illnesses due to consumption of these products.”

A Garden Fresh Foods distributor in Wisconsin also issued a recall of about 7,000 pounds of ready-to-eat chicken and ham products because of a possible Listeria monocytogenes contamination. The products from that recall include Archer Farms rotisserie chicken salad, D’Amico and Sons chicken salad products, Weis ham salad, and Garden Fresh ham salad with sweet relish.

Officials from the Food Safety and Inspection Service said in a news release that the products “were distributed to retail and food service establishments nationwide.”

As of Oct. 17, there were no reported illnesses.

Listeria monocytogenes is a bacterium that when consumed may cause fever, muscle aches, diarrhea and other gastrointestinal symptoms, according to the Centers for Disease Control and Prevention. Some cases can turn into septicemia or meningitis.

Finally, a Minnesota Costco issued a recall after learning that its 88-percent lean fresh ground beef may be contaminated with the E. coli strain O157:H7. The store sold the product to at least 342 consumers, and safety officials said they are concerned some of the product may still be in those consumers’ freezers.

As of Oct. 22, there has been at least one reported illness linked to the E. coli contamination.

“E. coli O157:H7 is a potentially deadly bacterium that can cause dehydration, bloody diarrhea and abdominal cramps two to eight days after exposure to the organism,” wrote food safety officials in a release. “While most people recover within a week, some develop a type of kidney failure called hemolytic uremic syndrome.”

E. coli strain O156:H7 is the most common strain, though others exist as well.

About 265,000 infections occur each year from E. coli in the United States, according to the Centers for Disease Control and Prevention.

Also this year, one Listeriosis outbreak from Farmstead cheeses resulted in six hospitalizations and one death.

The Centers for Disease Control and Prevention estimated that about 1,600 illnesses and 260 deaths occur from Listeria monocytogenes each year in the United States.