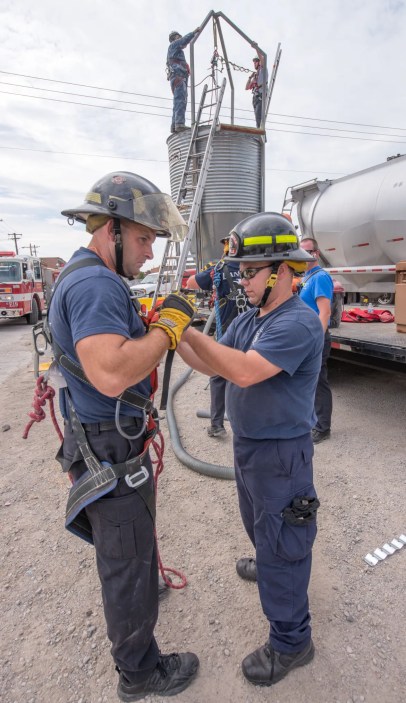 The Occupational Safety and Health Administration is responsible for overseeing workplace safety, but the organization is handicapped when it comes to dealing with small farms and agriculture sites that handle grain.

OSHA’s federal guidelines prohibit it from enforcing regulations through inspections on both family farms and farms that employ fewer than 10 workers. Consequently, many places left vulnerable to grain-bin accidents are neglected.

More than half of all documented entrapments – where the site was known – happen on farms currently exempt from OSHA standards, according to data compiled by Purdue University’s Agricultural Safety and Health Program.

Officials from OSHA said they are aware of that blind spot.

“One of our biggest concerns is with smaller farmers that we technically don’t have jurisdiction over,” said Scott Allen, an OSHA spokesperson for the Chicago regional office. “We get a lot of problems there because they’re small farms that don’t have a lot of employees so they think they can go in bins just because they have that attitude, ‘It’s not going to happen to me.’”

A main reason for the limitation is the blurred relationship between employer and employee on smaller farms, said Tom Bielema, the area director for the Peoria, Ill., OSHA office.

In many cases, the employer and employee are father and son or siblings, he said.

Nonetheless, some agriculture safety experts – such as Bob Aherin, an agricultural safety expert for the University of Illinois – are critical of the limitation and believe it is a “flaw” in the system. They argue that OSHA was established to protect all working men and women, not just those with bosses.

“We’re unlike a lot of other countries,” said Aherin. “In Canada and Western Europe – most of the countries over there – the safety regulations they have apply to everybody that works on a farm.”

In addition to its jurisdiction limitations, Allen said OSHA simply does not have the time or the personnel to inspect every grain bin at every facility in the country. So, instead of preventing grain bin accidents through enforcement, it tries to prevent grain bin fatalities through education.

OSHA recently teamed up with various grain safety organizations to develop a sticker that workers can place on grain bins to remind them of dangers. The sticker is designed to look like a stop-sign. It has warnings such as “lockout all moving equipment” and “avoid engulfment.”

“We’re giving them the means and methods and the understanding of what the requirements are, what the hazards are, and what they can do to fix them,” said Bielema. “And then we’re expecting them to go out and make those changes.”

OSHA conducts inspections when employees file complaints that claim hazardous working conditions and when other agencies refer OSHA to a specific site.

Officials from the administration also plan “programmed inspections” for high-hazard industries or individual workplaces that have experienced a lot of injuries. Finally, OSHA conducts investigation inspections in response to “fatalities” or “catastrophes,” which involve a death or the hospitalization of three or more employees.

Inspections are organized into two parts.

During the first part of an OSHA inspection, inspectors will introduce themselves to the site’s operator. Then, they will take a look at records, documents and data to review safety training history and to pinpoint any repetitive problems.

During the second part of an OSHA inspection, inspectors will perform the physical inspection and will interview employees to make sure what they’re seeing is representative of a typical day’s work. They will assess electrical hazards, fall hazards, grain hazards, equipment hazards and vehicle hazards.

Then, OSHA will determine whether it will issue penalties for any safety violations.

If the site violated OSHA standards for the first time, OSHA can issue a penalty of up to $7,000.

If OSHA found the same violations from a previous inspection, the site can be held in “willful disregard” of OSHA regulations. In that case, the site can be fined up to $70,000.
Fines are unlimited if OSHA is conducting an inspection in response to a worker’s death.