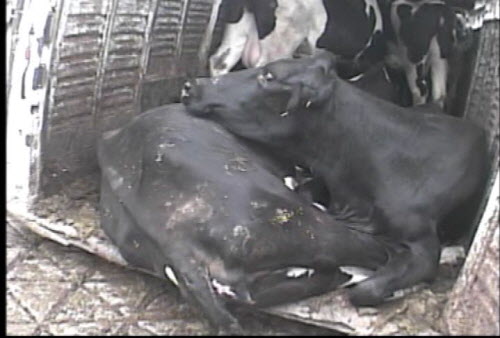 The Humane Society of the United States helped conduct a six-week undercover operation at a slaughter facility in Chino, Calif. These images were taken from a video that came from the investigation. If ag-gag legislation were passed, efforts such as this one may become illegal. 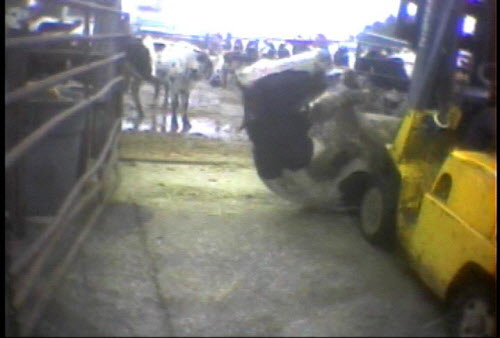 In its lawsuit, The Humane Society cited the fact that workers at the Westland and Hallmark slaughter operation in California would run over downer cattle with forklifts. 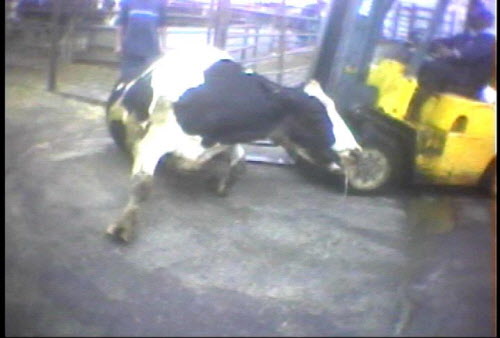 According to The Humane Society's initial complaint, workers would also lift cows up via forklift and drop them on the pavement. 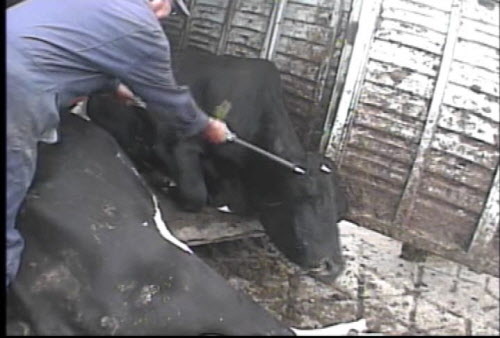 The lawsuit also stated that workers would hit cows in the eyes and face with wooden paddles. 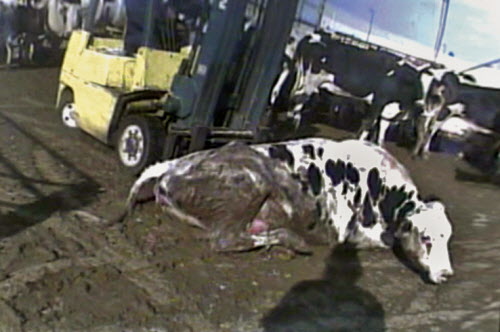 The U.S. Department of Agirculture bans the use of downer cattle because of health risks. Downer animals are animals that are no longer able to stand on their on power. The hidden-camera documentation of these abuses led a major meat recall and multimillion dollar lawsuit. 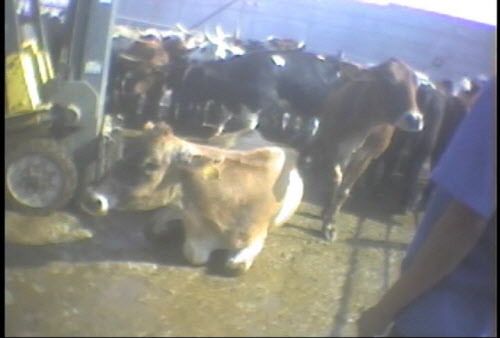 The U.S. Department of Agriculture named the Westland slaughter facility the 2004 - 2005 "Supplier of the Year."

The settlement ends a nearly five-year legal battle that first started in February 2008 when The Humane Society of the United States filed a False Claims Act lawsuit against Hallmark Meat Packing Company and Westland Meat Company of California for inhumanly slaughtering “downer cattle” for human consumption, a direct violation of Department of Agriculture standards.

“This judgment sends a strong message to those who profit from the abuse of farm animals,” said Peter Petersan, director of animal protection litigation with The Humane Society. “Although numerous line workers have been prosecuted for farm animal cruelty over the last decade, this is the first time the consequences of animal cruelty have been felt by those sitting in the corner office as well."

Under the settlement, Westland Meat Company will pay $240,000, while entering into consent of judgment for $155 million, according to the news release. The company is unable to pay the full $155 million because of a lack of assets.

In addition to Westland and Hallmark, two other businesses and an estate associated with the slaughter operation also reached a settlement.

- 2008: The Humane Society of The United States filed a False Claims Act lawsuit against a Westland and Hallmark beef slaughter operation in Chino., Calif, after an undercover investigator videotaped a series of animal abuses.

- 2008: After the video was released, the U.S. Department of Agriculture announced a recall for 143 million pounds of the California slaughter operation’s beef -- the largest recall in U.S. history.

- 2009: The U.S. government joined the lawsuit as a joint plaintiff with the Humane Society.

M&M Management, Cattleman’s Choice and the estate of Cattleman’s Choice’s deceased owner – including the owner’s surviving spouse, “who was not alleged to have engaged in any wrongdoing” – will also pay a combined total of about $2.45 million.

Even though the case was settled before going to trial, attorneys from the defense team said that they were confident of winning a favorable verdict.

They said that the decision to settle was simply a way to minimize the inevitable financial losses that their clients were set to incur, even in a potential victory.

“Even if we did win – which we were hopeful that we had a very compelling case to tell the jury – even if we did win, at the end of the day, it would really be a hollow victory because there’s nothing for us to recover,” said Susan Leader, a defense attorney that was part of the team that eventually assumed representation for all the defendants involved with the case not including the Hallmarks.

The False Claims Act, under which the Humane chose to file lawsuit, allows a private group to bring a lawsuit on behalf of the government and to share in any proceeds from the suit.

The Humane Society is set to receive about $600,000 following the settlement.

A False Claims Act suit also allows the federal government to intervene in the lawsuit.

Court records show that the United States government elected to enter the case in April of 2009, becoming a joint plaintiff with The Humane Society.

“We don’t get any damages, we don’t recover our attorney’s fees, and, in fact, the government can prolong this forever and appeal the results and this could just go on and on and on,” Leader said, ‘”So that was the predicament we were faced with and that was something we were mindful of when we discussed terms of a settlement with the government.”

Downer cattle are considered cattle that are too sick, too injured or too weak to stand on their own power. The Department of Agriculture forbids the use of downer cattle for human food consumption because of health reasons.

Cattle that are unable to stand often have a large amount of manure and other material splattered on their hide. As a result, when a downer cow is slaughtered, that unclean hide has a greater chance of affecting the meat and contaminating it with potentially harmful diseases. The spread of Bovine Spongiform Encephalopathy – commonly known as mad cow disease -- is also a risk when it comes to downer cattle. 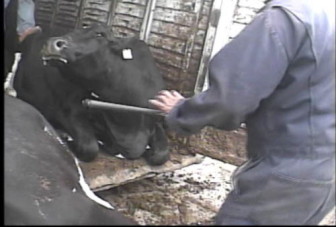 Provided by The Humane Society of The United States

The meat from the California slaughter operation was used in the National School Lunch Program, which fed about 31 million school children in 2012.

According to Department of Agriculture regulations, any cattle that at any time prior to slaughter become disabled – including cattle disabled after passing inspections – must be immediately condemned and disposed of.

For these reasons, back in 2008, the Humane Society lawsuit brought on the largest meat recall in U.S. history when the Food Safety and Inspection Service announced a recall of more than 143 million pounds of raw and frozen beef products.

Even though millions of pounds of downer cattle meat were shipped to schools across the country, Food Safety and Inspection Service officials categorized the recall as a “Class II recall,” meaning the chances of public health risks were low.

The National School Lunch Program, established in 1946, is a federal meal program that provides low-cost or free lunches to school children in more than 100,000 schools and child care centers.

In 2012, the program provided meals to more than 31 million school children each school day.

“Children across the country depend on the National School Lunch Program to provide them with a healthy meal each day, so we all depend on companies providing food to the program to follow the rules designed to ensure those meals are safe to eat,” said Stuart Delery, assistant attorney general for the Justice Department’s Civil Division, in a Department of Justice press release. “The Justice Department will pursue aggressively anyone whose unlawful conduct puts the safety of our food at risk.”

In additional to the National School Lunch Program, Department of Agriculture records also show that meat had also been distributed to the Emergency Food Assistance Program and the Food Distribution Program on Indian reservations.

The Humane Society filed the lawsuit after one of its undercover investigators videotaped a series of abuses at the Westland slaughter and Hallmark packing operation in Chino, Calif.

However, he also said that it had a history of using downed animals.

Court records show that the undercover operator got a job with the slaughter operation and, for six weeks, was employed as a “pen worker.” During that time, his duties included unloading cattle from livestock trailers, handling cattle, driving cattle into the kill chute for slaughter, stunning cattle prior to slaughter and maintaining records.

In its initial lawsuit, representatives from the Humane Society stated that workers from the meat companies were shown kicking downer animals in the face, ramming wooden paddles into animals’ faces and eyes, and running over disabled animals with forklifts.

Court records also show that other alleged examples of inhumane animal treatment included instances where workers blasted disabled cows in the face with a high-pressure water hose for several consecutive minutes, forced a non-ambulatory cow to crawl into a kill chute on its knees because it could no longer walk, and hoisted cows in the air with a forklift only to drop them on the pavement.

All of those examples were “standard animal handling procedures” at the Westland and Hallmark operation, stated the lawsuit.

The introduction of the lawsuit against Westland and Hallmark from 2008 states that: “For years, Defendants knowingly purchased and slaughtered sick, injured, diseased and disabled [downer] cattle and sold meat products derived from these unhealthy animals to the United States Department of Agriculture for distribution in the National School Lunch Program in violation of federal law and the express terms of their government contracts.”

The lawsuit goes on to also allege that the defendants – Hallmark and Weston – intentionally concealed “their illegal and fraudulent acts from the government, federal inspectors and compliance auditors.”

Officials from The Humane Society said they hope that the large settlement will change the way slaughterhouses treat their farm animals.

Leader said that, if the case did go to trial, the defense would have sought to exclude the video as evidence. The real issue, she said, was who should be responsible.

Because federal inspectors are required to regulate the cattle that enter onto the kill floor, the government should have known about the misconduct at the slaughter facility and should also be held partly responsible, Leader said.

“The misconduct occurred right under their noses,” said Leader.

The Department of Agriculture named Westland the 2004 – 2005 “Supplier of the Year.”

Furthermore, the defense team said that if the court case went to trial they would also call the video’s authenticity into question.

Watch: The Humane Society of The United States undercover video

They said the video showed an empty parking lot at one point, which was inconsistent with the way the businesses would have normally been operated.

They also said that one of the workers shown in the video appeared to be swearing at cows in English, when the man was a native Spanish speaker who normally needed a translator to understand English.

Overall, Edward Woods – Leader’s partner who was also involved with the case – said the video also misrepresented the slaughter facility.

“The other thing is there was some question as to the authenticity, editing and how extensive the animal mistreatment was because there were about five hundred cows a day that were condemned or set to the kill floor, and the depiction on this video – which was conducted over a six-week period by the Humane Society – showed a relatively small number of animals being mistreated,” said Woods. “Clearly mistreated, there’s no dispute about that.”

Attempts to reach Donald Sieveke, the attorney for the Hallmarks, were unsuccessful. A representative from his office said Sieveke will not comment on the case.