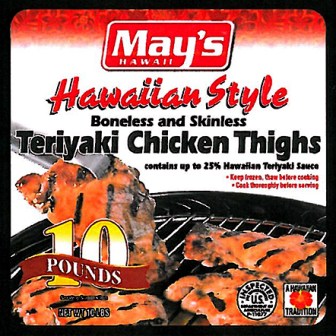 Provided by the Food Safety and Inspection Service

According to the Food Safety and Inspection Service, the Hawaiian company's chicken was recalled after inspectors found product packages that were bloated from gas.

Federal food-safety agencies listed more than half a dozen recalls during the past few weeks, citing recalls because of temperature abuse, bacteria contaminations and undeclared allergens among them.

On Dec. 24, Palama Holdings LLC of Hawaii announced a recall for nearly 25,000 pounds of both its raw and its frozen chicken products because they “may have experienced temperature abuse,” according to a U.S. Department of Agriculture’s Food Safety and Inspection Service news release.  The recall is for all teriyaki chicken products produced at the company’s Hawaii plant with best-by dates ranging from Sept. 24 to Nov. 6.

The “Class I” high-risk recall was prompted after inspectors discovered bloated packages that were “swollen with gases,” reported the news release.

The company distributed the recalled products for retail sale throughout Hawaii and to a nearby military commissary.

Yet, the more than 12-ton Palama Holdings chicken recall was not the largest poultry recall in December. Just a couple weeks earlier, Yauk’s Specialty Meats of Colorado issued a recall for more than 90,000 pounds of its poultry and various meat products because inspectors found evidence of rodent activity near the food.

On Dec. 19, Lee Bros. Foodservice Inc. of California announced a recall for 740 pounds of bacteria-contaminated sausage products distributed throughout Arizona, California, Oklahoma, Nevada, Texas and to other locations via phone orders. Food Safety and Inspection Service examiners found that the recalled sausage products – which included Lee’s Sandwiches brand Pork Sausages, and Pork and Chicken Sausages – were possibly contaminated with the Staphylococcus aureus enterotoxin. 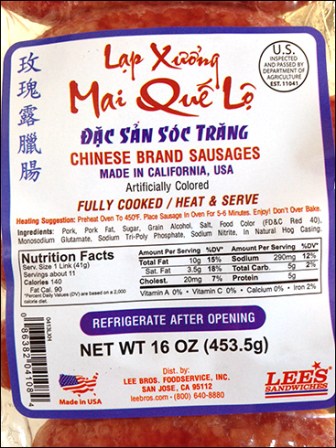 Lee Bros. Foodservice Inc. of California announced a recall because 740 of its Lee's brand sausage products were contaminated with a dangerous bacteria.

Like the Palama Holdings chicken recall, The Food Safety and Inspection Service categorized the sausage recall as a Class I high-risk recall.

Staphylococcus aureus is a common bacterium found on the skin and in the noses of up to 25 percent of healthy people and animals, according to The U.S. Centers for Disease Control. It is important to monitor in food because it can produce seven different toxins that cause fast-acting food poisoning.

Staphylococcal toxins are resistant to heat and cannot be destroyed by cooking.

On Dec. 20, Spokane Produce Inc. of Washington also announced a bacteria-related recall because about 60 pounds of its Victor’s Sesame Hummus with the best-by date of Dec. 29 was possibly contaminated with Listeria Monocytogenes. According to a U.S. Food and Drug Administration news release, the recalled products were only sold in Washington and Montana.

Inspectors find undeclared allergens in chocolate Santas and other candy

On Dec. 28, Giant Eagle of Pennsylvania announced a recall for its Candy Place Chocolate Santas packages because they contained undeclared peanuts, according to a Food and Drug Administration news release. Giant Eagle supermarkets in Pennsylvania, Ohio and Maryland sold more than 1,000 packages of the mislabeled sweets. 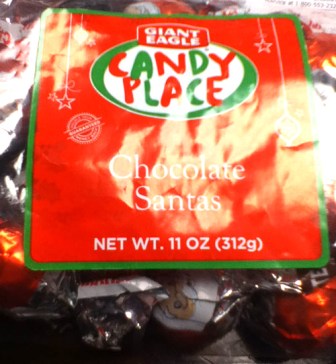 Chocolate-Santa candies from Giant Eagle of Pennsylvania and from Concertos in Chocolate of Colorado were recalled because of undeclared allergens, such as peanuts or milk.

On Dec. 18, Concertos in Chocolate of Colorado announced a recall for 450 of its solid milk chocolate Santas because they may have contained undeclared milk, according to a Food and Drug Administration news release. The company distributed the Santas throughout Colorado, New Mexico, Kansas, Utah and Idaho.

Finally, on Dec. 26, Bee International Inc. of California announced a recall for its packages of candy Sweet Spots because they may have contained undeclared egg protein, according to another Food and Drug Administration news release.

The Food and Drug Administration discovered the undeclared allergen after receiving a complaint from a family in North Carolina. A child allergic to eggs, wheat and milk ate the candy and had a reaction.

Each year, food allergies cause about 30,000 trips to emergency rooms and 2,000 hospitalizations, according to the Food and Drug Administration. About 150 people die from food allergies a year.