Agriculture producers have until Feb. 10 to respond to a mandatory U.S. Department of Agriculture survey focused on how farmers and ranchers throughout the country use their water.

The survey – officially known as the Farm and Ranch Irrigation Survey – comes at a time when many meteorologists and climate experts predict that temperatures and droughts will continue to increase in coming years, placing an even greater importance on water conservation and water usage. 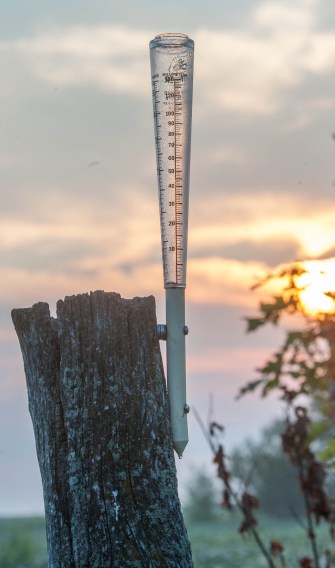 A rain gauge waits to measure rainfall near Mansfield, Ill., on Tuesday, Aug. 20, 2013. About a third of U.S. farmers and ranchers rely on irrigation methods in additional to any rainfall, according to 2008 Farm and Ranch Irrigation Survey data.

“Water is arguably the most important resource for agriculture and horticulture industries,” said Chris Messer, the census planning branch chief of the National Agriculture Statics Service, in a news release. “The Farm and Ranch Irrigation Survey will gauge farmers’ and ranchers’ stewardship of this precious resource and identify opportunities for new technology.”

Results from the most recently completed and analyzed survey – conducted in 2008 – estimate that about 207,000 U.S. farms were responsible for irrigating about 54.9 million acres of farmland, or an area slightly larger than that of Utah or Minnesota.

That amount was an increase of about 2.5 million acres of farmland from five years earlier.

And in the process of irrigating those 54.9 million acres in 2008, the survey found that producers spent about $2.1 billion on costs related to irrigation equipment, facilities, land improvements and technology. Farmers and ranchers spent about half of that total on replacing existing equipment.

Overall, slightly less than a third of all U.S. farmland depends on irrigation, according to the 2008 survey data.

Results from that survey also show that:

- From 2003 to 2008, the typical irrigation well’s depth increased about 5 feet to an average depth of about 243 feet, or slightly less than the length of a football field.

- More farmers tried to conserve water in 2008 than in 2003, as nearly 75,000 farms made changes to their equipment or management practices that significantly reduced or conserved water. Still, only about 10,000 farms used recycled water methods and less than 4 percent of all irrigated acres are irrigated with recycled water.

National Agricultural Statics Service workers administered the survey to U.S. agriculture producers who have previously indicated that they depend on irrigation. In 2008, that ground produced more than 217,000 records.

The survey’s expected national response rate is about 70 percent.

Similar to the national Census, people who receive a survey are required by law to respond.

Agriculture officials have been conducting irrigation surveys since 1890.