While many praise the $1 trillion Farm Bill for saving billions of dollars over the next decade, some skeptics worry the new bill will ultimately make it more difficult for farmers to secure loans and harder for aspiring farmers to enter the industry.

The bill, signed into law last week, continues the widely unpopular country-of-original labeling requirement for livestock producers, while reinforcing and restructuring crop insurance programs. To pave the way for most of the savings the bill creates, it also puts an imminent end to the billions of dollars of government backing from direct payment subsidies.

“[Direct payment subsidies are] certainly something that have been reduced over the years,” said Kevin Paap, president of the Minnesota Farm Bureau. “But farmers – I don’t care where you are or who you are as a farmer – farmers by far would rather get their income from the marketplace than from the government.”

Repealing the direct payment subsidy program will save nearly $50 billion from 2014 through 2023, according to estimates from the Congressional Budget Office.

While it may be true that farmers prefer market gains to government funding, direct payment subsidies were indeed an economically important assurance for many farmers. According to Paap – whose farm bureau did not oppose cutting the subsidies – getting rid of them will undoubtedly have an effect.

Heavily criticized as “welfare payments for farmers,” direct payment subsidies served as guaranteed sources of income that were meant to help stabilize farmers’ finances. In total, the subsidies distributed more than $4.5 billion to farmers each year, according to the Congressional Budget Office.

That meant that even if an uninsured farmer’s entire crop failed because of drought, the farmer could still count on $40,000 or $50,000 from direct payment subsidies.

With those gone, some agricultural economists believe that an already unpredictable industry that dies or thrives with the weather will become even more uncertain. 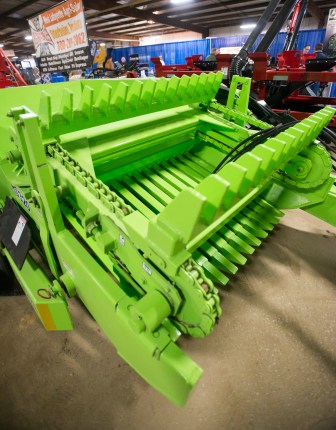 Loan officers used to consider a farmer's expected direct payment subsidy income when issuing operational loans to pay for things such as machinery and other equipment. When those subsidies are taken away, securing loans could become more difficult for farmers.

John Robinson is a professor and extension economist for Texas A&M University. He said that getting rid of direct payments may make it more difficult and more problematic for farmers to secure operational loans because loan officers will no longer be able to count on the regular, reliable source of income that direct payment subsidies normally provided.

“It’s the loss of something sure – of a certain insured payment – which matters maybe quite not so much to the grower’s finances, but it really matters a lot to the banker’s finances,” said Robinson. “Losing the direct payment isn’t going to cause any or many farmers to go under or stop farming, but it makes it harder to secure loans.”

Others believe that getting rid of direct payments will also make it more difficult for beginning farmers to succeed and more cost-prohibitive for people to break into the agriculture industry.

Leonard Johnson is a small-scale corn and soybean farmer from just west of Peoria, Ill. Johnson has been farming for more than 30 years. He said that eliminating direct payments will hardly impact him, but could greatly discourage young farmers who have to pay for their first combine and other pieces of farm equipment. 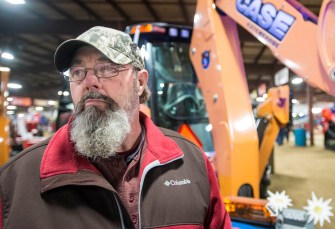 Leonard Johnson used to farm corn and soybean just west of Peoria. Here, he is pictured at the Midwest Ag Expo in Gifford, Ill., on Jan. 30, 2014.

“Young farmers coming into farming, without [direct payment subsidies] they would have an awful hard time getting started,” said Johnson. “Anything to help them lower prices and get machinery, tractors, combines – anything to get started – that’s a big help.”

Eliminating the direct payment program was the biggest chunk of savings included in the new bill.

In comparison, the controversial cuts from the Supplemental Nutrition and Assistance Program will only save about $8 billion during that same period.

Overall net estimates from the Congressional Budget Office predict the new Farm Bill will cut a total of about $16.6 billion throughout the next decade.

While Paap acknowledged that getting rid of the direct payment subsidies will affect agriculture producers, he said farmers in Minnesota largely approved of the cuts.

“Farmers understand that this government fiscally has got a lot of budget challenges,” Paap said.

Farm Bill’s biggest failure is not getting it done sooner

The long-delayed Farm Bill, which Congress has extended and debated during the past two years, cleared its final major obstacle on Friday when President Barack Obama signed it in Michigan.

Mark Gebhards, executive director of governmental affairs and commodities for the Illinois Farm Bureau, said he was “elated that we’re finally getting a bill to move,” while also acknowledging the difficulties of passing a nearly $1 trillion piece of bipartisan legislation.

Still, the years it took to pass a formal long-term Farm Bill and the months that farmers operated without even a Farm Bill extension took a toll on agriculture producers, Gebhards said. The legislation lapse created unneeded doubt and uncertainty for producers.

“There’s certainly been a tremendous amount of frustration within agriculture throughout the country because of the time that it’s taken,” said Gebhards. “We’ve been trying to get a bill – a final bill – for a number of years now, and you know it really is kind of mind boggling that it took Congress as long as it did to get to this point that they finally reach a compromise and get an agreed-to bill to move through the process.”

Farmers and producers in Minnesota expressed similar feelings, according to Paap.

He said it was especially burdensome for farmers and ranchers that suffered through environmental catastrophes and weather disasters. Instead of having concrete legislation and certain tools to proceed, they had confusion and uncertainty.

“You know, if I was a rancher in western South Dakota that lost everything in last October’s blizzard,” said Paap. “Had we had our work done and could have got [the Farm Bill] passed, those farmers would have had the tools to deal with that disaster.”

Last year’s October blizzard Atlas in South Dakota produced 70-mph winds and 3 feet of snow in some areas, according to the National Weather Service. It came days after weather had been in the 70s and 80s.

The South Dakota Stock Growers Association estimated that 15 to 20 percent of all South Dakota cattle were killed during the storm.

“This blizzard impacted lives and livelihoods across the region and USDA is committed to doing all we can to help ranchers during this difficult time,” said Michael Scuse, undersecretary for the U.S. Department of Agriculture’s Farm and Foreign Agricultural Services, in a news release. “Due to a lack of a new Farm Bill, our means to help are limited – but we will do all we can.”

This version of the Farm Bill – formally titled H.R. 2642, or the Federal Agriculture Reform and Risk Management Act of 2013 – was originally introduced in the U.S. House of Representatives by Rep. Frank Lucas (R-OK) in July of last year.

A temporary Farm Bill last expired at the end of September.

“I think the biggest failure of the bill was not getting it done when we should have got it done,” Paap said.