Madison, Wisc. -- After one of Madison's longest, coldest winters ever, swimming season is almost here — along with toxic algal blooms, bacteria, invasive milfoil and other pestilences of the lakes.

The Yahara lakes — Mendota, Monona, Wingra, Waubesa and Kegonsa — are no clearer than they were 30 years ago, despite intensive efforts to improve them. During that time, lake scientists said, the increased heavy rainfalls that are part of climate change most likely offset gains from better land use practices, by washing giant volumes of pollution into the lakes.

Murky Waters: this series was produced collaboratively by The Capital Times and Wisconsin Center for Investigative Journalism. It is part of Water Watch Wisconsin, a project supported by The Joyce Foundation.

“They are flatlining,” said Steve Carpenter, a University of Wisconsin-Madison professor who has studied the Yahara lakes since the 1970s. “There are no trends in the lakes. The lake water quality is not getting better. It’s not getting notably worse. It’s as if the interventions we’re doing are just holding the line, running in place like the red queen in Alice in Wonderland.”

Now, the well-studied Yahara lakes are home to bold new experiments attempting to fix them, potentially providing lessons for other troubled waters around the world. Some are technological, like using manure digesters to remove pollutants. Others rely upon voluntary efforts to prevent pollution instead of just punishing polluters.

Beaches are the public face of the lakes; they are where residents meet water quality up close. And two decades of data on beach closures — a useful if imperfect metric of water quality — also show no apparent improvements or other overall trends.

Algae and bacteria, both caused by pollution, continue to be the prime causes for dozens of beach closures each year. People are responsible for the pollutants, but how much gets in and how much trouble they cause are “largely driven by weather,” said Trina McMahon, a UW-Madison civil engineering professor who studies the lakes. Invertebrate populations also play a major role.

“From year to year, day to day, the situation is highly variable,” said Kirsti Sorsa, who has been managing the Madison and Dane County Public Health beach monitoring program since 2001.

Since 1996, the agency has closed the 16 beaches it manages more than 1,300 days (one day’s closure at one beach), averaging about 75 closure days each summer, according to an analysis by the Wisconsin Center for Investigative Journalism. The shutdowns ranged from 26 total days in 1999 to 193 days in 2009. The monitored beach season lasts about 100 days.

The years 2008 and 2009 were “awful” for harmful algal blooms, Sorsa said, noting that nearly 90 percent of the closures in those years were from algae problems. In recent years, bacteria have been more likely to cause closures.

But problems with the lakes’ water quality abound, as they do statewide.

Harmful algal blooms and bacteria cause state and local governments to caution beach users or close the beaches along the Great Lakes and at inland lakes across Wisconsin.

Algae can cause a slew of problems, including asthma-like symptoms; at worst, it can be fatal to people or pets.

Some bacteria cause gastrointestinal illness, but the strains of E. coli used in most beach tests are generally harmless and used as an indicator for other pathogens — bad bacteria, viruses, parasites or diarrhea-causing protozoa — that are harder to test for. 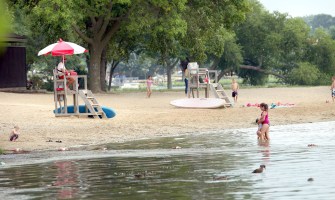 “This was not one of the worst ones, for sure,” said Kirsti Sorsa of Madison and Dane County Public Health, summing up the 2013 swimming season. At Vilas, where geese have contaminated the water, beach closures dropped significantly in 2013.

The Wisconsin Department of Natural Resources has listed or proposed to list 31 beaches statewide as “impaired” for exceeding the state’s E. coli water quality standard. That list includes 11 of the 16 Yahara lake beaches managed by the city-county health department.

Madison and Milwaukee-area beaches dominate the impaired list “just because we have so much data. The other ones are not as well known,” Sorsa said.

“Some people call here from local health departments asking what do you do about the cyanobacteria,” or blue-green algae, Sorsa said. “That gives me the sense that people don’t do much about it.”

From 2003 to 2012, Wisconsin beach managers reported the results of their tests for the bacterium E. coli from 127 Great Lakes beaches. The tests came back at or above a potentially unsafe level between 7 and 22 percent of the time each year.

At that concentration, the U.S. Environmental Protection Agency cites research suggesting there will be eight gastrointestinal illnesses for every 1,000 adult beach users. However, many factors make that estimate uncertain — for instance, children are more susceptible to illness and sand can also contain pathogens.

Between 2009 and 2013, the Wisconsin Department of Health Services received 144 complaints of human and animal illness associated with exposure to harmful algal blooms. The most common algae-related illnesses reported were gastrointestinal distress, rashes, and respiratory or cold-like symptoms. Health complaints came from at least 22 counties, all over the state; Dunn County had the most with 21.

The state “continues to suffer from insufficient funding levels to adequately maintain a comprehensive beach program,” according to a DNR report after the 2012 beach season.

Not easy being green 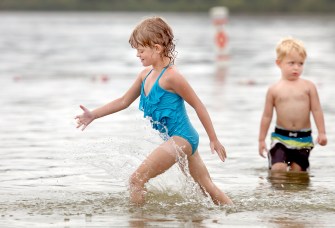 Tarah Delonay, 6, and her brother Ryan Delonay, 3, play at Madison’s Vilas Park beach on Sept. 1, 2013. At Vilas, where geese have contaminated the water, beach closures dropped significantly in 2013.

Even on a good day in Lake Monona, the beach water is generally too green for submerged swimmers to see their own feet. Peeling off their bathing suits later, they may well find that the suits and the skin underneath are covered with streaks of green, sludgy algae.

On a bad day, toxic algae scums float on the surface. Not all algae are bad — but both the kind that form scums and those that do not can produce harmful toxins.

They are symptoms of what ails the Yahara chain: Thousands of pounds of phosphorus flow into the lakes each year. About 80 percent of it arrives via manure or nutrient-rich soil from farms, and the rest from urban sources like dead leaves and construction erosion, according to Carpenter.

Carpenter believes it would be possible to cut the phosphorus running into the lakes to 10 percent of what it is now. The current, ambitious goal is to halve the pollution.

The Yahara watershed is one of the few places in the world where people are trying new ways to clean up the scourge of nonpoint pollution — that is, the kind that does not come from the end of a pipe, like agricultural and urban runoff. Nobody knows how to do it well, Carpenter said.

“People in the discipline pay attention to what happens in Mendota,” Carpenter said, noting that it is one of the most famous lakes in the world because of the long history of science and management.

“The world is watching, actually.”

One of those experiments is a regulatory tool. The Madison Metropolitan Sewerage District, under an EPA-driven hammer to reduce pollution that eventually flows into the Rock River, is trying something called “adaptive management.” Instead of installing expensive pollution controls at the sewage treatment plant, the utility can pay farmers to reduce nutrient pollution upstream.

Currently in a pilot phase, it is the first use of this tool in the nation to address point-source and nonpoint-source pollution.

As part of that effort, the sewerage district has coordinated many of the major players in the watershed — like municipalities, agencies, businesses and farmers — which is already a feat.

If adaptive management succeeds, it will aid another ambitious cleanup effort. A nonprofit environmental group, the Clean Lakes Alliance, has also drawn many players together and converged upon a 14-point plan to halve the phosphorus loading into each of the four Yahara chain lakes. The group plans to release its State of the Lakes report, assessing progress toward the phosphorus goal, at a Friday morning fundraiser.

Two manure digesters, one in Waunakee and one being built in Middleton, will together be able to handle 15 percent of the manure in the Mendota subwatershed. Digesters can separate phosphorus-rich solids from liquids; the solids can then be removed from the watershed or used in places where the nutrients in them will not endanger the waters.

The latest efforts have sparked some hope in several longtime lake watchers and researchers, including McMahon. There also are some promising biological signs. Blue-green algae species that began appearing in Mendota the past few years are characteristic of a healthy lake.

“I think it’s possible eventually,” McMahon said. “It’s just — is it on time scales that people would care about?”

Capital Times reporter Jessica VanEgeren contributed to this report. This series, Murky Waters, was produced in collaboration with The Capital Times. It is part of  Water Watch Wisconsin, a project supported by The Joyce Foundation that is examining water quality and supply issues statewide.
The nonprofit Wisconsin Center for Investigative Journalism (www.WisconsinWatch.org) collaborates with Wisconsin Public Radio, Wisconsin Public Television, other news media and the UW-Madison School of Journalism and Mass Communication.
All works created, published, posted or disseminated by the Center do not necessarily reflect the views or opinions of UW-Madison or any of its affiliates.